Autonomous Robot Dogs: Are These “New Surveillance Methods” Coming to a Town Near You?

Film series such as Terminator, Robocop, The Matrix, and others about weaponized robotics have captivated mankind for years. And now, it seems that we’re getting our very own, real-life version: robot dogs.

Should countries secure their borders? Absolutely.

The sole purpose of government is to protect the lives, liberties, and property of its citizens. A nation which refuses to guard its own borders sets all three of these items at risk. Governments are formed by people to protect these three items.

I say this so that the following will not be misinterpreted.

Is it chilling when a new weapon is introduced to humanity that has the potential to completely change the world of war? Again, absolutely.

That is what we’re seeing at the moment as autonomous robot dogs are currently being used to patrol the southern US border. As the number of illegal immigrants who have snuck across the border has absolutely skyrocketed over the course of the past year, it appears as if there are some who believe the solution to the problem is the implementation of autonomous security robots.

Currently being tested along the border is the Ghost Vision 60, a robot “dog” created by Philadelphia-based Ghost Robotics.

This new creation is currently being tested by the Department of Homeland Security’s Science and Technology Directorate to test “new surveillance methods.”

According to Brenda Long, the program manager of the Science and Technology Directorate, “ The southern border can be an inhospitable place for man and beast, and that is exactly why a machine may excel there.” This S&T [Science and Technology Directorate]- led initiative focuses on Automated Ground Surveillance Vehicles, or what we call ‘AGSVs.’ Essentially, the AGSV program is all about…robot dogs.”

(For information on how you can starve the best, check out our free QUICKSTART Guide here.)

The current robot dog in use is a 70-pound, 2.5-foot-tall dog with the capability to go across virtually any terrain that a human can, and in many cases, across terrain that would be too dangerous for a human being to traverse, such as steep slopes. It has a max speed of close to 7mph.

The robot dog is equipped with either night or thermal vision, and has the ability to host other “payloads” as well. The Ghost Vision 60 can either be set up to run autonomously, or it can be controlled by a man behind a computer screen miles away.

Though the current Ghost Vision 60 robot dog in use along the southern border is not hooked up to any weapons systems, and though there have not been any indicators that weapons systems will be attached to them in the near future, Ghost Robotics did recently unveil a robot dog with a weapon system mounted onto it: the Vision 60.

Engineers from #GhostRobotics have attached a sniper rifle with a thermal imager to the robops, which can shoot at a distance of up to 1200 meters. pic.twitter.com/kIKT7D4Nay

The Vision 60 is a robot dog that was recently shown at a business conference with what appears to be a sniper rifle/mini-gun system mounted on its back. The gun has a range of 1200 meters, 30x optical zoom, and the standard battery of thermal and night vision capabilities.

Where are these robot dogs now?

Any form of robot dog is still in the trial-and-error phase of human testing, but we have seen them in use at Tyndall USAF base in the past, as they helped with patrols, and they are being used in a similar manner right now at the border.

Currently, these robot dogs are patrolling pre-determined GPS coordinates which they walk back and forth between. The robots are capable of functioning in any weather conditions, and can currently cover an area of 7.5 miles off of a single three-hour charge.

When asked about the weapon systems that could be mounted on their robot dogs in the future, Ghost Robotics CEO Jiren Parikh said, “We don’t make the payloads. Are we going to promote and advertise any of these systems? Probably not.”

Whether displaying a Vision 60 robot dog with a rifle of some sort attached to its back at a conference is a form of advertisement or not is up to the reader’s discretion.

Parikh went on to say, ““Because we’re selling to the military, we don’t know what they do with them. We’re not going to dictate to our government customers how they use the robots.”

Science fiction has warned of this for years.

It appears that science fiction has once more served its purpose of warning future generations what could be in store. In Ray Bradbury’s Fahrenheit 451 the main character is actively hunted down by a technologically advanced robot dog which is created with the sole purpose of hunting down enemies of the state. It is Minority Report in which we see robot spiders hunt down those charged with “pre-crime.”

While an illegal alien truly is an enemy of the state, what is to become when these technologies are soon patrolling your streets rather than your borders? Remember, it was only two years ago when we saw autonomous drones equipped with facial recognition patrolling the skies of certain parts of the earth so that they could help enforce “public health” mandates.

One cannot but stop and think when witnessing these technologies about what the future may hold. Is the mockumentary Slaughterbots that far off? War always serves as a catalyst for the furthering of weapons systems.

Should a Russia-Ukraine war quickly grow global, should it be a cover for a series of covert operations against Americans on US soil, what would things in America eventually look like? Even if all of that never happens (though< I think it will), I think the way you see robot dogs currently being used in Australia could be indicative of what you will soon see elsewhere.

Do you think the use of autonomous robot dogs will only be related to illegal immigration? Or do you think these “new surveillance methods” are going to become widespread? And how long until they’re armed? Let’s talk about it in the comments. 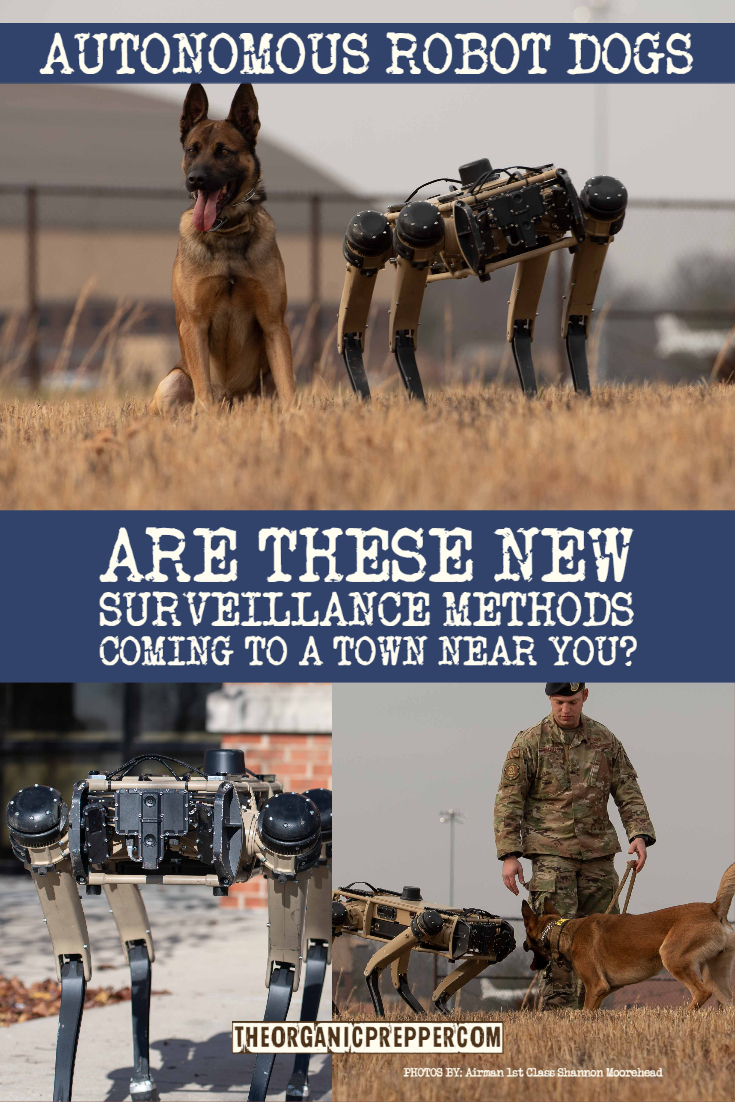