How Much Does It Cost to be a Character from James Rawles’ Book, Patriots? 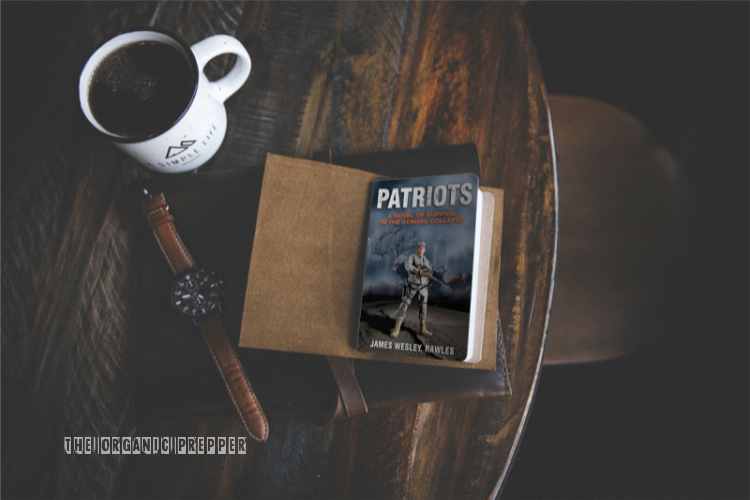 By the author of The Faithful Prepper and  Zombie Choices

Give the man his due. Rawles not only started the blogosphere off with family prepper and survival talk, but he also published Patriots,  a book which rapidly proved to be a best seller and is still selling plenty of copies. I walked by a copy of it in my local Barnes and Noble just the other day.

I’ve read through the entire series and have gone through Patriots 4-5x over the past several years, and many have noted that the series can often seem to read as a gigantic grocery list. Over and over again you’ll see reference to all the gear that the members of “the Group” have stowed away, and some of these lists can be quite extensive.

Some people have enjoyed this, some have not.

Either way, today I wanted to do something different. I wanted to take a look at what it costs to be a prepper in the Group of Patriots. Seeing that a complete cost analysis of every single member of the Group would be a mammoth undertaking, I wanted to focus on just one – which still proved to be a rather large undertaking. There’s a lot of lists, I’m telling you.

In particular, I wanted to focus on the Group’s gun nut, Dan Fong.

I’ve combed through the pages of Patriots, and to the best of my ability, I believe the below list is accurate. Undoubtedly, there are going to be items that I missed. Many times a particular piece of gear that all the members of the Group purchased isn’t mentioned until halfway through a narrative very briefly (witness the blurb about canning supplies on page 183).

In many other cases, we’re told that the Group made “group” purchases for items yet we’re not told what the cost was, how much was bought, or the percentage each member paid for such. I think you’ll find that if we solely focus on what we do know however, we have plenty of data to pull from.

We’re told on page 18 that Dan Fong has a collection of 29 guns. We’re not given the names of all of them, but from what we can gather, here is what Dan Fong owns in the gun department as well as the current price (or estimated current price) of each.

Holsters can easily cost $50 each, if not more. Cleaning kits are typically around $30. All this combined, $500 is a very conservative estimate here.

A low estimate of the total cost of all the guns, magazines, spare parts, holsters, and other firearm paraphernalia Fong had would come in at around $22,495. Keep in mind this is a very conservative estimate and it doesn’t take ammunition into account.

According to the book, it appears as if members of the Group had nine years to prepare from the time the Group was started till the time the hyperinflation and societal collapse commenced. This would mean Fong spent approximately $2499/year on gun-related purchases from the time he got into prepping until Day Zero.

If we follow what the book says, it appears as if Fong spent $568 in blades gearing up for the apocalypse. Once more, if we fall back on our 9-year timeline, this would mean Fong spent $63/year on knives.

From what I can tell, there are only two camp craft purchases that are explicitly listed being made by Fong (though he undoubtedly made more). There are numerous other brief references to camp-style equipment throughout the book (e.g. backpacks), but we’ll stick with what we know. This would mean $48/year was spent on camp craft equipment if we solely rely on what we know.

Not a perfect way of looking at things here, but we’ll stick with our pattern.

This is a very hard one to nail down. At the very least though, Fong spent $360, and I believe he likely had numerous TRC-500 radios, probably put $100+ into each, and likely spent $80+ on TA-1 equipment. We’ll stick with what we know though, meaning this is a very conservative figure here.

For Fong, this meant rebuilding the transmission and carburetor before moving on to replace the radiator, alternator, fuel pump, water pump, battery, voltage regulator, starter, solenoid, hose, belt, and suspension.

In addition, Fong put a flat paint job all over his new truck as well. My best guess here is that we’re looking at $12,000+.

Again, a very rough estimate is given here, but I believe $37,210 is a relatively stable number to look at here for Fong’s BOV purchases. If somebody knows more about vehicle repair than me, let me know your thoughts in the comments section. At the moment, I’m sticking with what I have here though.

$4134/year on car costs was what Fong would have spent then.

There are a number of clothing items that it’s mentioned Fong owned, but we’re not going to spend time looking at the entire wardrobe of the man. Instead, let’s focus on his battle dress uniform.

Again, this is likely a low number as Fong most likely had even more than two sets of BDUs if he was following the “one is none, two is one” theorem. However, we’ll once more work with what we have. This means he averaged out $34/year on clothing from Group creation to Day Zero.

Though it’s not specified, many of the Group bought the following two pieces of gear, and considering that Dan Fong was the local gun nut, it’s likely that he had the following as well.

Armor has grown less expensive since this book was published, but $500 for a carrier with full plates is pretty economical. $82/year was spent over the course of 9 years on armor.

Group Purchases of Food and Other Sundries

We’re never given the specifics, but we do know that the Group invested heavily in food, ammo, bandages, ni-cad rechargeable batteries, and canning supplies. Dan Fong would’ve partaken in the cost of all this, though it is noted that he tended to spend his money on ammo and guns rather than food. He was also a heavy proponent of eating rice.

Just to account for this area, let’s assume Fong spent $5000. That would cover the group purchases he had to make, his food (perhaps), and at least some ammunition. Another guestimate, but it’s the best we can do here.

This would mean Fong spent an average of $7458/year on preps from the beginning of the Group until Day Zero. We’ll leave that up to you as to whether or not that’s a realistic number to shoot for if you’re the average American man. It probably is important to note here that Fong wasn’t married and didn’t have any children, he barely spent any money on food throughout his bachelorship, and that he thus had the ability to spend whatever he wanted on whatever he wanted.

People out there with families, you’ll see what I mean.

Again, this isn’t a perfect number here – we aren’t exactly sure as to the pricing of everything – but this number will at least get us in the ballpark.

And so there you have it! If you can spend $7458/year, you can be just like Dan Fong in Patriots!

What are your thoughts on my number here? Do you think it’s accurate? Does anybody have any thoughts on the vehicle costs? Do you enjoy this style of article? Let us know in the comments below!