Would We Still Have Power and Water If We Had a Massive Coronavirus Quarantine in the US? 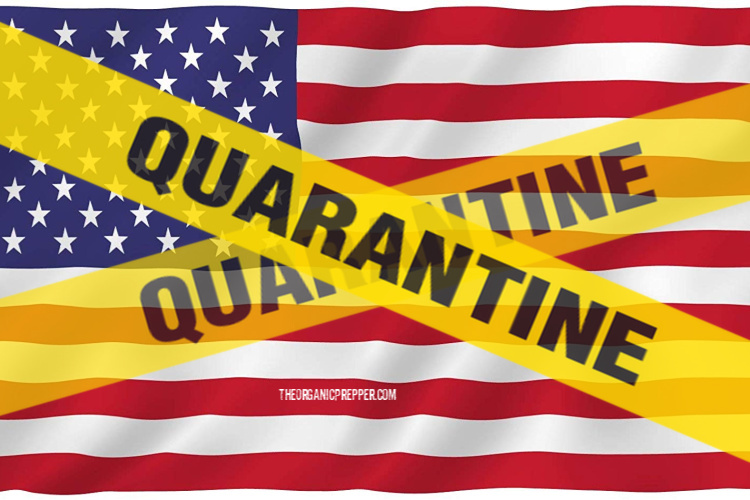 by Selco Begovic and Daisy Luther

How long do you think a pandemic quarantine could go on with power, running water, the internet, and trash pick-up continuing to run as normal?

If Covid-19 (also known as the Wuhan coronavirus or nCoV-2019) were to spread where you live as it has in China, it’s possible that extreme measures could be taken. Possibly even a China-style lockdown, where people are told to stay in their homes and where businesses are closed. I’m referring to something much more extreme than just a handful of us self-isolating.

While I certainly hope such a situation is unlikely, it’s something we should all consider a possibility and get  prepared for, just in case. Considering whether or not this would be an off-grid scenario would play an extremely important part in your preparations.

Selco and I had a very interesting chat about this after I’d raised the point in a group discussion. I thought you might be interested in our thoughts. Of course, there’s no way to know exactly how this might go down, so it’s pure speculation on our part based on the research of similar situations, knowledge of our systems, and personal experiences.

Would we have utilities and services during a quarantine scenario?

A lot of things are automated, which makes me believe we could potentially have a month or two of relative normalcy with regard to utilities, even if folks aren’t going to work. Garbage pickup would be another matter.

First things first, electrical power, natural gas, water, and the internet could run a long time automatically or with just a bit of input from someone on a computer. A pandemic isn’t going to fry our circuitry like an EMP would, for example. There’s nothing general-infrastructure-wise that would immediately compromise these utilities.

But this assumes that everything besides the pandemic is smooth sailing – that we won’t have any tornadoes, any hurricanes, any blizzards, any earthquakes, unfortunate bolts of lightning, or accidents. And it also omits manmade problems like riots that damage the infrastructure or even deliberate sabotage.

In a full-on pandemic, there’s likely going to be nobody to go out there and repair potential damage. And it’s possible that even if people were willing, they might not have access to the necessary supplies or equipment if these are items that they get on a “just-in-time” basis.

As for water, it could run for a long time but it might not be safe to drink. We’d need to be alert that there’s nobody there testing the tap water and adding chemicals. I don’t love chemicals like fluoride in my water but I do love essential chemicals better than I like amoebic dysentery and shigellosis and cholera. That being said, even if the water wasn’t drinkable right from the tap, it would certainly make life easier if folks not on septic systems could still flush their toilets, and water could be purified in a multitude of different ways.

The government would want utilities to remain functional.

Also, the government is going to WANT people to have utilities in the event of any kind of quarantine. People who can zone out in front of the television or play video games are going to be a lot tamer and easier to manage than people who are detoxing from their cell phones and Facebook and 24-7 television. If there’s a way to keep the lights on, I feel fairly confident the government would prefer that.

Karl Marx once said religion was the opiate of the masses. These days, I think television and Netflix wear that crown.

It also makes it easier for them to whisper sweet nothings of propaganda into our homes. “Don’t worrrryyyyy. It’s going to be okaaayyyyy. We’re here to heeelllppp.”

Garbage pick-up is another matter, and a very worrisome one. If we’re all confined to our homes, who is going to pick up the trash? Will garbage collectors be issued protective suits? It’s even possible that the military would be called in to perform tasks like this due to the risk of trash that could spread disease.

I’d imagine that out of all things, garbage would be one of the most likely to contain infectious materials – tissues from runny noses, paper plates folks have eaten from, all the stuff possible infected people had touched.

In videos from China, I haven’t seen a lot of trash piling up, so there, it appears that particular system is still running.

However, trash pick-up is what I would expect to be the first thing to go.

Will it come to this?

This is not a question that anyone could definitively answer.

It’s just like the utilities. What are the concurrent factors? What would have to happen for this to blow up and explode across the US as it has in China? What would have to happen to stop it from doing that? What are the wild card events that could hasten the spread? (Mutation, the holidays, another illness spreading that weakens immune systems, a disaster that compromises us to the point we can’t shelter in place?)

Because of the potential for this, we should focus on being prepared. (This book is an excellent resource specific to the Wuhan coronavirus.)

Could it happen? Yes.

Will it happen? Nobody knows.

Would we have utilities and services during a quarantine scenario?

A good question is what would happen with electric power and all other utilities once the SHTF.

And yes answer is not simple. It is based on type of event and severity of the event, but I think we can have some good guesses about it.

Power, running water, communications (internet, cell phones…) and similar utilities up to waste management in all modern societies are brought to an advanced level of functioning.

All that is so “modernized” in a way that most of us usually do not notice or actually do not care how it is being delivered to us. People don’t care how these things work.

I also do not know in depth how all that works, but I know that most of the utilities today are being brought to us in a very automated and interconnected way.

So, as a result, it works good, until it does not.

I think the price for that is the fact that when ONE thing goes out soon another thing will go out too. Even if something goes out FAR from you, it may still mean it easily may go out at your home.

Do not forget, things (services) no matter how modernized need to be maintained, so, if there are no people around to do maintenance, services will not work.

It depends on how bad the event is, and the control the government has over the event, and the society in which the event happening. It is a question of are people gonna be there to maintain services.

As an example, if some serious event is happening, are people willing to go maintain services or they are more willing to go home and protect their loved ones? They are all just humans, do not forget.

Also, if there is still a system functioning, the government or some kind of system, does it have enough power to FORCE people to maintain services? People will want to go home to their families.

The important fact is: if the event happening here is serious enough to bring problems to utility services, it is probably serious enough to make other services like the police force or medical services no longer working. So, as a result, the security situation will be deteriorated, so that is another obvious reason why people would want to be more with their families instead of at their job.

Now, this all may be different in different scenarios, I am talking about a complete or partial collapse of system.

In what kind of system you are living?

Is that system going to implement very harsh measures in order to maintain “things going on”?

You can not compare a probable situation in your country with a situation happening in another country if the systems are completely different.

If you are living in a system where you were raised to trust blindly in it, without too many freedoms (or any), with very hard punishments for not obeying, it may result in a very disciplined response in hard situations, both because of mentality of people and also because of fear from punishment. China has that kind of system.

In the end, I  do not have a clue how long utilities would last in your case wherever you are. I know in my case, the system and utilities would fall apart in a matter of a few weeks, and people would simply go home to their families because through experience, they know our system is fragile. They know it does not care for people, and it can turn against us very fast. And also people are kinda ready to survive without the help of the system. Or at least they are ready to try.

You alone can figure that how things would work in your case.

Join the conversation. How would you expect things to go where you live if the Covid-19 pandemic spread to the point that mandatory quarantines occurred? How long do you think basic utilities would continue to function? Are there factors we overlooked in our conversation? Are you prepared for the possibilities? Let’s discuss it in the comments. 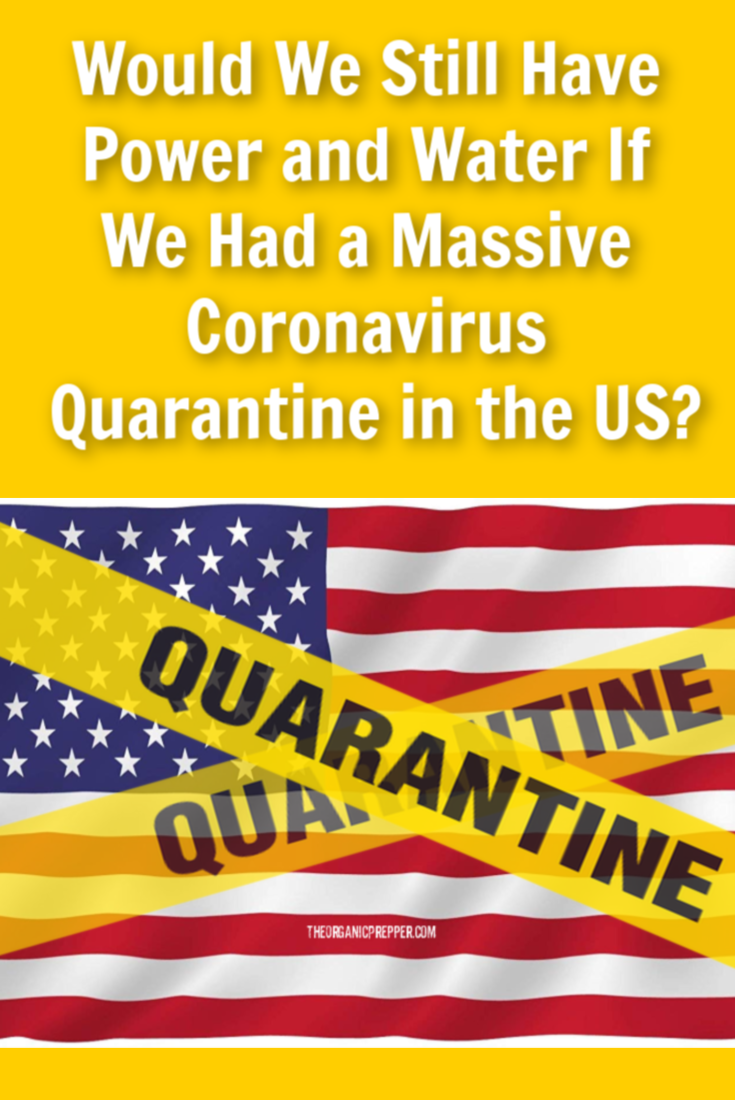