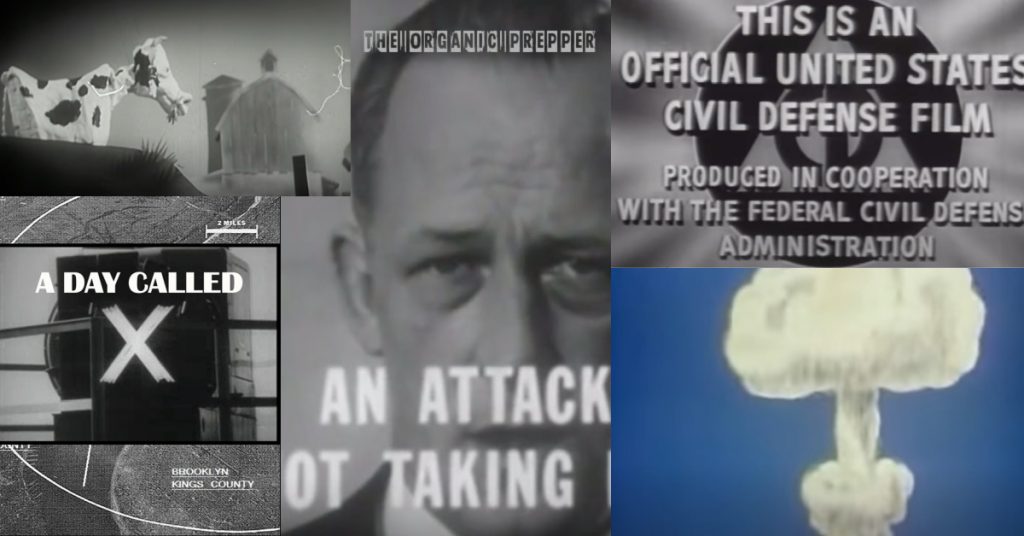 By the author of The Faithful Prepper.

There are a LOT of nuclear strike articles being written at the moment. A LOT. I guess just given the nature of our current times, I’ve had a morbid interest in looking over older nuclear PSAs (public service announcements). It’s part of the reason I started to look further into that old British PSA Protect and Survive.

There are a lot of these old PSAs when you start to look into them, and they’re rather dark but still pretty interesting. Here are a few of them that I found interesting that you may as well.

(If you’re looking for real, up-to-date yet down-to-earth nuclear survival information, be sure to check out our webinar tonight!)

This 1965 PSA on Civil Defense

I think that this is the most disturbing out of all the ones I’ve found so far. Bizarre paper mache-style marionettes are used to tell people what they are supposed to do to stay safe. I still haven’t figured out how they got that puppet on strings to blink.

The whole scenario is rather nightmarish, has something of a Howdy Doody vibe, and they cover a lot of material. I’m not sure I would be willing to follow the advice to get my cows to cover before I get myself to cover. I have a bit more value than an animal does, though I do understand the importance of protecting food sources.

I am interested in finding the booklets “Your Livestock Can Survive Fallout” and “Your Family Survival Plan” that the PSA advertises. They do recommend a 14-day supply of food as well, which coincides with Cresson Kearny’s statements that you’ll have to spend at least two weeks in any type of fallout shelter before you can even think to begin to go out for short periods of time.

I’m not exactly sure if this was supposed to be a PSA or what. It’s something of a combination of an old film noir detective movie combined with Andy Griffith, maybe? Andy Griffith minus the happiness, I suppose. You get a Twilight Zone ending too. So, this video is a mishmash of everything 1950s TV had to offer.

The whole video plays out as a story with enemy bombers being spotted over Canada on their way to the US (Portland, if I remember correctly). A narrator helps to move the script along as the people run about, trying to be as prepared as possible for whatever is coming. It’s a longer video that doesn’t really bring a lot of closure (did the bomb hit or not?), but it is pretty entertaining.

Protection in the Nuclear Age

A 1979 cartoon-type slideshow with some generic nuclear survival advice. You may find it more interesting than I did.

From 1975, this is the video accompaniment to that pamphlet that I had written about before. I think this is probably the most serious-looking PSA out of any of the ones on this list. There are some pretty eerie sound effects to show the British people what they need to be listening for, what I don’t think is great advice, and I think the cartoon atmosphere just kind of lends itself to the spooky atmosphere here.

(Want to learn how to store food? Check out our free QUICKSTART Guide to building a 3-layer food storage plan.)

You’ve probably already seen this one, as it made headlines just about a month ago when New York City pumped it out. You have a lady in front of a green screen telling people they need to close their windows if they think a nuclear attack is coming and all kinds of other nuke-related advice.

It’s not the green screen that makes this one so concerning. It’s the timing.

This one is from 1951 and has something of a Gone With the Wind type of vibe. There are actual actors portraying what it is that you’re supposed to do in the event of an attack, and from what I can tell, it looks like there’s actual footage of the atomic bombs that were dropped on Japan. It looks like there’s some actual aftermath footage here as well.

Self-Preservation in an Atomic Attack

From 1950, this one has a John Wayne western type of atmosphere with it. The audio throughout the entire thing is absolutely terrible as well, so be forewarned.

Fallout: When and How to Protect Yourself

This 1959 PSA looks like a Hannah Barbara cartoon. You can definitely pick up some Jetson vibes here. I can’t tell if that’s actual nuke footage involved in the video or not, though. I did enjoy the advice of settling down “and make the best of it” when you have to retreat to a fallout shelter to not be cooked to a crisp, as well as the advice of “don’t be discouraged.”

That, combined with the little smiling cartoon family as they prepare to survive a nuclear attack, was a nice touch. I’m also not so sure that a raincoat is a good way of protecting one from radiation. Alpha particles I could see, but gamma radiation? The ol’ raincoat isn’t going to do much for you there.

Are there other old nuclear PSAs you have found?

What have you found to be the eeriest, the most entertaining, and the most bizarre? Let us know in the comment section below.