Is the Nuclear Pamphlet “Protect and Survive” Still Relevant? 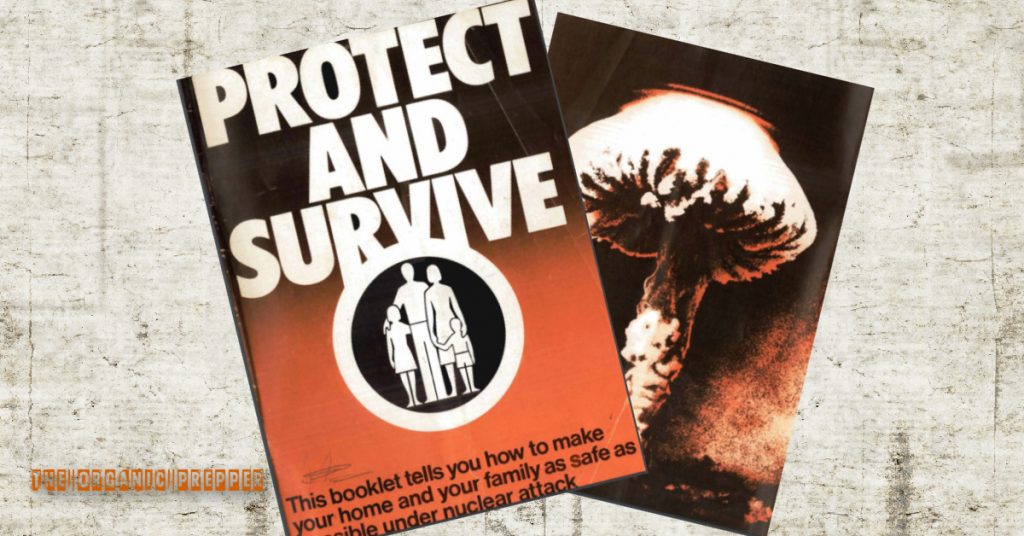 A few people within the prepper blogosphere have posted links to an old nuclear war survival manual quite a bit of late that I would hazard a guess that many have never heard of. It’s called Protect and Survive and was published by the British government in 1980.

Everybody knows of Cresson Kearny’s Nuclear War Survival Skills, but it is most certainly a big book filled with tiny font. If you are looking for something pamphlet-sized that’s about as easy to read and understand as it gets, I think that Protect and Survive does a fantastic job of communicating the essentials.

If you are looking for more modern information, please join our webinar next week in which Daisy talks with an Army NBC Specialist about how to protect yourself and your property from fallout.

That being said, the pamphlet has faced a rather tumultuous history.

For starters, it was never intended to be released to the public until a nuclear disaster was imminent. It was Harold Wilson’s British government that created Protect and Survive, wanting a clear and easy-to-read means of communicating to the British people what they were to do should there be a nuclear attack on the way.

The thought was that stockpiles of the pamphlet would be laid aside in storage, somehow, for a magical rapid dispersal across all of Great Britain in the moments before a nuclear attack was to take place. I’m not entirely sure how the British government thought they were going to accomplish this mystical feat, but that’s what the plan was.

The problem was that in January 1980, The Times published a series analyzing what England’s preparedness measures were against a nuclear attack. Keep in mind that this was in the midst of The Cold War, so there was a lot of angst and public fear over just what a nuclear attack could entail. The threat of nuclear Armageddon was constantly on the public’s mind as well.

A massive nuclear arms race was present, the Soviet Union was strategically positioning SS-20 missiles throughout eastern Europe, and the Cuban Missile Crisis was fresh on everybody’s minds.

And then came The Times’ piece, with an image of the front cover of the Protect and Survive pamphlet. It appears that the British government decided they needed to save face with a rapid release to the public, which is exactly what happened.

And then the critics came.

It seems that everybody had something negative to say about Protect and Survive. Personally, I think this is due to two factors: people were terrified, and there was a huge anti-nuke movement amongst grown-up hippies from the 1960s.

I’m not a nuclear physicist (wouldn’t that paycheck be nice), but when I compare notes with Cresson Kearny’s Nuclear War Survival Skills, I don’t see where the criticism of this pamphlet comes from. I think it has some pretty solid advice despite having poor taste in including a realistic picture of a mushroom cloud on the inside cover for no other reason than to show, “See? This is scary!”

I suppose, if anything, the notion of building an ad hoc fallout shelter inside of a home is where most people would find a reason to resort to mockery. If you’ve ever seen the movie Threads, where a nuclear strike hits England, the at-home fallout shelter the parents create (and die in) is very similar to what is discussed in Protect and Survive.

(How much food do you need to store in your house? Check out our free QUICKSTART Guide to building a 3-layer food storage plan.)

Perhaps the most interesting part of Protect and Survive to me, though, was how it details England’s response to a nuclear attack. When a missile is detected inbound – if the policy is the same – a rising and falling air raid siren will go off across the entire island nation.

If radioactive fallout is detected, three loud bangs or whistles in quick succession will be heard throughout the country (provided these systems still work/are in place). This is the signal for people to (hopefully) quickly build a fallout shelter.

When all of the threat of fallout or a nuclear attack has dissipated, the British people will be notified by a long and steady siren playing the same note.

If we play the “What If” game, I do think that there’s a lot of wishful thinking involved with this pamphlet in that it wouldn’t have gotten into the British people’s hands in time to do any good. I also think that an at-home ad hoc fallout shelter is a last-hope solution, though it does bear mentioning that Cresson Kearny outlined how to make one in his fantastic book as well.

There’s a reason that the uber-rich are building fallout shelters throughout the world. They work wayyyyyyyyyy better than a door, soil, and book collection that you’ve created a hobbit hole out of. I also don’t think that people would have enough food and water to last for the minimum two weeks that the pamphlet recommends staying in the hobbit hole. According to the American Red Cross, the average American only has three days of food in his home. I doubt that the English are much different there.

All that being said, I do recommend giving Protect and Survive a read.

I want to check out England’s Nuclear Weapons mentioned on the back cover of the pamphlet now as well but it appears impossible to find. Check out Protect and Survive, though, and then tell us what you think in the comment section below.