Hurricane Dorian Made Violent Landfall in the Bahamas: “You cannot tell…the beginning of the street, versus where the ocean begins.” 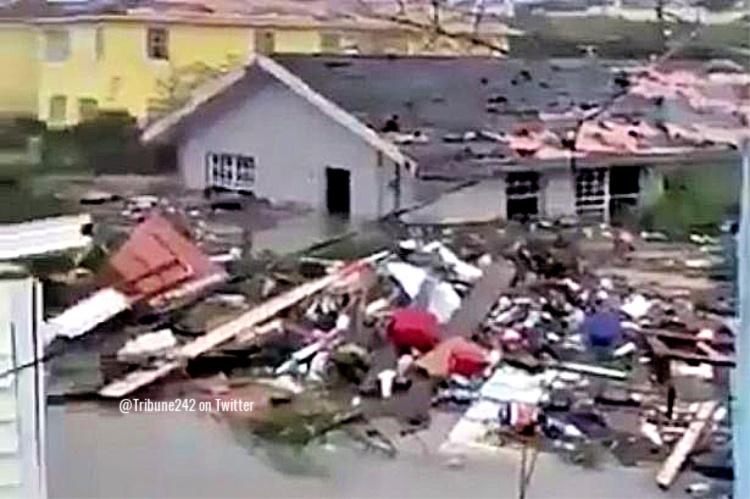 The Bahamas no longer looks like the sunny, clean tourist destination with rows of brightly colored houses that tourists fondly remember for years after their visit to the island nation. Yesterday, Hurricane Dorian struck with a fury that was unprecedented.

When the Category 5 hurricane made landfall on Great Abaco Island, east of Miami, on Sunday at 2 p.m., Dorian’s maximum sustained winds were 185 mph — an Atlantic hurricane record matched only by a storm that struck the Florida Keys in 1935, the National Hurricane Center said.

At 3 a.m. Monday, the center warned of the ongoing “life-threatening situation” as the hurricane lashed the island with 200 mph wind gusts and a storm surge 18 to 23 feet above normal tide levels.

“These hazards will continue over Grand Bahama Island during most of the day, causing extreme destruction,” it said, referring to the northernmost island of the archipelago. (source)

This video shows the devastation in one small area during the eye of the storm.

Keep in mind that in the video above, the storm is not over – they’re about halfway through, in the peaceful “eye” of the storm. They’re going to get hit again with the same power as before. The National Hurricane Center expects the Bahamas to be battered by Dorian for the rest of the day.

Here’s what people from the Bahamas are saying.

“Never in the history of the Bahamas have we seen 180 mile per hour winds, and 200 mile an hour gusts. We are praying that they can find safe shelter, and they can make it through the storm.” (source)

The Bahamian Prime Minister, Hubert Minnis, said this was the worst day of his life as broke down in tears during a press conference.

“This is probably the most sad and worst day of my life to address the Bahamian people,” he said during a press conference at the headquarters of the National Emergency Management Agency (NEMA).

“As a physician I’ve been trained to withstand many things, but never anything like this.

“We’re facing a hurricane… one that we’ve never seen in the history of The Bahamas, with wind velocity as high as 180 mph, with gusts in excess of 200 mph.”

He noted that Bahamian homes are built to withstand winds of up to 150 mph.

“So this will put us through a test that we’ve never confronted before,” he continued, adding that storm surges are projected to be as high as 20 feet.

“This is a deadly storm and a monster storm.”

Minnis issued an evacuation order to residents in vulnerable areas on Friday. He pleaded with residents again on Saturday to leave their homes. He noted today that many people did not heed his warnings.

“I can only say to them, that I hope this is not the last time they will hear my voice and may God be with them.” (source)

Leigh Lamattina-Davis, a resident of Marsh Harbour, a town of roughly 6,000 on Great Abaco, described the direct hit as “total devastation.”

“I am lucky to have half a house,” she said in a text message with NBC News. “My neighbors are demolished.”

Lamattina-Davis, who’s lived on the island for 25 years, said that power lines were down, car alarms were blaring and people were “wailing.” (source)

Here’s what it looks like in the Bahamas right now.

In this video from CBS, the reporter speaks with Joy Jibrilu, the Director-General of the National Ministry of Tourism from the Bahamas as she reports the scene from the ground. It also shows chilling footage of the devastation wrought upon the islands.

Warning: This video contains content which may be distressing for some people.

As the storm continues, some people are still refusing to evacuate.

Thus far, the storm has devastated the island of Abaco and it isn’t over yet due to the slow movement of the hurricane. Prime Minister Minnis said:

“Marsh Harbour area of Abaco parts of it [are] already underwater,” he said. “In some areas you cannot tell the difference as to the beginning of the street, versus where the ocean begins. They are being hit by the brunt of the storm.” (source)

Now Dorian is headed toward the western islands. And if people refuse to evacuate, Minnis has said he will not send people into harm’s way to rescue them.

“Grand Bahama, those individuals in the western area, this is your last warning to move to the central area of Freeport,” he said.

When asked about rescue efforts, Minnis said, “Winds of 180 mph, if I ask you tomorrow to go and rescue those people, would you go?”

“I don’t think anybody is that fool to go there, nor would I subject their lives to that. Especially when individuals were warned repeatedly to move.” (source)

Seeking shelter on a flat island is not a simple task. It’s expected that there could be a large death toll and massive devastation in the Bahamas once the storm finally, slowly, passes.

And Dorian is headed here next.

And then Dorian will be headed to the US mainland, slowly picking up even more ferocious power. The SHTF of some of our own people may not be far behind.

If you are on the East Coast, please take the next day or two to get prepared or better yet, to evacuate. If you can’t find the supplies you need, here are some ideas for shopping when the shelves are bare. Also, remember that storms of this massive scale won’t just be limited to affecting people near the coast – they can affect people hundreds of miles inland. Be prepared for the possibility of lengthy power outages.

The storm has shifted repeatedly and experts still aren’t quite certain where it will make landfall in the United States. The next turn made by the storm will provide a better idea of where it’s headed.

We at The Organic Prepper wish the very best possible outcome for the people of the Bahamas and we strongly urge our readers on the East Coast to get ready for a catastrophic event. Subscribers, please watch your email for a special 106-page download today that I’ll be sending for free both this morning and this afternoon.