Is the FBI Trying to Create a New Generation of “Hitler Youth” or What? 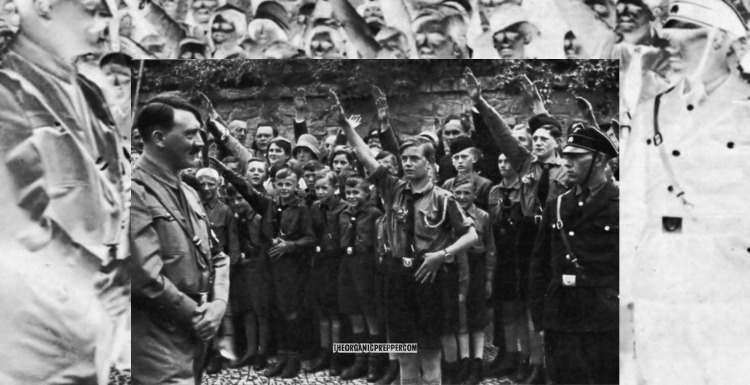 Author of Be Ready for Anything and The Blackout Book

The Federal Bureau of Investigation appears ready to create a new generation of Hitler Youth, turning family members against one another and asking citizens to be on the lookout for any relative, coworker, or friend who might be “mobilizing toward violence.”

Yep, I went there. Straight to Nazi-land in the very first sentence.

Family members and peers are often best positioned to witness signs of mobilization to violence. Help prevent homegrown violent extremism. Visit https://t.co/bql36iSbig to learn how to spot suspicious behaviors and report them to the #FBI. #NatSec pic.twitter.com/ZwJp5h5bWD

Welcome to the new Reich, I guess? Let’s take a look at the parallels.

Who are these “Hitler Youth” of whom I write?

If you snoozed through this history class in high school, during World War II, Adolf Hitler wanted to begin indoctrinating children into Nazi ideology at an early age. So, two groups were created: Hitler Youth for boys and for girls, The League of German Girls.

The US Holocaust Museum website raises these key points about the groups.

A combination of peer pressure and coercion caused the groups to grow rapidly. Hitler Youth was modeled after its counterpart for grown-ups, the so-called Brown Shirts. By 1939, a new law required every German between the ages of 10 and 18 to join the group so they could Nazi-fy even more kids.

Beginning in 1933, the Hitler Youth and the League of German Girls had an important role to play in the new Nazi regime. Through these organizations, the Nazi regime planned to indoctrinate young people with Nazi ideology. This was part of the process of Nazifying German society. The aim of this process was to dismantle existing social structures and traditions. The Nazi youth groups were about imposing conformity. Youth throughout Germany wore the same uniforms, sang the same Nazi songs, and participated in similar activities.

One way the groups did this was to use the Hitler Youth movement to dominate the lives of Germany’s youth. Belonging to the organization was a significant time commitment. Hitler Youth members had to attend regular meetings and events. These interfered with other priorities, such as church and school.

This time commitment and regular exposure to Nazi ideology weakened the influence of parents, teachers, religious figures, and other voices of authority. (source)

You’ll probably be unsurprised to hear that the young people were encouraged to snitch on family members, churches, and teachers that were not supportive of Nazi ideology.

Meanwhile, ratting out your family members is praised on social media.

After the events at the Capitol on January 6th, people proudly announced they had snitched on family members and coworkers who they recognized from videos and photos of the event.

Teen Vogue praised Helena Duke, 18, for outing her own mother on Twitter during the investigations. Helena told the interviewer how awesome the response to her viral tweet was.

Overall, it has been really heartwarming, the support I’ve gotten from people all over the nation opening up their homes and telling me they’re welcoming me into their families. Obviously, there has been backlash from Trump supporters, but it’s been very minimal. The number of people who have been able to relate to this situation is insane. It’s just crazy to think so many of them are like, ‘You’ve inspired me’…because I’m just an 18-year-old girl. (source)

It’s certainly heartwarming to open your own mother up to potential criminal charges on Twitter. Way to go, Helena!

She’s not alone. Jackson Reffitt is another example of a teen who snitched on a family member. He contacted the FBI about his father before the event on January 6th but it’s unclear what the FBI did with that information.

Jackson Reffitt told investigators that his father returned home on January 8 and said he stormed the Capitol, then threatened his son and daughter not to turn him in.

Jackson Reffitt said his father told them, “If you turn me in, you’re a traitor, and you know what happens to traitors … traitors get shot.”

Guy Reffitt’s wife told investigators that he was a member of the Three Percenters, a far-right extremist group.

Jackson Reffitt told The Times he wasn’t staying at his family’s home but didn’t say where he was staying out of fear for his safety. He said his family learned from his CNN interview over the weekend that he had reported his father weeks before his arrest.

He also started a GoFundMe to help with his college fees. It had raised over $76,000 as of Sunday night. (source)

If Guy Reffitt threatened to shoot his kids, that’s obviously not cool and does not qualify him for father of the year. But Jackson has been rewarded with more than $150K at the time I wrote this article, which should pay for not only college, but therapy, too. Outing your own family apparently pays really freaking well. So it seems that now, snitches don’t get stitches, they get hundreds of thousands of dollars.

And who did Hitler Youth grow up to be?

So let’s go back in history again. What was the future of the Hitler Youth? Historically, the boys grew up to be “Brown Shirts” and the girls married them and raised Nazi babies, indoctrinated from the cradle.

Who were the Brown Shirts?

The SA — Sturmabteilung, meaning ‘assault division’ — also known as the Brownshirts or Storm Troopers, was a violent paramilitary group attached to the Nazi Party in pre-World War Two Germany.

The SA was instrumental in the Nazi’s rise to power yet played a diminished role during the Second World War. The Brownshirts are infamous for their operation outside of the law and their violent intimidation of Germany’s leftists and Jewish population…

…Hitler formed the SA in Munich in 1921, drawing membership from violent anti-leftist and anti-democratic former soldiers (including the Freikorps) in order to lend muscle to the young Nazi Party, using them like a private army to intimidate opponents. According to the Nuremberg Military Tribunal, the SA was ‘a group composed in large part of ruffians and bullies’…

…Speaking politics in public was potentially a dangerous matter at the time. Recognisable by their brown uniforms, similar to those of Mussolini’s Blackshirts, the SA functioned as a ‘security’ force at Nazi rallies and meetings, using threats and outright violence to secure votes and overcome Hitler’s political enemies. They also marched in Nazi rallies and intimidated political opponents by breaking up their meetings. (source)

Gee…that sounds sorta familiar. Kind of like Antifa. Who incidentally, calls the rest of us Nazis, has violent and destructive rallies, and strives to intimidate those with other opinions.

But what do I know? I’m just a humble libertarian blogger.

We are watching history repeat itself.

We all know that saying, those who don’t know history are doomed to repeat it. Well, it seems that some (cough – current administration – cough) know history and they’re taking notes so they can repeat it. Am I saying this is comparable to the Holocaust? Of course not. Not yet. But we’re on a very slippery slope right now and picking up speed to a place rife with suspicion, fear, and hatred. It’s like Selco said about the Balkans – as a lead-up to the war, people were manipulated, turned against one another, and bombarded with hate and fear.

It’s a dangerous time to be opinionated. You risk losing your income, your family (if they’ve been indoctrinated), and potentially your freedom. Holding an opposite political opinion is now considered domestic extremism. We’re encouraged to snitch on each other about darn near everything. We are threatened, blacklisted, and canceled.

What are your thoughts on this? How do you feel about family, friends, and coworkers being urged to rat out the people in their lives who think differently? Do you see the historical parallels? Let’s talk about it in the comments.