Snitchgiving: Americans Are Being Urged to Report Families Gathering for the Holiday 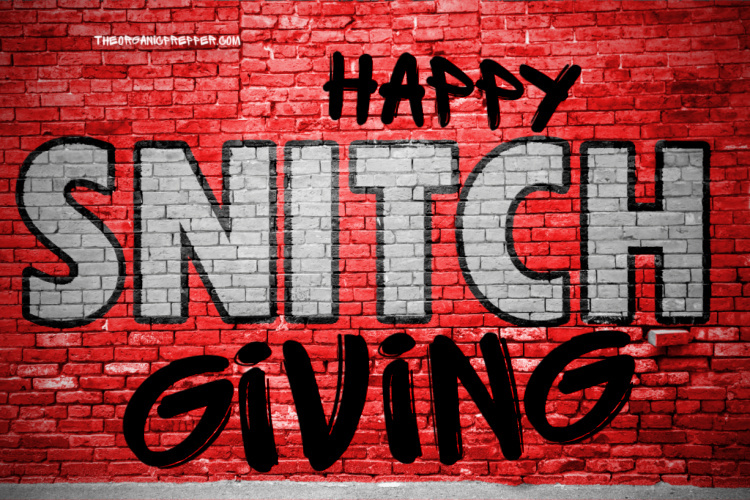 Imagine you’re sitting around the table with your family, inhaling the aroma as grandpa begins to carve the turkey, and there’s a knock at the door.

Is it a late guest? A neighbor dropping by?

No, it’s a health official or the police there to quell your gathering because somebody snitched on you for making the decision to spend time with the people you love.

It certainly sounds dystopian, doesn’t it? Or like something from a country under enemy rule? But it is indeed the United States of America where government officials are urging people to rat out their neighbors for having more visitors on Thanksgiving than they see fit. Stay up to date with all the insanity by subscribing here.

We’ve already talked about the massive overreach of governments telling people how they are or are not allowed to celebrate Thanksgiving in their own homes. Now let’s take it up a notch while watching our neighbors get turned into Brownshirts for “the greater good.”

Lots of folks are willing to narc on their neighbors.

Don’t fool yourself into thinking your neighbors wouldn’t do such a thing. More than a third of the people who took part in a Rassmussen poll would rat out the folks next door in a heartbeat.

Thanksgiving is just around the corner, and this year promises to be an enjoyable and festive day of “narcing out” your beloved neighbors!

According to a 2020 survey by Rasmussen, 36% of American patriots would be willing to call the cops on their neighbors if they noticed an egregious violation of government-mandated social-distancing rules. (source)

Here are just a few examples from the headlines. This list is by no means comprehensive. Totalitarianism is spreading faster than the virus.

The Michigan Department of Health and Human Services (MDHHS) wants to “save lives” by requesting gatherings be limited and relying on individuals to report non-compliance.

Under this order, indoor residential gatherings are limited to two households at any one time. However, MDHHS strongly urges families to pick a single other household to interact with over the next three weeks, consistent with new guidance released by the department. The order is aimed at limiting residential and non-residential gatherings where COVID-19 spreads rapidly. (source)

People should create “social pods” (I swear I could not make this up) to determine with whom you can “safely” spend time. 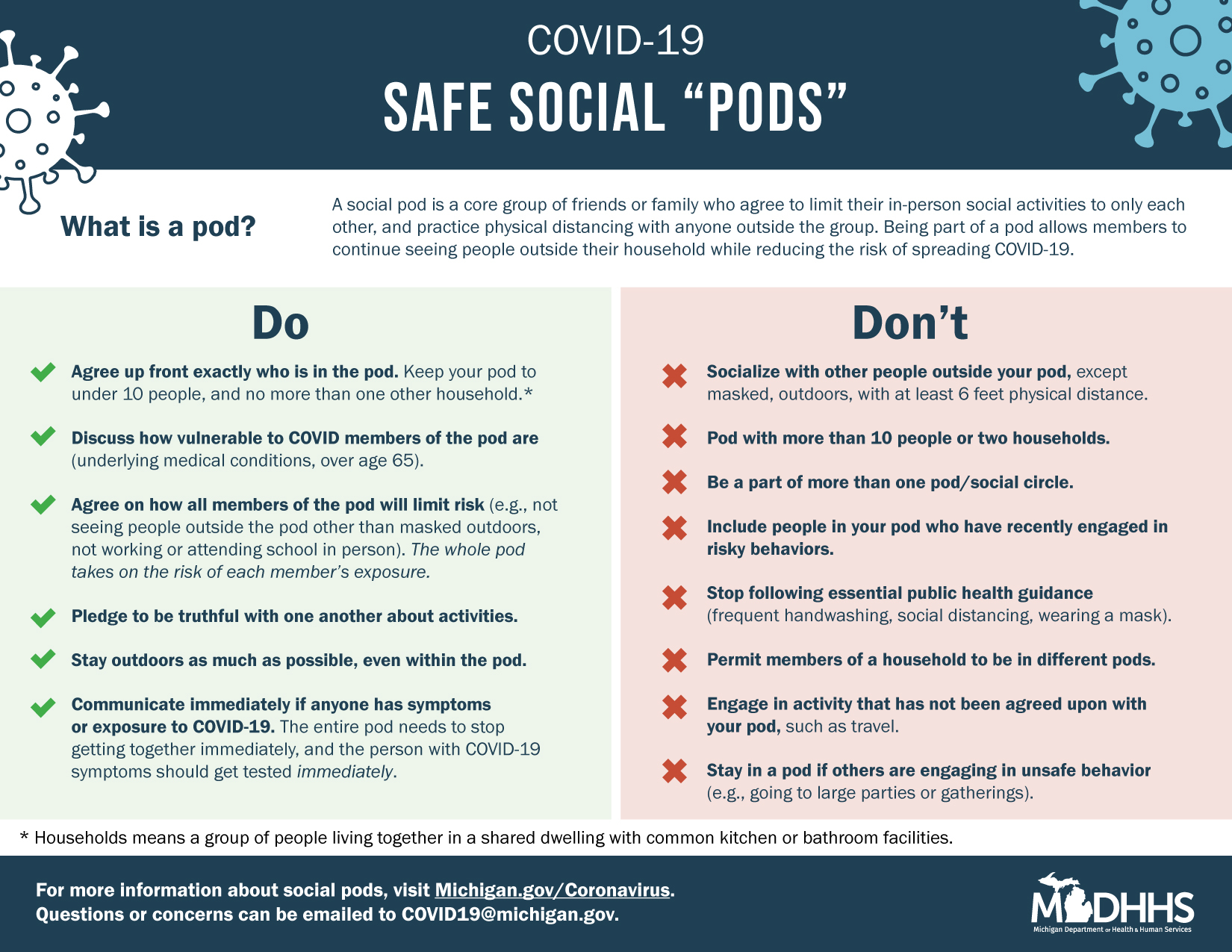 If you disobey and are busted having more than two households together at a time, you could face misdemeanor charges, thousand dollar fines, or even imprisonment.

For violations, MDHHS set forth rules instituting a civil fine up to $1,000. Violations may also be treated as a misdemeanor punishable by imprisonment for up to six months. Michigan’s official website also provides information for individuals to report violators to the state.

“If MDHHS receives an allegation of a violation of the department’s order, the department will refer the matter to the local health department or law enforcement,” said Lynn Sutfin, spokeswoman for MDHHS, as reported by Michigan Capitol Confidential.

“The first remediation method is to discuss the situation with the person responsible for the violation and attempt to resolve the situation without issuing a citation,” Sutfin told Michigan Capitol Confidential. “The local health department or MDHHS — as a referral from the Michigan State Police — may issue an administrative citation for violating the department’s order. The department hopes that residents will do the right thing and follow these orders to save lives and protect their family, friends and community from further spread of COVID-19.” (source)

The Albuquerque PD is spread thin but they’ll still dispatch officers if a large gathering is reported.

Because of COVID health concerns, the state public health order does not allow large gatherings. That includes Thanksgiving. KOAT asked how APD would handle it if someone called to report neighbors having a large gathering.

“It would ultimately be dispatched but it would be a lower priority than an emergency call with somebody being injured or a crime in progress,” said APD Deputy Chief Mike Smathers.

He says APD would make sure violators are aware of health concerns.

“To hopefully just educate people but if it came to it we would have to enforce the public health order,” Smathers said.

He said if people are warned but continue to disregard the health order, they could face a $100 fine. (source)

So remember, it’s cheaper to get busted in New Mexico than in Michigan.

New York Gov. Andrew Cuomo has said no more than ten guests can be present in a household but that enforcement is up to individual local authorities to enforce the mandate.

Of course, as is the case with any law enforcement agency, the Niagara County Sheriff’s Office would investigate a complaint if one were lodged and provided it had someone available to respond.

When asked what a deputy might do if someone called in on a neighbor and alleged they had more people in their home for dinner than Cuomo’s executive order would allow, Filicetti replied, “If we responded to that type of complaint, we can certainly advise a homeowner of what the new protocol is. But as far as taking enforcement action, I just don’t see that.”

Filicetti said none of his deputies will be directed to enter homes and count heads, or order anyone away from the Thanksgiving table.

Filicetti noted this is also in part because his department has yet to receive any enforcement guidelines from the state when it comes to gatherings in private homes. (source)

Don’t hold your breath on New York remaining mellow on enforcement – NYC wants to pay people to snitch on those who park illegally and Mayor de Blasio already tried to start a tip line for social distance violators, so it’s not a huge stretch of the imagination to believe they’d also welcome Thanksgiving snitching.

Governor Kate Brown of Oregon heartily encourages citizens to call the cops and rat out their neighbors who have more than 6 people gathered.

Days before Thanksgiving, Oregon Gov. Kate Brown said she believes residents who know their neighbors are violating the most recent round of COVID-19 protocols, which includes capping the number of people allowed in your home at six, should call the police.

“This is no different than what happens if there’s a party down the street and it’s keeping everyone awake,” Brown said in an interview Friday. “What do neighbors do [in that case]? They call law enforcement because it’s too noisy. This is just like that. It’s like a violation of a noise ordinance.” (source)

The University of Chicago

Reporting your fellow humans has never been easier than it is at the University of Chicago, where they’ve got a handy-dandy form you can fill out and snitch anonymously.

Please make sure you call 123 (on-campus phone) or 773.702.8181 (off-campus phone) for accidents to ensure the appropriate emergency response personnel are notified.

Involved individuals, supervisors, affected persons, or witnesses can submit reports. Anonymous reporting is available for events that do not require medical treatment. For more information about UCAIR, visit the FAQs page.

Please use this form to report any concerns about COVID-19 related public health violations (including anonymously, if preferred), such as:

Just in case teaching university age kids to snitch isn’t indoctrinating our youth early enough, Vermont has upped the game. Vermont has prohibited all gatherings of more than one household and Governor Phil Scott is urging schools to interrogate the kiddos when they return to school after the holiday.

Unfortunately, we know some will still get together and schools have asked for help. @VTEducation will direct schools to ask students or parents if they were part of multi-family gatherings and if the answer is yes, they'll need to go remote for 14 days or 7 days and a test. 9/

According to Governor Scott there’s absolutely no excuse to have an in-person Thanksgiving this year.

We also advise businesses to consider asking employees to quarantine if they don't adhere to gathering restrictions. This isn't a way around the ban or an excuse to get together. The more we adhere to this policy, the faster we’ll lower case counts & ease up on restrictions. 10/

At least one person in Vermont is grateful for the Stasi…I mean Mao…I mean Gov. Scott…for getting children to snitch on their parents. She made her thoughts known with this fawning reply.

Thank you. Many people seem to feel like they are an exception. If they are asked directly and have to take responsibility, maybe it will help them do the right thing.

Vermont Education Secretary Dan French told the Burlington Free Press that state officials hope that families will be honest in answering their questions about Thanksgiving plans.

“Schools operate on trust with their parents and their students, and we’re hopeful this guidance will give them some additional tools to help everyone do the right thing and keep school safe,” French said.

The outlet noted that the rules against households interacting does not apply in the workplace, at retail stores, or in schools. (source)

With all the mistrust already brewing in our nation, this will be like throwing gasoline onto the fire.

Is there encouragement to snitch on the neighbors where you live? Would you ever report a neighbor for having a family gathering? Let’s talk about it in the comments.