Cashing in on Covid: Facial Recognition and Thermal Imaging Techs Are Booming at the Cost of Your Privacy 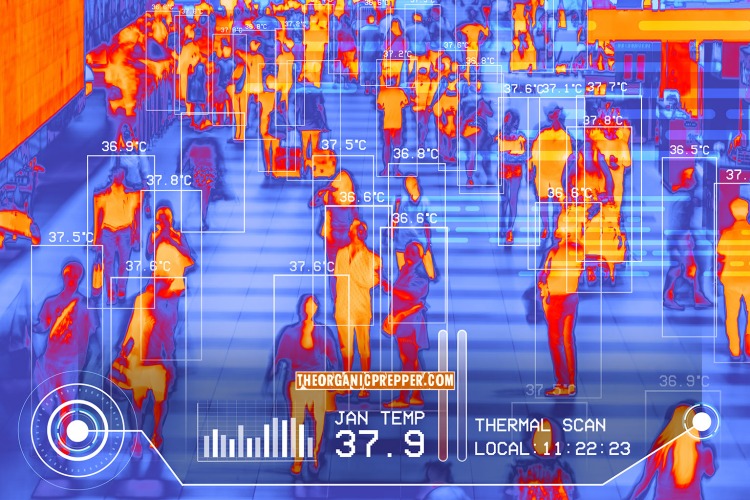 The COVID-19 pandemic has proven to be the biggest gift possible for tyrants all across the globe. From economic power grabs made by corporations and the incineration of basic civil liberties, the ruling class has introduced itself as the arbiters and dictators of virtually all human interaction.

And the surveillance industry has also benefitted massively from the pandemic.

For instance, facial recognition technology is being rolled out at an alarmingly fast pace. The tech is more and more exact in its capabilities and no longer handicapped by mask wearing or face coverings. In a report by the Department of Homeland Security released in early January 2021, the department admitted to having conducted tests regarding the efficacy of facial recognition technologies in relation to mask wearers.

The test was administered by the DHS Science and Technology Directorate and were conducted as a part of STD’s Biometric Technology Rally, an event held during the fall at the Maryland Test Facility. DHS claims that the success rate for this technology could reduce the need for passengers or travelers to remove their masks at airports or ports of entry.

The third annual rally evaluated the ability of biometric acquisition systems and matching algorithms to reliably collect and match images of individuals wearing a diverse array of face masks. Previous rallies show biometric systems can excel at rapidly processing high volumes of travelers using face recognition. This year’s focused on using such systems to detect and recognize travelers without asking them to remove their masks, thereby protecting both the public and frontline workers during the COVID-19 era.

The event included 10 days of human testing which involved 60 facial recognition configurations (which used six face and/or iris scanning systems with 10 matching algorithms) and took advantage of 582 “diverse” test volunteers that represented 60 countries. The systems were then evaluated based upon their ability to take images of each volunteer reliably without masks, processing time, and overall satisfaction.

So much for the theory that “at least the masks will make it harder for them to use facial rec on us.”

Then there’s thermal imaging, too.

But that’s not the only technology that is booming as a result the meeting between the “pandemic” and the surveillance state. Thermal imaging is also in demand as governments across the world begin deploying the technology at airports, railways, and public gathering spaces. The technology is designed to measure a person’s body temperature. In this instance, it will be used to measure whether or not a person has a fever.

Although, a number of American companies are in on the act – Infrared Cameras, Inc. and Omnisense – Chinese companies are also making lots of money on the new rollout, including a company ironically from Wuhan, Wuhan Guide Infrared Co. In fact, the company is making so many that the Chinese military is having to wait for its orders for other products that the company makes.

And if Americans think their “representatives” are going to do anything to stop the rollout, they’re wrong. As TravelPulse writes,

On Friday, U.S. Senate Committee on Commerce, Science, and Transportation Ranking Member Maria Cantwell of Washington and Senator Rick Scott of Florida introduced a proposal for bipartisan legislation that would require the Transportation Security Administration (TSA) to implement temperature screenings at existing airport checkpoints in order to enhance the safety of passenger air travel amid the COVID-19 pandemic.

The Cantwell-Scott ‘Fly Safe and Healthy Act of 2020’ (S. 4623) would task the TSA with ultimately deploying a uniform temperature-check program across the nation’s airports; but, first, to thoroughly test the technology in various scenarios as part of a pilot program prior to the final rollout.

Senators like Rick Scott have been advocating heavily for the technology. His argument, like the argument of others, is that the tech is needed to help our economy rebound. Of course, the economic crisis in the United States was not caused by a lack of thermal imaging but by government itself, specifically people like Rick Scott. But that’s another story for another time….

It won’t stop with taking your temperature.

Of course, we all know the surveillance isn’t going to stop merely at temperature checks. Back in 2011, an article was published by the BBC entitled, “New Emotion Detector Can See When We’re Lying.” The system, like the temp checkers, is one of interlocked video cameras connected to a “high-resolution thermal imaging sensor and a suite of algorithms.”

The idea is that, since humans give away their emotions through a variety of unconscious means, the ability to read facial cues enables security to interpret the motives of “potential terrorists.” Of course, the label of “potential terrorist” is one that has been applied to virtually every citizen within and without of a western nations’ borders. Nevertheless, in order to measure “emotions,” the system uses eye movements, dilated pupils, biting, nose wrinkling, pressing lips together, heavy breathing, swallowing, blinking, and other facial movements as well as swelling blood vessels around the eyes.

Keep in mind, this technology existed in 2011 and already took advantage of thermal imaging. We are not in uncharted territory here, we are merely witnessing the unfolding of an agenda that was planned long ago.

Privacy is a thing of the past and has been for a long time. We’ve warned about how frequently Americans are being surveilled, about Ring doorbells, about Amazon’s servers storing government databases to identify us, and about Smart appliances. We’ve talked about Chinese “mind-reading” technology and their social credit system. The pieces are in place – now they’re just perfecting what already exists.

What steps, if any, are you taking to avoid surveillance? Do you feel that the pandemic has been used to spring the trap that was already set for us? What are your thoughts on the high-tech facial recognition and thermal imaging devices in use practically everywhere? Let’s talk about it in the comments.