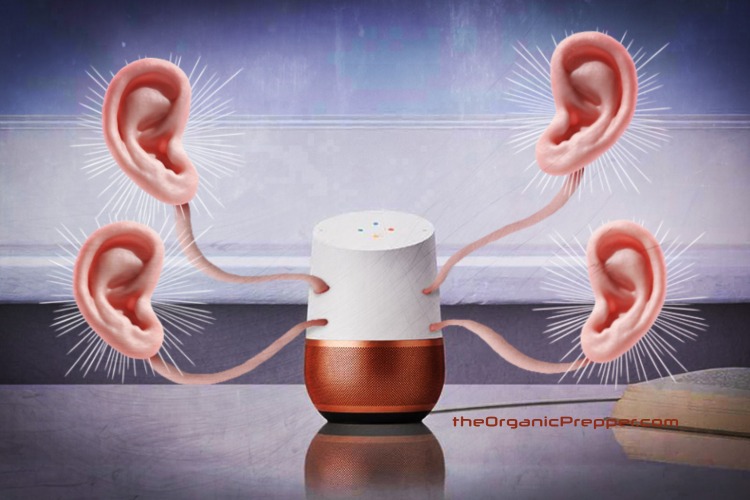 Remember all those conspiracy theorists and Luddites who told you they didn’t want Echo or Alexa devices in their home because those gadgets were spying on them? Well, they were right. That’s not even up for debate.

If you were one of those friends who mocked them and called them crazy, you were wrong. Just admit it.

If you are bewildered by what you just read, please, read on.

Nearly ten years ago, writers like Brandon Turbeville and others were warning that “smart technology” and the “internet of things” were being developed for surveillance and manipulation purposes. (Despite the companies’ claims of greater convenience.) We’ve been in a virtual dragnet for years.

Those devices and technologies are ubiquitous and are being used to soak up data, private and personal conversations, interactions, and even movement. All of this openly discussed in mainstream outlets. Lately, this website has reported on the Nest, your phone’s location tracker, and other “smart” technology. We’ve even talked about how we all have “surveillance scores.“

Take a look at WIRED’s article by Sidney Fussell, “Meet the Star Witness: Your Smart Speaker.” In this article, Fussell details a murder case in which an Amazon Echo device was presented as evidence.

In July 2019, police rushed to the home of 32-year-old Silvia Galva. Galva’s friend, also in the home, called 911, claiming she overheard a violent argument between Galva and her boyfriend, 43-year-old Adam Crespo. The two lived together in Hallandale Beach, Florida, about 20 miles from Miami.

When officers arrived, Galva was dead, impaled through her chest by the 12-inch blade at the sharp end of a bedpost. Police believe Crespo tried to drag Galva from their bed. She held onto the bedpost to resist, but the sharp end snapped, somehow killing her. Police charged Crespo with second-degree murder. He pleaded not guilty and was released on $65,000 bail, awaiting trial. In the months since the arrest, Crespo’s lawyer has presented a surprising piece of evidence in his defense: recordings from a pair of Amazon Echo speakers.

“I had a lot of interviews where people said, ‘Oh, are you aware that this could be the first time Alexa recordings are going to be used to convict somebody of murder?'” says Christopher O’Toole, Crespo’s lawyer. “And I actually thought of it the opposite way, that this could be the first time an Amazon Alexa recording is used to exonerate somebody and show that they’re innocent.”

When police and prosecutors collect smart home or speaker data, it’s typically used as evidence against suspects. The Hallandale Beach Police Department filed a subpoena for Crespo’s speakers, as they may have picked up audio of the argument Galva’s friend overheard.

The incident shows the growing role of smart home devices and wearables in police investigations.

In 2016, police in Bentonville, Arkansas, requested Amazon Echo data in connection with a man’s death, believed to be the first such request. Amazon initially tried to block the request, but later handed over the data. A murder charge against the defendant was later dropped, but the speaker, smart home, and wearable data has figured into multiple cases since then.

Requests for smart and wearable data has increased rapidly.

Earlier this month, Amazon said it had received more than 3,000 requests from police for user data in the first half of this year, and complied almost 2,000 times. That was a 72 percent increase in requests from the same period in 2016, when Amazon first disclosed the data, and a 24 percent jump in the past year alone.

Amazon doesn’t provide granular data on what police are seeking, but Douglas Orr, head of the criminal justice department at the University of North Georgia, says police now look for smart home data as routinely as data from smartphones. Data on a smartphone often points officers towards other devices, which they then probe as the investigation continues.

By amending a search warrant, police can “keep going to keep collecting data,” Orr says. “That usually leads to an Echo or at least some other device.”

As Orr explains, officers are getting more savvy about smart home devices, creating templates that simplify requesting data. Police departments often share these templates, he says, tailoring requests for the specifics of the case they’re investigating.

In their terms of service, most major apps and websites include a clause warning users that companies may hand over their data if requested by the government. Law enforcement agencies file subpoenas or search warrants for data, detailing to judges what evidence they expect to find on the devices and how it may serve the investigation. Amazon and Google both notify users of a request for data unless the order itself forbids it. Any number of entities can request user data, but the companies say they prioritize requests based on urgency.

“Things like Homeland Security, they’re going to take high priority,” explains Lee Whitfield, a forensic analyst. “Other law enforcement requests will come in under that. And then things like divorce cases or civil cases, they have a lower ranking.”

Forensic experts tell WIRED that information from the devices is valued because it can offer a timeline of a person’s activities, their location, if they’re alone, and can verify statements made during questioning.

Orr has studied the types of data police can pull from smart speakers like the Amazon Echo. “Voice clips are only the beginning,” he says. Speakers keep time-stamped logs of user activity. Police can examine these logs to get a sense of what someone was doing around the time of an alleged crime.

Fussell then provides another example of how these devices are used by law enforcement.

Consider a potential suspect who can’t prove where they were at 11 pm on a Thursday, because they live alone. Something as simple as ordering pizza through a speaker would show the time and location of the request and, if voice recognition is enabled, who made the request. “It might be benign information that someone was ordering a pizza, but it might also be an alibi for somebody,” Orr says.

Police increasingly rely on wearables and smart devices to verify the claims people make during an investigation. Sometimes, the tools can reveal a lie.

Heather Mahalik, a forensics instructor, recalls a Florida case in which a man killed his wife, then tried to impersonate her. The husband sent texts and Facebook messages from his wife’s phone in an attempt to blur the timeline of her disappearance. While the woman’s phone activity continued, her Apple Watch showed a sudden drop in heart rate activity that the husband claimed was due to a dead battery. Activity on the man’s phone synced perfectly with when he used the wife’s phone to post to Facebook. Her phone showed no activity except for when the husband picked it up to post, with timestamps matching his activity to the use of the wife’s phone.

“We were able to tell from his device that he would pick up the phone, take 18 steps, and it corresponded with the time he posted a Facebook post,” Mahalik says.

Connecting information from multiple devices is a common practice, analysts say. Information on one device can suggest evidence on another. This ability to string together discoveries leads to what another expert calls a phased approach to digital forensics.

“They ask for something, the investigation moves along, they find something else interesting, and then they request the next thing,” says Whitfield, the forensic analyst.

O’Toole says he intends to introduce the smart speaker recordings in his client’s favor. Via email, a spokesperson for Hallandale Beach Police confirmed the case was still active but did not provide further comment.

O’Toole says smart speaker recordings are part of several cases he’s working on, including a divorce in which a woman subpoenaed data from a smart speaker that may have picked up the sounds of her husband with another woman..

Whitfield says police are becoming more savvy about the information in the smart speakers’ activity logs. He recalls a case where police found drugs in a household with multiple residents. Officers identified a suspect after seizing data from a smart speaker. Its log not only listed recent queries related to drugs but identified who spoke them. Google and Amazon speakers let users create profiles so the devices recognize their individual voices. This information helped police identify the suspect.

“I just don’t see this going away,” Whitfield says. “I think this is going to be more and more prolific as time goes on.”

It will never go away.

Advertisement of these technological devices as a tool for convenience was a manipulative tactic to introduce technological devices for their real purpose – the tracking, monitoring, and recording of citizens so that no action – no matter how small – goes unnoticed. We are already living in a surveillance state and it’s only going to get worse.

Once begun, this bell cannot be unrung.

What are your thoughts on things you said in your own home being used against you by the police? Are you taking any steps to protect yourself from this type of data being collected? Share your thoughts in the comments. 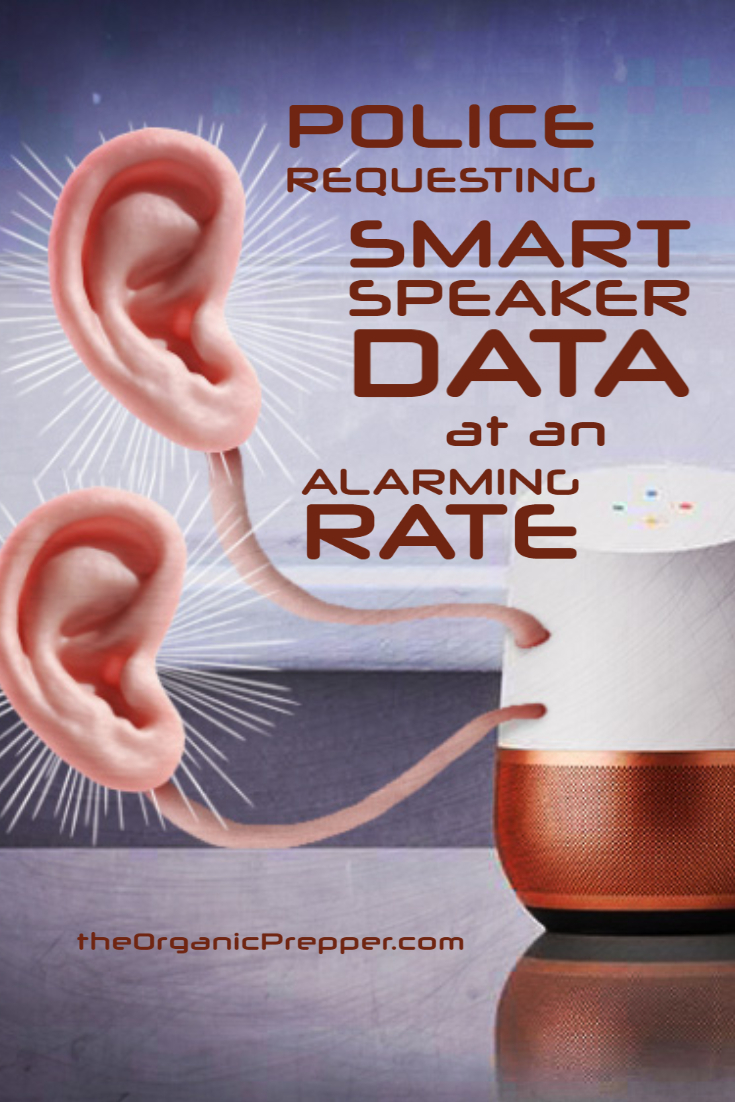