China Is Data Mining DIRECTLY FROM THE BRAINS of Workers 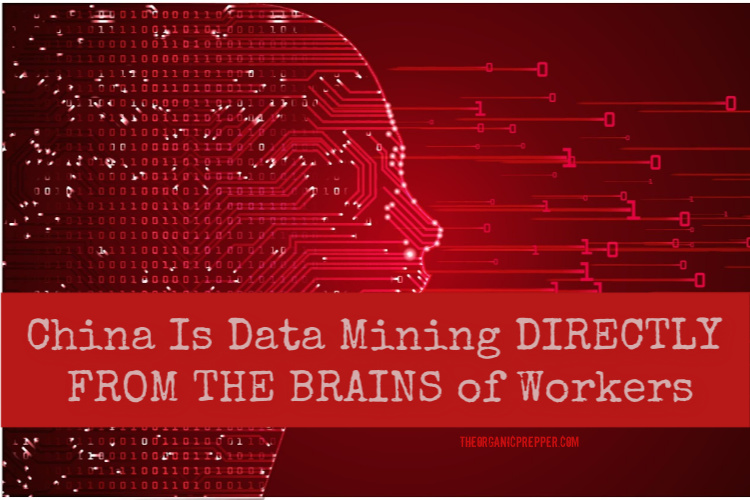 China is deploying emotional surveillance technology that mines data from the minds of its citizens. Essentially, they’re data mining by reading their brains.

The light-weight sensory helmets have been rolled out on an industrial scale. The mind data-mining and emotional surveillance programs are eerily similar to trends in the United States to monitor and probe the mental health of its citizens through facial recognition.

But China was taking data mining to the next level.

Around the same time, however, China quietly reported that its government is openly fishing data from workers’ minds: making a Facebook leak pale in comparison.

[…]the workers wear caps to monitor their brainwaves, data that management then uses to adjust the pace of production and redesign workflows, according to the company.

The company said it could increase the overall efficiency of the workers by manipulating the frequency and length of break times to reduce mental stress.

Hangzhou Zhongheng Electric is just one example of the large-scale application of brain surveillance devices to monitor people’s emotions and other mental activities in the workplace, according to scientists and companies involved in the government-backed projects.

The wireless sensors are concealed under a normal uniform hat and constantly monitor brain waves while sending the data back into main computers that use AI algorithms to detect any unpleasant emotional spikes such as “depression, anxiety or rage.”

In addition, a special camera watches their facial expressions and their body temperatures are monitored. Pressure sensors detect all shifts in body language.

Of course, it’s funded by the government.

Neuro Cap is a central government-funded brain surveillance project at Ningbo University where a lot of the research takes place. It’s been implemented in more than a dozen factories and businesses including train drivers working on the Beijing-Shanghai high-speed rail line using the technology from Deayea company in Shanghai.

The built-in sensors in the brim of the hats can sound an alarm if the rail driver starts to fall asleep.

The application of this emotional surveillance extends to hospitals and in the military which no one will comment on. Instead of using it on hospital employees, however, it is used to monitor patients in case of a “violent outburst.”

When the system issues a warning, the manager asks the worker to take a day off or move to a less critical post. Some jobs require high concentration. There is no room for a mistake.

Of course, she notes the initial fear and suspicion of employees but that after a while “they got used to the device. It looked and felt just like a safety helmet. They wore it all day at work.”

“They thought we could read their mind. This caused some discomfort and resistance in the beginning,” she said.

They probably had this strange idea that they could read their minds because they were literally reading their minds.

The plan is for the technology to be used as a “mental keyboard” where commands from the brains of the wearer are executed by thought.

It’s increasing profits, which means this will spread.

Right now, it is significantly increasing profits and giving China an edge on other markets.

The technology is also in use at in Hangzhou at State Grid Zhejiang Electric Power, where it has boosted company profits by about 2 billion yuan (US$315 million) since it was rolled out in 2014, according to Cheng Jingzhou, an official overseeing the company’s emotional surveillance programme.

“There is no doubt about its effect,” Cheng said.

Zhao Binjian, a manger of Ningbo Shenyang Logistics, said the company was using the devices mainly to train new employees. The brain sensors were integrated in virtual reality headsets to simulate different scenarios in the work environment.

“It has significantly reduced the number of mistakes made by our workers,” Zhao said, because of “improved understanding” between the employees and company.

The company estimated the technology had helped it increase revenue by 140 million yuan in the past two years.

While the tech has raised concerns of abuse and calls for regulations, “China has applied it on an unprecedented scale in factories, public transport, state-owned companies, and the military to increase the competitiveness of its manufacturing industry and to maintain social stability,” the report says.

Variations of this tech are here in the United States or coming soon. As Zerohedge points out, Google already has patents with ready-made plans for surveillance in the new smart home, including your children’s bedrooms.

There are already apps intended for the U.S. that monitor mental health behavior in patients.

China is also using their facial recognition to tag jaywalkers so it doesn’t stand to reason that they have spent untold amounts on this technology for the enjoyment of their nation’s individuals.

Facial recognition cameras were recently rolled out in a New York school district. The company making the tech is offering it to a county for free because it’s for the safety of “the children.”

With only one or two cautions, a Psychology Today report extols the virtues of the future of mental health facial tracking, or rather, AI truth tracking and calls it “the end of hiding” as though privacy itself holds a criminal intent:

We’ve always known that faces convey information to others, but now ever-present electronic eyes can watch us with untiring attention and with the training to spot our most fleeting micro-expressions.

As the machines’ learning advances, step by step, we must make or accept tradeoffs, explicitly or implicitly. That’s why it’s worth looking into those electronic eyes, to understand their applications and their social risks and benefits.

Qiao Zhian, professor of management psychology at Beijing Normal University, acknowledges that the Chinese brain-mining technology would give a competitive edge to those who deploy it. However, he seems to be the only one quoted in the report who pointed out the obvious Orwellian 1984 vibe going.

Qiao said that the technology could also be abused by companies “to control minds and infringe privacy,” mirroring Big Brother “thought police” – the dreadful law enforcement in 1984 who interrogated and punished people for displaying beliefs out of line with the upper echelon.

“There is no law or regulation to limit the use of this kind of equipment in China. The employer may have a strong incentive to use the technology for higher profit, and the employees are usually in too weak a position to say no,” he said.

The selling of Facebook data is bad enough. Brain surveillance can take privacy abuse to a whole new level.

He adds that there should be urgent legislation to protect workers’ interests and bargaining power. He urges lawmakers to”act now to limit the use of emotion surveillance.” With one last haunting thought, Qiao warned:

The human mind should not be exploited for profit.

Mining data from our minds won’t benefit US personally.

But more than violating the most inner privacy of all to maximize production, our thoughts and feelings shouldn’t be outsourced to AI monitors or read back to a lustful employer. What kind of environment makes it more lucrative to spend millions on tech to monitor thoughts and feelings when a truly free environment would allow individuals to voice any problems and work together to solve them?

Obviously, the Chinese government didn’t go through all that trouble to increase the life benefits for employees there.

What do you think of this emotional surveillance trend? Will you don the sensor helmet if your boss rolls them out? Sound off below!