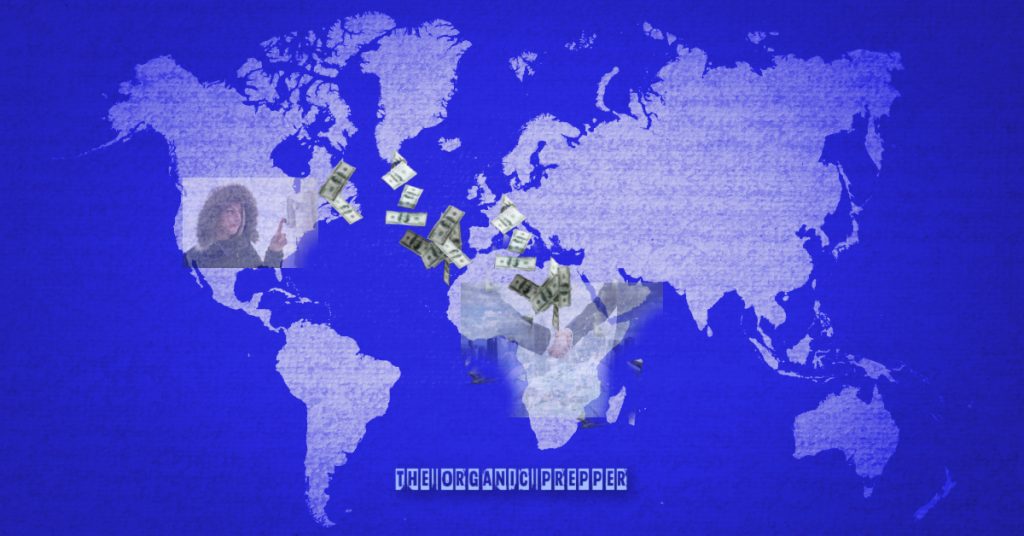 More people than ever are facing dire circumstances, and we’re just getting started with this economic disaster. And what is our government doing?

Why, they’re giving our money away.

To other countries, no less.

But the plight of our own countrymen seems to be less important than those in other countries affected by climate change. The United States has just agreed to pay up to a billion dollars to poor countries for “climate reparations.” As per an opinion piece in the Wall Street Journal:

The use of climate policy to soak Americans keeps getting worse, and the United Nation’s climate conference in Egypt ended this weekend with agreement on a new fund to pay reparations to poor countries. Welcome to the latest climate shakedown.

The 2015 Paris accord suggested rich countries compensate poor countries for climate damage—the rationale being that industrialization has increased temperatures and led to natural disasters. Poor countries finally forced discussion of a formal mechanism to pay climate reparations onto this year’s U.N. conference agenda.

…on Thursday Europe abandoned the U.S. by proposing a deal, and Mr. Kerry rolled over.

Wealthy countries will now set up a fund to cover climate damage for the least developed countries—i.e., not China or middle-income nations. This will be financed from “a broad donor base” and “mosaic of solutions,” such as international development banks and taxes on aviation, shipping and fossil fuels.

Some reports suggest that the US will be on the hook for up to a billion dollars. In October, it was reported that the total amount due would be $4.3 trillion.

That’s the sum the US and other major carbon polluters will face at the COP27 climate summit in Egypt next month.

Well, other polluters except for China.

China is not contributing jack sh*t. It’s essential to note that out of all the polluters in the world, China is the worst offender, creating 30% of the world’s carbon emissions.

Yet, they’re exempt from this outrageous bill. Not one thin dime shall they pay. I’m not a fan of China’s dystopian policies and government, but at least they aren’t causing shortages and suffering in their own country in order to virtue signal how green they are.

In the end, it’s just the rich getting richer and the poor getting poorer. Says the WSJ:

Countries might also shake down U.S. fossil-fuel producers in their own courts. Climate reparations will merely serve as another form of global income redistribution. The Biden Administration’s surrender shows again that the religion of climate change is progressive penance for the sin of being prosperous.

In doing this, they ignore the plight of everyday Americans who can’t afford to run their heat or keep their homes.

We’ve repeatedly discussed the effects our current economic crisis is having on Americans. We talked about how they’re skipping meals and how they can’t afford medical care. We’ve been warning for years that they are struggling to meet their most basic needs. We live in a nation that destroyed itself during the Covid pandemic and has left its people hanging out to dry, with no jobs, no money, and no hope.

This isn’t some abstract concept about the planet.

This is real. And it’s happening to folks in our own communities.

Read these personal statements about how the economy is crushing Americans.

Here’s how the economy is affecting housing.

Sheba Everett is a single mother living in Durham, North Carolina, an area that is facing massive increases in the cost of living due to new companies coming to the region. Lower-income people are rapidly being displaced. She works full-time as a teacher with multiple side gigs to keep a roof over the heads of herself and her daughters. They were making ends meet until she got an eviction notice. A local newspaper shared her story:

The September eviction letter caught them by surprise, she said, even though all the annual leases were converted in the last two years to month-to-month leases. Everett asked about it in March when her lease changed and said she was told it was to help tenants struggling in the post-pandemic economy. Now, everyone is in dire straits, trying to find affordable housing when the only units available are condemned or too small, she said.

“It will be three years in March (since they moved into their current home), so the prices were still somewhat reasonable (before), and so I tried to find something similar, and it’s just like double the price, so there’s just no way I can survive or stay in Durham or any of that.

I’ve reached out to the housing agencies, but since we’re in a crisis right now — one of the worst that we’ve seen in our lifetime — they’re backed up. I am one of many numbers. I’ve gotten on a couple of waiting lists, and even those things, they definitely will keep a roof over our head, but it’s not anything that actually fits my family’s needs. It’ll keep us from being homeless.

I’ll work five jobs and pay for a super-expensive place where I literally can barely breathe, but I can’t uproot my children from their home without giving it my all, because like I said, it’s way more than just a house.

As a single mom myself, I know exactly how difficult it is to have to uproot your children in the midst of financial problems. It’s heartbreaking to see them suffer because of money. When you don’t have much money, a home is the one thing that you strive to provide, no matter what.  Losing that security is almost unbearable.

(Disaster comes in many forms. Check out our free QUICKSTART Guide to better understand the four levels it can reach.)

Here’s how the economy is affecting utilities.

The high cost of energy is causing exorbitant heat bills as we move into winter.

As the first frigid weather of autumn chills the Northeast, many people are faced with a tough decision: deal with the surging costs of heating their homes or live without it.

Home heating prices are skyrocketing yet again this winter, up 18% nationwide on top of last year’s 17% spike, according to the National Energy Assistance Directors Association (NEADA).

Charmaine Johnson works in the call center at Philadelphia’s Heater Hotline, part of a non-profit that assists low-income families with their heating systems and bills. Johnson, 63, can relate to the concerns she’s hearing all day. She, too, is struggling to afford her heating bills…

…Johnson says she doesn’t qualify for government assistance with her heating bills. As inflation also pushes up her food budget and other expenses, she is bundling up and keeping the heat turned down, hoping to stretch that oil for as long as possible.

The elderly and children are the most likely to suffer when folks can’t afford to turn their heat to a reasonable level. Some senior citizens living on fixed incomes are talking about keeping their thermostats at a nippy 50-55 degrees.

It doesn’t matter how you heat, this year, you are going to pay more. The Energy Information Administration (EIA) predicts that:

…heating a home with natural gas will cost an extra 25% this winter, and heating with electric will run 11% higher. The steepest hike will be on heating oil, which is expected to be 45% more expensive than last winter, squeezing roughly 5 million households, mostly in the Northeast.

Many of our most vulnerable citizens are facing a long cold winter.

But by all means, let’s stash a billion dollars or so in a fund for other countries.

Imagine what we could do with a billion dollars here at home. Imagine the people who could be fed, housed, and sheltered. Sure, it wouldn’t solve all of our problems. It wouldn’t undo the damage done to our economy by disastrous lockdown policies.

But wouldn’t it be better to help the folks at home before pledging tons of money to others?

Is it just me? Do you feel that this is a terrible use of American money, or do you think it’s a good call? If you could decide where to distribute a billion dollars as a government official, where would you direct it? And how the heck does China get off scot-free?

Let’s discuss it in the comments section.