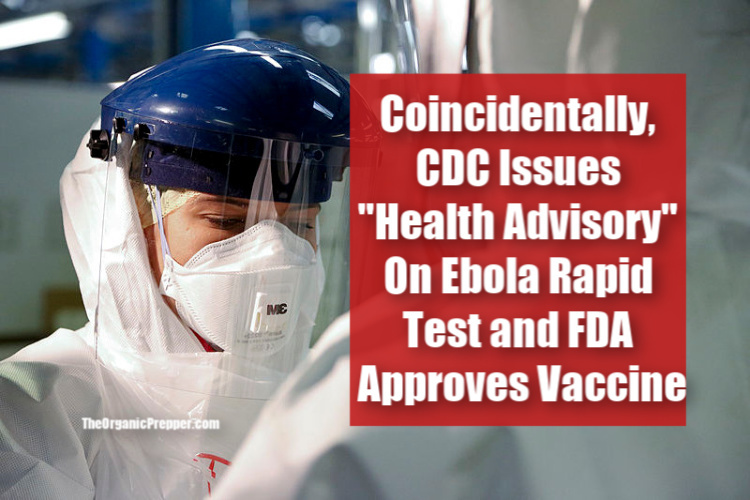 In an interesting coincidence, the CDC has issued an advisory on the use of an Ebola rapid diagnostic test only 3 days before the announcement of a new FDA-approved Ebola vaccine with a “100% effectiveness” rate.

The CDC has issued a health advisory for the use of a newly approved rapid diagnostic test for Ebola.

Healthcare providers interested in testing for Ebola virus in ill returning travelers should isolate the patient and contact their state or local public health authorities. An assessment of epidemiologic risk factors for Ebola and clinical presentation and history should be made as quickly as possible to ensure patient care is not compromised. CDC is available to provide consultation, technical assistance, and confirmatory testing as necessary. (source)

The advisory stresses that this is only a preliminary test and may not be accurate, with these caveats.:

You may recall that the last time Ebola reached the United States, Patient Zero had been turned away from the hospital without a test for Ebola. His nurses became infected and one even unknowingly went on a cross-country flight while infected.

Protocols during the 2014 scare were slipshod, with people in NYC being told not to worry when a local doctor was positively diagnosed with the illness and eleven people with “potential exposure” to Ebola being sent to hotels. It was only good luck that prevented the 2014 outbreak from becoming more widespread.

Part of the reason for the rapid testing is that several other potentially travel-related diseases share similar preliminary symptoms, particularly malaria, dengue fever, influenza, and typhoid.

The rapid test was developed by OraSure Technologies. It was created for use with patients who display symptoms and epidemiological risk factors of Ebola as well as recently deceased individuals who are suspected to have died from Ebola.

Only 3 days after the health advisory was issued, the FDA and USDA announced that the vaccine “Everbo” had been approved.

“Ebola virus disease is a rare but severe and often deadly disease that knows no borders. Vaccination is essential to help prevent outbreaks and to stop the Ebola virus from spreading when outbreaks do occur,” said Peter Marks, M.D., Ph.D., director of the FDA’s Center for Biologics Evaluation and Research. “The FDA’s approval of Ervebo is a major advance in helping to protect against the Zaire ebolavirus as well as advancing U.S. government preparedness efforts. The research approach used to study the effectiveness and safety of this vaccine was precedent-setting during a public health emergency and may help create a model for future studies under similar circumstances. The FDA is committed to continuing our work across the U.S. government and with our international partners to prevent future Ebola outbreaks and mitigate the current outbreak in the DRC, reflecting our nation’s commitment to preparing for and responding to biological threats, like Ebola.”  (source)

While the vaccine was just recently approved by the FDA, it’s been “studied” in Africa for several years now. The World Health Organization has been using the vaccine on an “investigational” basis in the Congo for more than a year now. The vaccine was also part of a ” study conducted in Guinea during the 2014-2016 outbreak.” As well, other studies were conducted.

This vaccine was originally created in Canada by the Public Health Agency of Canada’s National Microbiology Laboratory. The product was then licensed to NewLink Genetics Corp.  NewLink sold the rights to Merck in 2014. Bloomberg cites the FDA, stating that the vaccine was found to be “100% effective when given at least 10 days in advance of potential exposure.”

Some of the human testing for the vaccine took place in Fort Detrick.

Like the four drugs tested for Ebola treatment, units on Fort Detrick were part of the vaccine’s early development.

The Joint Project Manager for Chemical, Biological, Radiological and Nuclear Medical (JPM-CBRN) helped provide a test that allowed Merck to test human and non-human primate samples. Comparing the two samples is part of the FDA’s requirements for licensure, according to a press release from JPM-CBRN. (source)

You may recall that Fort Detrick recently had their labs shut down by the CDC after two separate infections showed sloppy handling of germs and viruses, stoking fears something could get out through improperly treated wastewater.

Merck is ramping up production of the vaccine and hopes to make it more widely available in the third quarter of 2020.

A quick refresher on Ebola

Here’s a quick refresher on Ebola courtesy of the World Health Organization. Here’s how it spreads:

Ebola…spreads through human-to-human transmission via direct contact (through broken skin or mucous membranes) with:

Health-care workers have frequently been infected while treating patients with suspected or confirmed EVD. This occurs through close contact with patients when infection control precautions are not strictly practiced.

Burial ceremonies that involve direct contact with the body of the deceased can also contribute in the transmission of Ebola.

People remain infectious as long as their blood contains the virus. (source)

The incubation period is between 2 and 21 days. The WHO says that a person infected with Ebola is not contagious until they have begun to display symptoms.

Symptoms of EVD can be sudden and include:

This is followed by:

What does this all mean?

It could mean absolutely nothing. It could just be medical advances that seem to be coinciding.

Of course, the last time the CDC began to talk about Ebola making it to the United States, it did. And the federal government recently hired “ebola airport screeners.”

While I certainly wouldn’t advise panic, you might want to check your preps, particularly personal protection gear. The last time around, it became nearly impossible to get masks and Tyvek suits and if you could get them, you paid a premium. Social distancing is the number one way to protect yourself and your family against a virus like Ebola. Here’s more information about prepping for Ebola. This book has an entire section devoted to Ebola and should have a place on every prepper’s shelf. Interestingly, the book is out of stock in paperback, so I’d pick up the Kindle version and pre-order the physical copy if you don’t already have it.

Remember, by the time we hear about something, the government agencies have known about it for a while and kept it to themselves so as not to cause a panic. It could be wise to get ahead of the curve with any preparations you may need to make.

While these recent developments must be purely coincidental, and I’m not suggesting that a widespread outbreak is imminent in the United States, I suggest you pay attention to the patterns that are beginning to emerge.