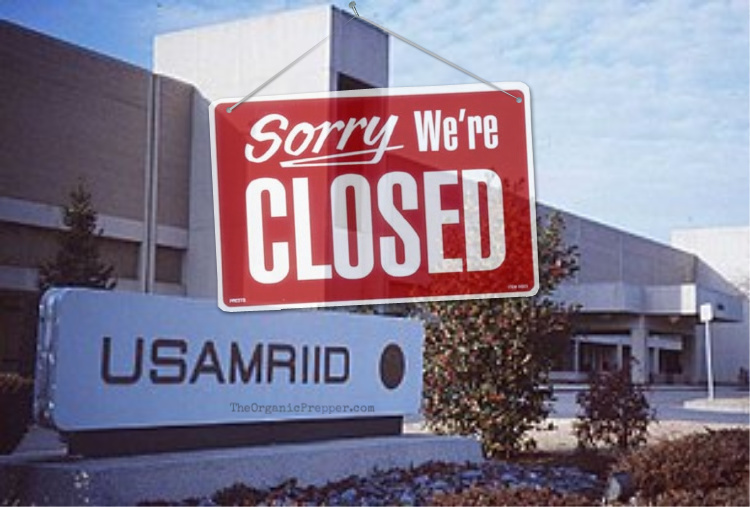 We may not have to wait for a traveler from the Democratic Republic of Congo to visit the United States for an Ebola outbreak. It just might be brought to us by our own military along with the plague and other horrifying germs.

The laboratory at Fort Detrick, the  U.S. Army Medical Research Institute of Infectious Diseases, has been sent a cease-and-desist order by the Center for Disease Control and Prevention after a second inspection showed sloppy handling of deadly germs and viruses.

The CDC inspected the military research institute in June and inspectors found several areas of concern in standard operating procedures, which are in place to protect workers in biosafety level 3 and 4 laboratories, spokeswoman Caree Vander Linden confirmed in an email Friday.

The CDC sent a cease and desist order in July.

After USAMRIID received the order from the CDC, its registration with the Federal Select Agent Program, which oversees disease-causing material use and possession, was suspended. That suspension effectively halted all biological select agents and toxin research at USAMRIID, Vander Linden said in her email. (source)

At this time “no infectious pathogens, or disease-causing material, have been found outside authorized areas.” The New York Times reports that the CDC could not provide more specific details due to “national security reasons.”

What was USMRIID doing wrong?

The laboratory, which is located in Frederick, Maryland, studies different deadly bugs for biological warfare purposes. They have failed inspection specifically by the Federal Select Agent Program, which oversees the possession, use and transfer of biological select agents and toxins that could potentially pose a severe threat to public, animal or plant health.

CDC spokeswoman Kathryn Harben wrote in an email that the Federal Select Agent Program doesn’t comment directly on whether a program is registered or what specific enforcement actions are taken.

“As situations warrant, [Federal Select Agent Program] will take whatever appropriate action is necessary to resolve any departures from regulatory compliance in order to help ensure the safety and security of work with select agents and toxins,” Harben said in the email.

The suspension was due to multiple causes, including failure to follow local procedures and a lack of periodic recertification training for workers in the biocontainment laboratories, according to Vander Linden. The wastewater decontamination system also failed to meet standards set by the Federal Select Agent Program, Vander Linden said in a follow-up email.

The suspension was due to multiple causes, including failure to follow local procedures and a lack of periodic recertification training for workers in the biocontainment laboratories, according to Vander Linden. The wastewater decontamination system also failed to meet standards set by the Federal Select Agent Program, Vander Linden said in a follow-up email.

“To maximize the safety of our employees, there are multiple layers of protective equipment and validated processes,” she said.

Vander Linden could not say when the laboratory would be able to continue research.

“USAMRIID will return to fully operational status upon meeting benchmark requirements for biosafety,” she said in an email. “We will resume operations when the Army and the CDC are satisfied that USAMRIID can safely and consistently meet all standards.” (source)

The problems started with a flood in 2018.

It’s important to note that the USAMRIID facility was flooded in May of 2018.

In May 2018, storms caused a flood at the Fort Detrick facility, seriously damaging its 10-year-old steam sterilization plant, which provides high-tech wastewater management. The plant was offline for months, and the incident resulted in upgraded biosafety procedures. But as Vander Linden told the Frederick News-Post, the new protocols significantly increased “operational complexity” at the facility. The CDC inspection found that the “new procedures were not being followed consistently,” along with the discovery of “mechanical problems with the chemical-based decontamination system, as well as leaks [inside the lab]. (source)

A lab with all sorts of deadly viruses flooded, and most of us never heard a single thing about it. And ever since, the wastewater leaving the lab may or may not have been properly treated by steam sterilization.

What is the lab at Fort Detrick studying?

So they study biological warfare from both an offensive and defensive standpoint.

Of the pathogens, Ebola, bacteria Yersinia pestis (plague), and bacterium Francisella tularensis (tularemia) are on the list of the Health and Human Services select agents and toxins. The three are considered Tier 1 agents, which pose a severe public health and safety threat.

Venezuelan equine encephalitis also falls under the Federal Select Agent Program, according to the Code of Federal Regulations. (source)

Nifty. Just imagine that stuff getting out with the facility’s wastewater.

There’s no word on when operations will resume.

I imagine the good people of Frederick, Maryland aren’t too thrilled to be in the same neighborhood as a laboratory which is sloppily studying all these deadly bugs. This is reminiscent of the rumors about Plum Island and ticks weaponized with Lyme disease, which lawmakers have recently been investigating. And it’s certainly no wonder the people of Manhattan, Kansas didn’t want the research facility being built there.

Every time I see a story like this it reminds me of books like The Stand and movies like Outbreak.  All it takes is one careless laboratory accident – you know, like not sanitizing the wastewater before it leaves the facility – to start something that simply cannot be contained. It looks like all those folks prepping for a deadly pandemic may not be so crazy after all.