According to the Doomsday Clock, the End Is Near

The hypothetical “Doomsday Clock” is closer to midnight – the hour of doom – than it has been since 1953, the year that the US and the USSR both tested hydrogen bombs at the beginning of the global nuclear arms race.

The Bulletin of the Atomic Scientists (BAS) announced on Tuesday that the time on the clock was now two minutes to midnight. The BAS is a group of science and policy experts who assess human advancement…and risk…say that we’re getting alarmingly close to the Zero Hour. Their statement said:

To: Leaders and citizens of the worldRe: Two minutes to midnightDate: January 25, 2018

In 2017, world leaders failed to respond effectively to the looming threats of nuclear war and climate change, making the world security situation more dangerous than it was a year ago—and as dangerous as it has been since World War II.

The greatest risks last year arose in the nuclear realm. North Korea’s nuclear weapons program made remarkable progress in 2017, increasing risks to North Korea itself, other countries in the region, and the United States.Hyperbolic rhetoric and provocative actions by both sides have increased the possibility of nuclear war by accident or miscalculation.

But the dangers brewing on the Korean Peninsula were not the only nuclear risks evident in 2017: The United States and Russia remained at odds, continuing military exercises along the borders of NATO, undermining the Intermediate-Range Nuclear Forces Treaty (INF), upgrading their nuclear arsenals, and eschewing arms control negotiations.

In the Asia-Pacific region, tensions over the South China Sea have increased, with relations between the United States and China insufficient to re-establish a stable security situation.

In South Asia, Pakistan and India have continued to build ever-larger arsenals of nuclear weapons.

And in the Middle East, uncertainty about continued US support for the landmark Iranian nuclear deal adds to a bleak overall picture.

To call the world nuclear situation dire is to understate the danger—and its immediacy. (source)

The statement goes on to discuss climate change and technological campaigns.

But the change of the clock goes even deeper.

It is not any one of those factors, but a combination of all of them — and the weakening of public faith in knowledgeable expert voices — that prompted the change to the clock, Lawrence Krauss, chair of the BAS Board of Sponsors and director of the Origins Project at Arizona State University, told reporters.

“The danger of nuclear conflagration is not the only reason the clock has been moved forward, as my colleagues have described. This danger looms at a time when there’s been a loss of trust in political institutions, in the media, in science, and in facts themselves, all of which exacerbate the difficulty in dealing with the real problems the world faces, and which threaten to undermine the ability of governments to effectively deal with these problems,” Krauss said. (source)

Here’s a timeline of the Doomsday Clock and an illustration. 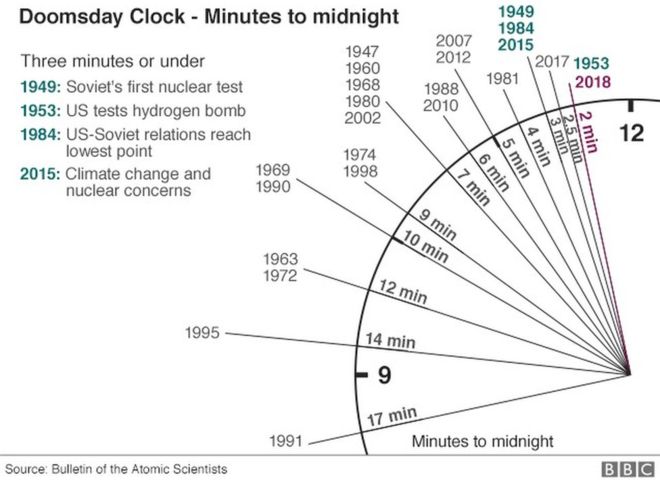 This video has more information about the Doomsday Clock. (The video is from last year but gives a good rundown of the history of the clock.)

The world is on an alarming trajectory.

While you may not agree that all the threats are actually legitimate, it’s difficult to deny an ugly trend in the world today.

Honestly, is the advent of Doomsday really that far-fetched?

Preppers have been saying this for ages.

Of course, none of us actually WANT to be right. But many are feeling the urge to prepare even more strongly of late as we watch the disturbing headlines. (Go here to learn more if you’re new to preparedness.)

What would you add to the list of doomsday concerns?

(Thank you to Guy for the tip!)