Campylobacter: The Foodborne Illness You Never Heard Of (And Hope You’ll Never Get) 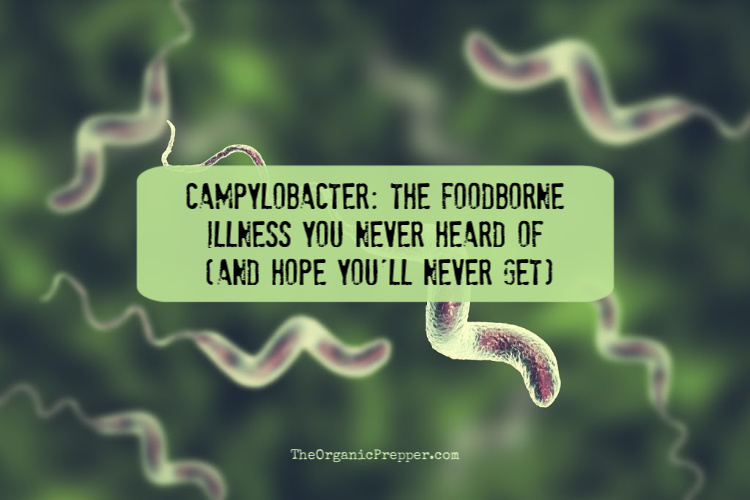 In our ongoing series on foodborne illnesses, we continue with the third most common – Campylobacter. This infection isn’t as heard of as the others, primarily because nowadays, in first world countries. we cook or heat the food enough to kill it, and it isn’t contagious.

The most commonly contaminated foods are raw poultry, fresh produce, and unpasteurized milk. It is a very fragile bacteria, and yet it’s considered to be one of the most common causes of diarrheal illness in the United States, and the most common bacterial cause of human gastroenteritis in the world, according to the World Health Organization.

Sometimes people infected with Campylobacter have symptoms, sometimes they don’t.

Campylobacter has symptoms, of course, but it’s important to note that many who are infected never display symptoms at all and therefore don’t feel/get sick. Fortunately, campylobacter is rarely transmitted from person to person but rather received from raw poultry, eggs, unpasteurized milk, water tainted with the bacteria, and crops irrigated with the tainted water.

The symptoms of Campylobacter infection are usually diarrhea (sometimes bloody), a fever, and abdominal cramps, and can be accompanied by nausea and vomiting. As mentioned, some people exhibit no symptoms at all. However, for people with weakened immune systems, or people receiving some types of chemotherapy, Campylobacter can spread to the bloodstream and cause a life-threatening infection. For such a quiet bacteria, it can and sometimes does, cause a big deal.

How is Campylobacter transmitted?

But most Campylobacter infections are picked up by eating raw or undercooked poultry, or from contamination of other foods by these items. For example, if a cutting board is used to cut up raw chicken, then isn’t washed before using it to slice up fruits or salad ingredients, a person can get infected.

A person can also get the infection from the feces of a dog or cat by not washing their hands well enough after cleaning litter boxes, but it does not typically spread from one person to another. There is, however, a very rare chance that a person can receive a Campylobacter infection from contaminated blood through a transfusion.

Here’s how Campylobacter infections are diagnosed and treated.

Once more we see symptoms that are quite similar to other illnesses, so how do we know if we have a Campylobacter infection; how does our doctor know? Once it’s ruled out that there’s been no ingestion of raw poultry, unpasteurized milk, or a possible drink of water from a place that’s not recommended, the doctor can perform some tests to see if there’s an infection. Those tests will most likely consist of a Complete Blood Count (CBC) with differential (which, for us laymen just means more details), and then the dreaded stool sample in order to test for white blood cells and to do a culture. Again, though, just like with salmonella, the infected person will most likely be feeling much better and free of the infection long before the culture comes back.

The treatment for Campylobacter infections is plenty of clear liquids, and, unless the person has diabetes, those liquids should contain both salt and sugar if possible. Gatorade might be a good example (just not red Gatorade). With diabetes, there should obviously be no sugar. It’s also recommended that a person drink at least 1 cup of liquid each time they have a bowel movement and that as they get to feeling better, they begin eating very small meals.

Most people feel better in a little over a week (that still seems like a long time to me!). Those who have a compromised immune system may have a rougher time of things, will most definitely need to see a doctor, and may require antibiotics. Thus, once more we face antibiotic resistance.

Infection can be resistant to antibiotics and can have complications.

Since 1986, fluoroquinolones have been approved for use to treat infections in people, and they worked well. Ciprofloxacin, a second-generation fluoroquinolone antibiotic, is used to treat many kinds of infections (including those caused by Campylobacter). Fluoroquinolones are broad-spectrum antibiotics, meaning they kill gram-positive and gram-negative bacteria, or, just about any bacteria there is. So, in 1995 and 1996, the FDA approved fluoroquinolones for use in poultry flocks to control certain infections and at first found no issues with antibiotic resistance. Then in 1997, when the CDC began Campylobacter surveillance, ciprofloxacin resistance had increased and continued to rise from 17% in 1997–1999 to 25% in 2012–2014. It has continued to increase ever since, despite the FDA’s refusal to approve its subsequent use.

How can you prevent infection with Campylobacter?

Knowing all that, what is the best way for us to prevent Campylobacter infections in the future? Wash, wash, wash our hands, then cook whatever can be cooked, including poultry, even the ones in our back yards, raw eggs, and only drink pasteurized milk. If in doubt, boil your water. Campylobacter can also be killed by bleach on surfaces. Interestingly enough, it thrives in cold moist environments that are as cold as 39°F/4°C, and freezing does not eliminate it. The best way to handle veggies is to wash well and cook well if possible. For raw fruits and vegetables, wash as well as possible before eating.

For us as preppers, as fragile as it appears to be in comparison to other bacteria, Campylobacter doesn’t seem like it will be a large issue in a disaster or apocalyptic environment as long as we can keep our hands and foods/food areas clean. Lifestraw water filter removes Campylobacter from the water we drink, but I could not find direct information that says the Sawyer water filter does. If anyone else finds that information, please post here for all to see. Otherwise, it wouldn’t hurt to boil our water anyway, and simply remember to cook our food well, then wash, wash, wash again!

Are there things you do to avoid infection with Campylobacter and other infectious agents? Please share your thoughts and tips in the comments.

Vomiting, Diarrhea, and Nausea, Oh My! Everything You Need to Know About Norovirus

Stomach Cramps, Diarrhea, and Fever: Could Salmonella Be the Culprit?

Here’s Why There Are SO MANY Food Recalls Lately