WHO’s 2050 Prediction: 10 Million People Could Die from Mutated Superbugs And We’ll Have No Drugs to Fight Them 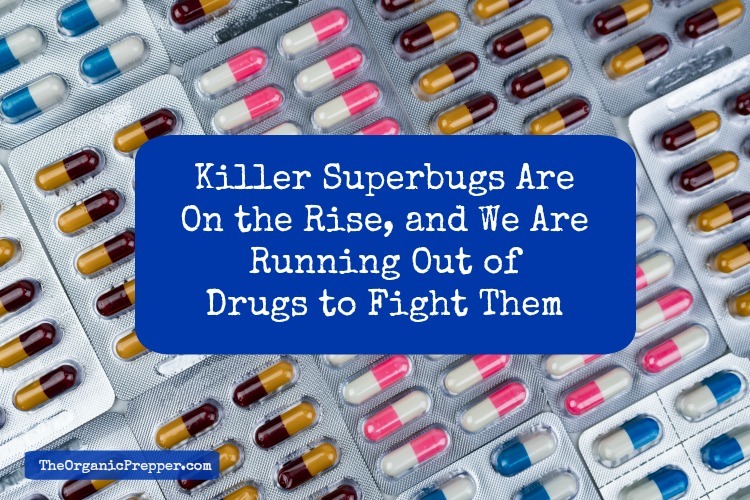 The discovery and widespread use of antibiotics many decades ago have saved millions of lives. Infections that were once a death sentence were easily treated with the medications. Unfortunately, many antibiotics are now becoming ineffective because bacteria have become resistant to the drugs.

We have overused antibiotics with reckless abandon and are now beginning to see the consequences. Some bacteria have mutated into “superbugs”.

We’ve used antibiotics so freely, some bacteria have mutated into so-called “superbugs.” They’ve become resistant to the very drugs designed to kill them. A study commissioned by the British government estimates that by 2050, 10 million people worldwide could die each year from antibiotic-resistant bacteria. That’s more than currently die from cancer. (source)

Infections by drug-resistant microbes may eventually be the leading cause of death.

The World Health Organization predicts that worldwide death rates from drug-resistant microbes will climb from the current 700,000 per year to 10 million by 2050. At that point, they will have surpassed cancer, heart disease, and diabetes to become the main cause of death in the human race.

Antibiotic resistance is one of the biggest health threats of our time, according to the Centers for Disease Control and Prevention (CDC):

Antibiotic resistance has the potential to affect people at any stage of life, as well as the healthcare, veterinary, and agriculture industries, making it one of the world’s most urgent public health problems.

Each year in the U.S., at least 2 million people are infected with antibiotic-resistant bacteria, and at least 23,000 people die as a result. (source)

Karen Hoffmann, who heads the Association for Professionals in Infection Control and Epidemiology, told Newsweek those figures may be on the low side:

“It’s probably a vast underestimate. We don’t have a good reporting system for multiresistant organisms, so we don’t really know.”

Studies suggest the cost to the U.S. health care system of treating patients with these resistant infections tops $3 billion a year.

Earlier this year, four patients became infected with an unusual version of E. coli at Columbia University’s Irving Medical Center in New York earlier this year. Because E. coli has developed resistance to several drugs, for some infected patients their last hope is the antibiotic colistin, a toxic substance with potential side effects that include kidney and brain damage. But, the Columbia E. coli had a mutation in a gene, MCR-1, that confers a terrifying attribute: imperviousness to colistin.

“We’re looking to the shelf for the next antibiotic, and there’s nothing there,” says Erica Shenoy, associate chief of the infection control unit at Massachusetts General Hospital, told Newsweek. “We’re facing the specter of patients with infections we can’t treat.”

E. coli isn’t the only bacterium that is becoming resistant to treatment.

Drug-resistant strains of Staphylococcus, Enterobacteriaceae, and Clostridium difficile have been steadily overcoming antibiotics. According to Newsweek, “one study found that the number of deaths due to resistant infections quintupled between 2007 and 2015.”

Other kinds of infections are also becoming resistant to treatment.

Just as antibiotic overuse has contributed to the rise of resistant bacteria, overuse of antimicrobial drugs is helping fungi becoming resistant.

Treatment-resistant versions of the fungus Candida auris have been occurring across the world. Last May, an elderly man became infected and doctors were not able to save him.

What happened after his death is horrifying:

The man at Mount Sinai died after 90 days in the hospital, but C. auris did not. Tests showed it was everywhere in his room, so invasive that the hospital needed special cleaning equipment and had to rip out some of the ceiling and floor tiles to eradicate it.

“Everything was positive — the walls, the bed, the doors, the curtains, the phones, the sink, the whiteboard, the poles, the pump,” said Dr. Scott Lorin, the hospital’s president. “The mattress, the bed rails, the canister holes, the window shades, the ceiling, everything in the room was positive.” (source)

Scientists are exploring alternatives to antibiotics.

In response to the growing number of bugs that are drug-resistant, scientists are learning to identify and isolate them in hopes of preventing large outbreaks. They are also making efforts to tighten up the use of antibiotics in an effort to slow the development of resistant strains, but many experts say it is too late, and that these actions will only buy us a little time:

At the moment, the oldest and weakest patients in hospitals are most affected, but the risks are spreading. “We’re seeing healthy young people with urinary tract and skin infections that we don’t have a pill for,” says Helen Boucher, an infectious disease specialist at Tufts Medical Center in Boston. “And we may not be able to perform organ transplants, and even routine surgeries like joint replacements. We should all be scared.”

Medical experts are pinning their hopes on entirely new strategies for dealing with infection. To find novel ways of killing bugs, they’re looking in exotic places—in viruses and fish slime and even on other planets. They’re using insights gained in genomics and other fields to come up with new technologies to kill bugs and keep them from spreading. And they are re-examining practices in hospitals and other spreading-grounds for bacteria, putting in place more holistic strategies for managing the bacteria in our bodies and in our hospitals and doctors’ offices.

The alternatives sound promising, but they are far off. It’s not clear that we can invent new weapons before the superbugs, like a zombie army at the gates, overwhelm our defenses.

“We need to make a huge investment in other approaches,” says Margaret Riley, a drug-resistance researcher at the University of Massachusetts. “And we need to make it 15 years ago.” (source)

There isn’t much incentive to develop new antibiotics, mainly because the development of one new antibiotic costs about $2 billion and takes about 10 years, and the likelihood of drug companies making a profit on such drugs is low.

“The point of having a new antibiotic would be to use it as infrequently as possible, for as short a time as possible,” Jonathan Zenilman, chief of the division of infectious diseases at Johns Hopkins Bayview Medical Center in Baltimore, told Newsweek. “Why would a pharma company want to develop a drug for a market like that?”

Researchers are looking into antibiotic alternatives, including the use of special soaps and infection control techniques, treatment with genetically-modified viruses called bacteriophages that are a natural enemy of bacteria, and other non-antibiotic treatments.

A recent 60 Minutes report explored the danger posed by superbugs, starting with the shocking case of David Ricci:

To read the transcript of this video, please click here: Could Antibiotic-Resistant “Superbugs” Become a Bigger Killer Than Cancer?

Do you think drug-resistant infections are going to become a serious public health threat? What measures do you take to avoid infection? Please share your thoughts in the comments.