Stomach Cramps, Diarrhea, and Fever: Could Salmonella Be the Culprit? 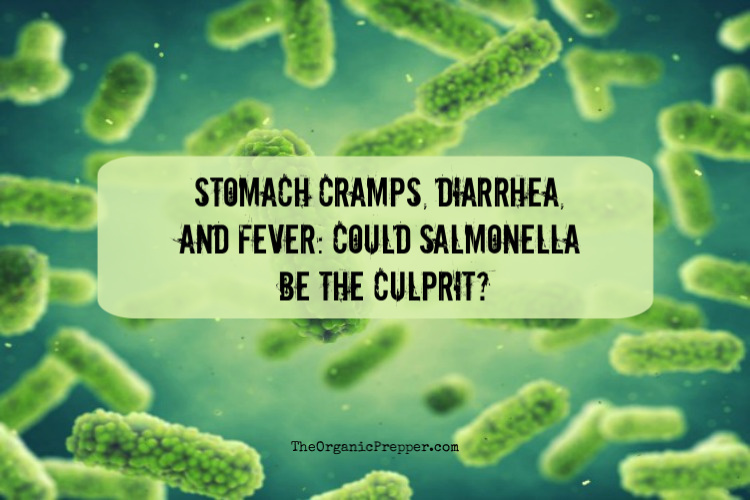 In our continuing series on foodborne illnesses we’re going to talk about the second most common illness, Salmonella, and how it can affect us now, and in our preps. But before we delve deeper into that, I think it’s important to note a recent announcement by the CDC regarding another salmonella outbreak involving pig ear dog treats.

“CDC and FDA are advising people not to buy or feed any pig ear dog treats, including any that may already be in homes. People can get sick after handling the treats or caring for dogs who ate the treats. Dogs might get sick after eating them. 16 ill people have been added to this investigation since the last update on July 31, 2019. 143 people infected with the outbreak strains of Salmonella have been reported from 35 states.” Published September 5, 2019

So, what exactly is salmonella?

To that question we have to ask; which serotype or strain exactly are we talking about? When I first sat down to do this article, I felt it was going to be fairly straightforward and simple. Boy was I wrong.

According to the Oxford Dictionary, salmonella is “a bacterium that occurs mainly in the intestine, especially a serotype causing food poisoning.” Ok…  What in the world is a ‘serotype’? “a serologically distinguishable strain of a microorganism.” So… a serotype is the same thing as a strain? Simply put – No. What, then, do they mean when they say there are more than 2000 different strains of salmonella? And why does that even matter? It looks like I need a lesson in microbiology before I can write this article. So much for straightforward and simple, huh?

It appears, however, that salmonella strains are categorized based on the antigen set of each strain. Antigens stimulate our bodies to produce antibodies to fight the pathogen. Do more strains mean our bodies need more varying antibodies to fight it off? I don’t know. But I do know that this is another nasty bug, and a powerful one at that.

Salmonella is a bacterium that can occur in raw poultry, eggs, beef, milk, on fruit, vegetables, peanut butter, water… To put it bluntly, salmonella comes from the intestines of humans and animals, which includes birds and reptiles too. If it can have feces in it, or on it, it can be infected with salmonella, and thus infect us. The same goes for handling snakes, turtles, lizards and so on. You can also get it, believe it or not, from cats and dogs. Especially if you feed them raw meals. However, I must state from personal experience that neither my family or I ever got it from my son’s pythons, and we never got it from any cats – pets or strays – even when we fed them a raw diet of chicken (which they absolutely loved). I’m pretty sure, if for no other reason, it was because we washed our hands each time with soap and water.

What are the symptoms of salmonella infection?

Usually, most people experience diarrhea (which can be bloody), stomach cramps, and/or a fever. They can also have nausea, vomiting, or a headache (most likely due to fluid loss). Some people can even develop joint pain known as reactive arthritis that can last for months or years. Symptoms of a salmonella infection can start within hours up to 4 days after an infection and can last at least a week.

All those symptoms are quite common of many illnesses though and don’t necessarily indicate you have a salmonella infection. How do they determine the illness? With a fresh stool sample taken straight from the person who’s sick. Sounds fun, huh.

Once the sample is taken it is cultured to determine if that is indeed what the patient has. A person or animal who has a salmonella infection is very contagious and remains that way from 6 to 72 hours before showing symptoms, up to several months after the symptoms fade.

How is salmonella infection treated?

The treatment for a salmonella infection depends on how common the strain is. Usually, the patient is advised to drink plenty of clear fluids, rest as much as possible, and is given an antiemetic (anti-nausea medication) or anti-diarrheal and sent home unless secondary problems like dehydration are severe. The reason for this is because in most cases the patient is better before the results of the culture come back. That’s usually not a need for concern though because in our modern world most people recover on their own from salmonella infections without hospitalization.

However, if you have a severe case, if your doctor thinks the bacteria have entered your bloodstream, or if you have a compromised immune system, you may be prescribed antibiotics. That’s why I said earlier that this is one nasty, powerful bug.

The CDC published an article on August 23, 2019 titled “Outbreak of Salmonella Newport Infections with Decreased Susceptibility to Azithromycin Linked to Beef Obtained in the United States and Soft Cheese Obtained in Mexico — United States, 2018–2019”. The title says it all, but the article goes on to indicate that azithromycin (also known as the antibiotic “Z-Pack”) was the go-to antibiotic for salmonella infections. (The common antibiotics used in the past were azithromycin and ciprofloxacin; ciprofloxacin no longer works against Salmonella Newport infections.) It is now being seen that a strain of Salmonella Newport, a relatively new serotype found in livestock, has decreased susceptibility to azithromycin as well.

This seems to be a common theme now as more and more infections are becoming quite accustomed to medicines altogether.

“The discovery and widespread use of antibiotics many decades ago have saved millions of lives. Infections that were once a death sentence were easily treated with the medications,” says Dagny Taggart of The Organic Prepper. “Unfortunately, many antibiotics are now becoming ineffective because bacteria have become resistant to the drugs.”

Therefore, we need to make certain we don’t get salmonella infections.

Here are some ways to avoid infection with salmonella.

I stand by handwashing to be the simplest way to help prevent contracting a salmonella infection as long as you wash your hands for at least 30 seconds in warm soapy water, but I’m no expert. Luckily, heat kills salmonella very well. If we cook foods to a minimum of 165°F/74°C internally, the salmonella is killed. I found another way to decrease the chances of a salmonella infection that I hadn’t heard about from a website I enjoy and trust; washing your fruits and raw veggies in vinegar. Apparently, while it doesn’t claim it will kill all possible salmonella, vinegar more than water helps to destroy salmonella when used as a wash/rinse. This is because of the acidity of the vinegar (lemon helps too). Big props to all the lovers of vinegar as a cleaner!

For surfaces, bleach kills salmonella very well. I will mention here that while Clorox states on their container that their product, Clorox Wipes, kills Salmonella Enterica, remember that’s only one kind of salmonella – not all. These wipes do not contain chlorine bleach either. Lysol wipes make the same statement but they contain hydrogen peroxide. Salmonella is immune to hydrogen peroxide.

How does this bacterium affect us as preppers?

Majorly, and here’s why. Some products we store away are not things we can easily heat to 165°F/74°C without destroying them. Like the little packets of trail mix and the packaged peanut butter and crackers in our go bags. Salmonella does need oxygen to survive, but it can exist in low oxygen environments, so even vacuumed sealed/packed packages must be thoroughly inspected before opening and eating. And what about the cans of fruit cocktail or pineapple? I think at that point fruit cake would become a good friend of mine. Since salmonella survives freezing, all frozen fruits must be washed extremely well or cooked.

Sadly, even dehydrated items can be the cause of salmonella poisoning. As someone who dehydrates a lot, this makes me nervous. According to the National Institute of Health’s website, an experiment was done by dehydrating garlic. “Salmonella survival during thermal dehydration of fresh garlic and storage of dehydrated garlic products… Under a typical storage condition at 25°C and ambient relative humidity, Salmonella could persist over months with the population gradually declining.” Although the article doesn’t appear to state if the garlic was later stored in an environment void of oxygen, it does say that larger granules of the garlic were impacted the most.

So again we can see that what we store and how we store our foods will make a big impact on what we have when we open those foods up later.  I would say many factors are going to be important. Obviously, cleanliness is one of them, but also the rotation of our goods as we go. That way if we do end up sick, we have modern medicine to help us through and can correct any mistakes if we made them. While norovirus can survive without oxygen, salmonella seems to have a more difficult time doing that so I would suggest airtight containers and using O2 absorbers and desiccants, which can be purchased right from Amazon, as an added precaution.

In the meantime, remember to cook your foods when possible to an internal temp of 165°F/74°C – the kill zone for salmonella, and if you don’t already can your own foods for long term storage, consider learning. Until next time!

Are there things you do to avoid infection with salmonella and other infectious agents? Please share your thoughts and tips in the comments.