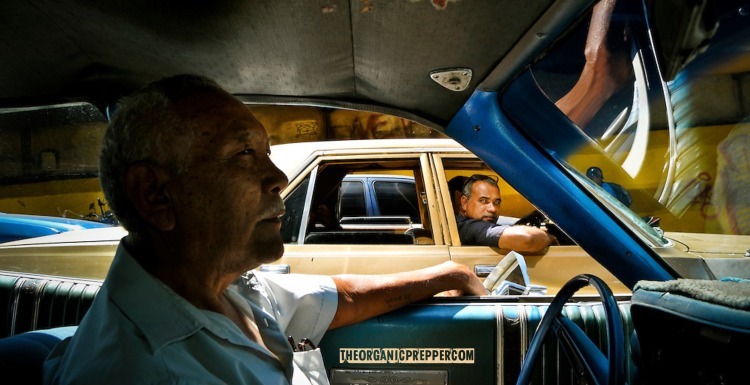 Venezuelans who chose (or had to), for whatever reason, to stay put in Venezuela had to endure somehow the circumstances resulting from the collapse. How those Venezuelans survived the economic collapse might serve as inspiration for you. After interviewing several brave childhood friends from my hometown, I compiled the following experiences on how they have protected themselves, their savings, and their belongings.

Below I disclose the advantages and disadvantages of each one of the critical elements Venezuelans used to enable their protection.

Disclaimer: this is not advice.

Each of these worked for the sort of collapsed economy around here. Maybe in your neighborhood, it is very different. For instance, real estate in the middle of New York City could look appealing to some investors. However, the average prepper would surely choose some other place, 95% of the time. (I’d love to hear your comments on this one.)

I have documented this collapse and described how my countrymen have intuitively protected their patrimony (property) with as much detail as I can.

The ways these Venezuelans survived the economic collapse are as follows.

Contrary to other countries, in Venezuela, new cars are no longer available to the public. No vehicles are being assembled. The mafia seizing power dictated that new cars leaving the lines were only for the elite. To constantly publicly humiliate us, they wiped out the concept of the middle class to instate the “poor people revolution.”

For a “revolutionary” establishment seeking to impoverish people, the ability to buy a new car would symbolize the middle class getting ahead with hard work. This concept would lead to undesirable consequences for that establishment because poverty would be the only means of control and subjugation.

Why is buying a used car in Venezuela better than a new one?

Well, the average Venezuelan has to learn a lot about how a car works. Services like AAA or tow truck services are no longer available. Meaning that if you get stranded in the middle of nowhere, no one will go there unless it’s a VERY good friend.

Although everyone loves a new car, crime is such that it’s not generally a good idea. The black market for brand new original parts is craving for new vehicles. Even some well-cared cars are in jeopardy even if they’re not new. Therefore, better to opt for a used car and keep it well maintained. Usually, the owner will sell the vehicle for the same price they paid upon purchase. Meaning the wear and tear cost is absorbed by the new owner. In general, this is something that is not usually negotiable.

Venezuelans do not bargain. Or try to avoid it for some reason. My countrymen don’t like someone else thinking they are “poor.” However, most of us fail in that category, income-wise. People I know buy damaged cars, investing a few hundred, and reselling them at a profit. But these are highly skilled mechanics, usually with a garage large enough to keep two cars for sale while fixing two or even three other vehicles.

Real estate can be a double-edged sword, depending on where you get it and your particular situation. The main advantage is real estate is difficult to steal. (However, the commies issued “laws” for that here.) If you have trusted people, you could rent the place for extra income. We all know this is not a high liquidity asset, but it surely beats bonds and shares in a deprived economy.

A Chinese-origin woman I know slowly bought one piece of real estate after another. She started with a small mom-and-pop shop (her Chinese dad never accepted her marriage to a Venezuelan guy and left her out of family business). Now she owns one of the biggest supermarkets in town and is acquiring more real estate. Because she has dual citizenship, she is not likely to be subject to asset confiscation. I’m sure the treatment for us simple Venezuelans wouldn’t be the same: they’ve made us know that enough times already.

My family never owned real estate to the levels some others have. The difference between the wealth she has accumulated and our current situation is vast. Even unproductive land 15 years ago is valuable now, because of the population growth! More developed countries have the advantage of laws to protect and defend private property. Something that won’t happen around here.

Once someone invades a patch of land, the law will protect them instead of the legitimate owner. Because of those laws, commercial space at street level, with apartments on top, is more valuable. Usually, a garage next to the local is in place. Then, one could rent underneath, live on top, upstairs, and make sure the tenant will not disappear, abandoning the business without us knowing.

The following is about two fellows who, back in the day, bought cryptocurrency to have a wealth haven. (Don’t understand crypto? Check out this free e-book that explains how it can help you survive an economic collapse.)

A coworker purchased some USD cash from me (I used the national currency to buy my CNC machine, believing that I would receive the investment return someday). He used that to repurchase cryptos in 2012-13. I’ve been in touch with him, and he said the best business he has made in life was his divorce and buying/holding cryptos.

His method to store wealth was way better than mine. Even though I acquired equipment to build a business from the ground up, the economic collapse stomped on that. My attempt is not the only example that ended poorly. If someone in the “government” believed the average Venezuelan would buy that fiasco, the mistake was monumental. Sure, articles like this one clarify why this happened.

The other guy who invested in cryptos bought a car, and the last thing I knew about him was he was coming back from Ecuador. He had invested in cloud mining, and he was lucky with that. Personally, I never tried it, too many scammers out there. I knew he took his chances and multiplied his cryptos. Other than those two examples, I can’t say much. Understandably, people are incredibly secretive regarding their crypto ownership.

Cryptos seem to have been working for Venezuelans, no matter the internet-related problems, power grid faults, and generally poor quality of services. This is not a topic people would talk about out in the open as there are too many curious eyes and ears.

Suppose you own a tire shop, for example, and receive a currency that devalues each day. In that case, you’re in deep S. If the usage of USD or another currency is prohibited by law (as it was in Venezuela back in the day), well, it’s terrible news. I learned of people that made a few trades, and they sold everything they could to stockpile materials for their business. Those working with HVAC got tons of copper/aluminum pipe, R22 gas bottles, welding torches, seals, oil, spare HVAC gas filters, duct materials, and everything related to running their business. People told me how their living rooms held 110 volts cable brand new boxes stacked up all over, under the dining table, beds, closets, anywhere there was some free space. This was their plan for business continuity.

Those dealing with auto parts stored bearings, regulators, all sorts of car parts in their homes. Stocking up their business warehouse was NOT wise. Usually, competitors would send an NG command to their door with an anonymous call saying they were “hoarding.” No matter if the shop owner provided proof of ownership, once the command caught the poor shop owner with a ton of material on the shelves, “Money talks, paper walks.” You know what this means.

My father is an electrician, as I’ve mentioned previously. A few guys I know work well in the electric apparatus repairing business. Some of them fled. But, some others decided to stay and bravely defy the collapse. These have earned my admiration. They stocked up in materials for their business, like copper wire, isolation cardboard/paper/fabric, coatings, and many other high-duration, long shelf-life materials.

People stockpiling things to work with are not targeted

The supply chains are again on track; last year was pathetic, but they could make it and keep their raw material losses to a minimum. Meaning that they couldn’t replenish some of the stock but didn’t lose too much.

However, doing this with food and similar staples was a risk: authorities would seize whatever they like, and people would appear in the media as “hoarders,” going to jail.

The most important part was that the businesses kept running because authorities do not target those stockpiling stuff to work with, which is a great lesson.

These Venezuelans survived the economic collapse

I know what it is like to try to start over in another country. Under the current circumstances, I wouldn’t do it again. The Great Reset and this decade is the less appropriate one to make significant, life-changing decisions. I can feel it in my gut, just like I knew what would happen when Uncle H died.

I hope that you found some inspiration in the way these Venezuelans survived the economic collapse. There is always a way.

Thanks for your sponsoring, support, and be safe!

Does this give you some ideas for withstanding economic collapse?

Do you have some creative ideas for holding out while the economy crashes down around you? What do you think of the ideas Jose discussed here? How do you think a collapse would look different in our country than the one in Venezuela? Let’s discuss it in the comments.