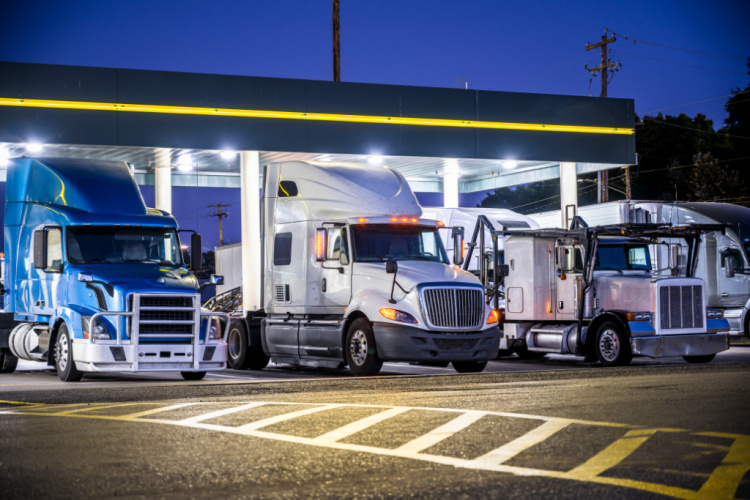 Rumor has it that a large number of independent truckers are planning multiple strikes in November during which they’ll stop transporting…well, everything. Considering that our supply chain is already in precariously bad shape, imagine the impact if transport also came to a halt.

Here’s how it’s being organized.

There’s a group on Facebook (for now – we all know how it goes on Facebook) called Stop the Tires Truckers that is organizing the strike. As of the writing of this article, more than 15,000 people had joined the newly formed group.

Here’s their message (and I’m also posting a screenshot in case it gets removed.) Note that they are specifically asking truckers who transport medical supplies not to participate. 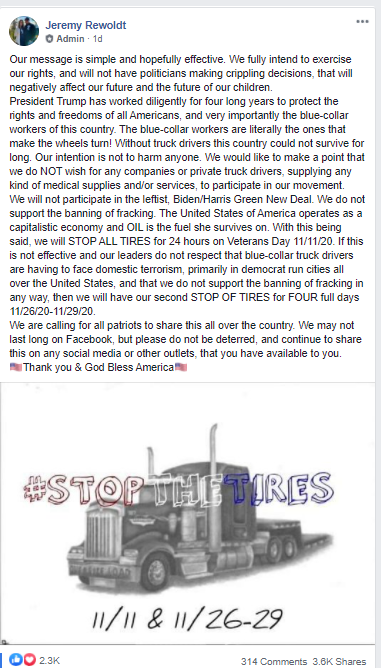 Our message is simple and hopefully effective. We fully intend to exercise our rights, and will not have politicians making crippling decisions, that will negatively affect our future and the future of our children.

President Trump has worked diligently for four long years to protect the rights and freedoms of all Americans, and very importantly the blue-collar workers of this country. The blue-collar workers are literally the ones that make the wheels turn! Without truck drivers this country could not survive for long. Our intention is not to harm anyone. We would like to make a point that we do NOT wish for any companies or private truck drivers, supplying any kind of medical supplies and/or services, to participate in our movement.

We will not participate in the leftist, Biden/Harris Green New Deal. We do not support the banning of fracking. The United States of America operates as a capitalistic economy and OIL is the fuel she survives on. With this being said, we will STOP ALL TIRES for 24 hours on Veterans Day 11/11/20. If this is not effective and our leaders do not respect that blue-collar truck drivers are having to face domestic terrorism, primarily in democrat run cities all over the United States, and that we do not support the banning of fracking in any way, then we will have our second STOP OF TIRES for FOUR full days 11/26/20-11/29/20.

We are calling for all patriots to share this all over the country. We may not last long on Facebook, but please do not be deterred, and continue to share this on any social media or other outlets, that you have available to you.

One website reported on a trucker strike specific to New York State due to working conditions during the pandemic.

They can make all the toilet paper in the world—but what if there’s no one to deliver those rolls to stores? That’s a looming possibility in New York, where more than 100 truck drivers are threatening to strike and shut down supply chains to Whole Foods and Stop & Shop supermarkets in the tri-state area. The drivers say that their employer, the grocery distributor United Natural Foods, better known as UNFI, hasn’t been giving them basic PPE nor have they disinfected their trucks in months. The New York Post says it’s not just TP at stake, but rigs full of organic freezer meals, seltzers, and pasta boxes, among other shelf-stable items. (source)

While there are few official reports, the buzz on Twitter is that truckers are angry about the outcome of the election and that they intend to show the country the power they wield over our well-being. some of the videos mention November 29th as the day it all happens.

Here are a few examples. (There’s some profanity. And a lot of Purge sirens. You may want to skip the videos if you’re upset by that.)

Wow, apparently Truckers are going on strike across the nation in response to the mass voter fraud that occurred in the presidential election. Get Ready! pic.twitter.com/ova28ovJ8g

To see more, search the hashtag #truckerstrike on Twitter.

This is not unprecedented.

In 2018, truckers in Brazil went on strike for 10 days and virtually shut down the entire country. Here’s an excerpt from a translated article about the event:

Little by little, Brazil began on Wednesday to recover from the effects caused by the truckers’ strike, which lasted ten days and paralyzed services such as fuel supply and distribution of food and medical supplies, bringing the country to the brink of collapse.

The category stopped on May 21 to demand a reduction in diesel oil prices – which have risen more than 50% in the last 12 months. The main claim was that taxes are levied on fuel, such as PIS-Cofins. They also required fixing a minimum table for freight charges.

During the strike, anti-corruption speeches also joined the banners defended by the movement, which in a few days became expressive and caused impacts to the population, in several segments. Some groups of protesters have come to express support for a military coup.

With trucks stopped, partially blocking the highways, fuels stopped being delivered to various stations and other activities that awaited raw materials and essential products, such as food, also ended up short of supplies.

The movement began to lose strength over the weekend, after an agreement between some representatives of the category and the government, and the entry of the Army on the scene to unblock roads and guarantee the supply to the various sectors affected. (source)

Check out the entire article for the timeline of the 10-day strike. The strike is credited with having exposed extensive political corruption shortly before that country’s elections.

As well, in 1973, there was an Independent Trucker Shutdown during the oil crisis.

On December 3, 1973, JW Edwards ran out of gas at 10:00 pm after struggling to make his run amid fuel rationing. This blocked Interstate 80. JW got on his CB radio and eventually, other truckers stopped to help him out. Within an hour the protest had grown to hundreds of semi-trucks. In just a few hours truckers across the country were blocking the nation’s roadways, essentially shutting them down and causing traffic jams 12 miles long.

The strike lasted three days but remember that this was in a day and age when 70% of the countries’ goods were hauled by independent truckers. Now there are more companies that own fleets and just hire drivers.

That they had the numbers to get the government to listen was a major difference than what is going on now. The protests were largely peaceful except in Ohio when some truckers decided not to comply. The Governor deployed the National Guard and used tear gas.

For a while, the peace would last. The dealbreaker came when it was clear that now that government officials had calmed everyone down, they were in no rush to fulfill any of the promises they made. The brief strike did not cause a big enough supply disruption. (source)

Protests started again and this time they took a darker turn. On December 13th and 14th another shutdown occurred but this time a lot of truckers started to harass and even turn to sabotage when other truckers refused to shut down. Tires were slashed, vehicles were shot, and one driver was even stabbed!

This was not the end either. As the protests entered 1974 some independent truckers not only shut down, they blocked roads and even started throwing bricks off of overpasses.

A resolution came in February 1974 when truckers were granted the right to add 6% fuel surcharges to their bill and they were guaranteed that truck stops would be given fuel priority so that they did not have to compete for rationed fuel supplies.

While it is good that truckers gained a voice, it was not without damage. As a result of the shutdown and strikes, 100,000 truckers were laid off, several people died, and the public experienced supply disruptions. (source)

Whether this looming strike is likely to turn ugly or not is anybody’s guess, but the United States hasn’t had a great track record with protests remaining peaceful this year, even if they start out that way.

How will a trucker strike affect us?

In just five days without trucks running in the United States, chaos could erupt due to our “just in time” merchandising.

Most retail stores no longer stock up on food but have a “just in time” ordering system that relies on regular shipments.

Just-In-Time (JIT) inventory refers to an inventory management method whereby the goal is to have inventory readily available to meet demand, without having any excess quantities on hand. With this approach, merchants can hold minimal stock supplies while ensuring stock-outs don’t happen during peak selling periods. Balancing the goals of avoiding stock-outs while minimizing inventory costs is at the heart of JIT. (source)

If those shipments aren’t coming in, then the shelves will be bare in very short order. People will see the store getting more empty, and this will compel them to buy everything they can get their hands on until there is truly nothing left. (source)

This video goes into more detail.

Our supply chain is already broken and likely to get much worse as we get closer to the holidays. If goods are no longer being transported, it would be another nail in the coffin of that supply chain. I strongly suggest you prepare now for the holidays and continue stocking up as much as possible while you can.

Do you think the trucker strikes will occur in large enough numbers to cause disruptions?  Do you support the strike? What do you think will be accomplished if the strike does occur?