Here’s Why I Voluntarily Closed My Preparedness Group on Facebook 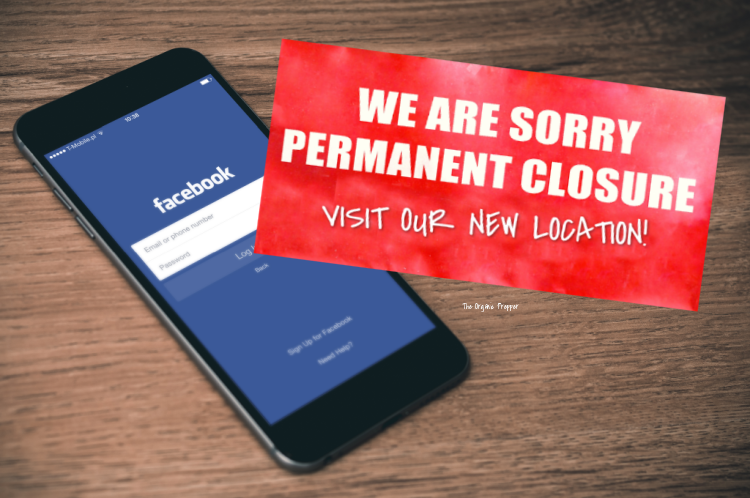 For several years, I ran a very popular emergency preparedness group on Facebook called Prep Club. A couple thousand members and a great team of moderators kept the group free of hot-button topics, and the core members of the group became extremely close-knit. Today, I voluntarily made the decision to permanently archive all my preparedness groups on Facebook despite the high quality of the content.

The short version is this:

By archiving the group, the years’ worth of high-quality content remains available to members. They can’t interact but they can still go in and search for recipes and tips. If I had waited, Facebook’s moderation team was extremely likely to have deleted the entire group and all that information would be lost forever.

Now, if you have questions, stick around for the longer version.

Yesterday, I woke up to some messages that appeared to be right out of Orwell’s classic, 1984. I redacted the members’ names and images for privacy purposes. Here are the redacted messages. 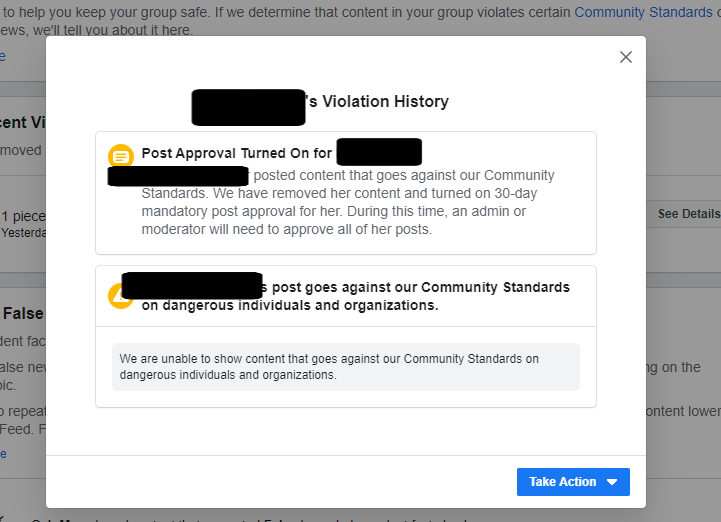 So right off the hop, Facebook had decided content in our extremely well-moderated group was composed by “dangerous individuals and organizations.”

What did the removed content say? Well, we have no idea whatsoever because Facebook is “unable to show content that goes against” their community standards. But they want us to manually approve or discard all the posts that person makes for the next month so she doesn’t “re-offend.” Except we have NO IDEA WHAT THE HECK SHE POSTED. 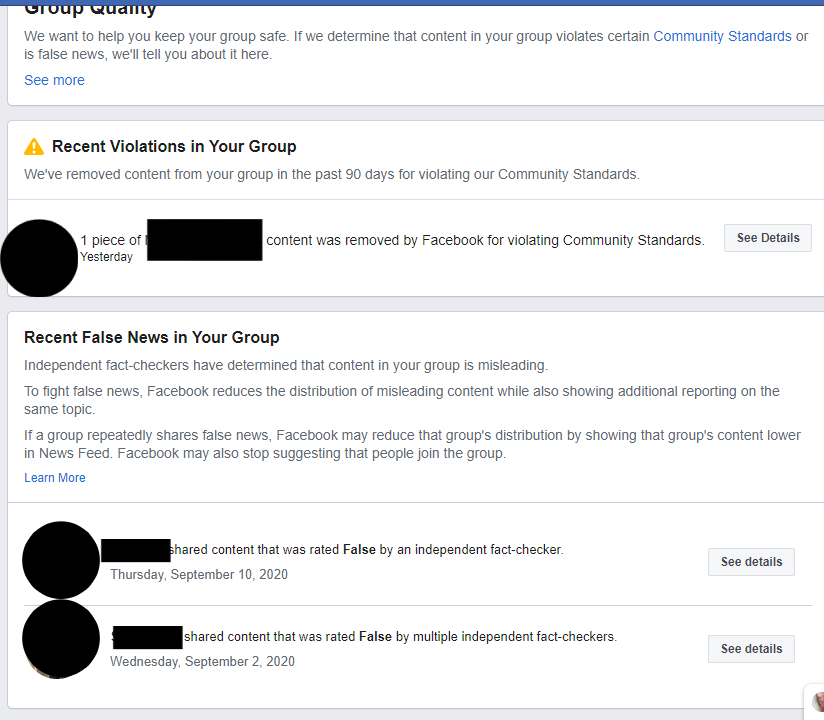 They’ve been “fighting false news” in our group since September and never even notified us that they’d removed some of our content. When I clicked on “see details” I got the same message as above. “Y’all posted such bad stuff we can’t even show you what it is.”

In an effort to save the group – which was extremely busy and popular – I turned on moderation for all posts so we could try and keep things running.

But then we learned that Facebook was going to continue to “clean up” groups.

Then this morning, my friend and prolific author, Jim Cobb from Survival Weekly, shared an article explaining how Facebook was going to “clean up” groups like mine. Most worrisome is the highlighted comment:

In addition, group members who had any community standards violations in a group will now require post approval for the next 30 days. That means all their posts will have to be pre-approved by a group admin or moderator. This could help groups deal with those whose behavior is often flagged, but it could also overwhelm groups with a large number of users. And Facebook says if the admins or moderators then approve a post that violates community standards, the group will be removed. (source)

I took a screenshot too because y’all know how things like this have a habit of vanishing into the ether of the internet.

Just so we’re all singing from the same songbook, let me break this down.

Sorry, but the only way to win that game except not to play it. So, I opted not to play it and I archived all of my preparedness groups so that no further content is able to be posted or commented upon. I warmly invite you to join our forum instead, which is on my server and cannot be moderated by outside entities.

Before anyone starts hollering about free speech, please note that I believe Facebook has every right to make their own rules. I built my group on their platform, not the other way around.  The right to free speech applies to the government – they cannot crack down on you for saying whatever unpopular thing that is on your mind. At this point, it does not apply to private platforms like Facebook, YouTube, and Twitter. It’s important to note that the FTC is debating anti-trust actions against the likes of Google, Facebook, Apple, and Amazon over concerns they’ve become monopolies and hold too much power.

But for right now, these entities have the right to approve or delete whatever they want to on their own platforms.

I think what they’ve done is awful but it isn’t unconstitutional to be awful.

I think it’s censorship, but that is also not unconstitutional if a private platform is doing it.

I joined their club and agreed to their rules. My option, if I don’t like their rules, is to go to a different playground with guidelines that I like more. But keep in mind that Facebook used to allow our posts and conversations and then things changed.

That’s why I will not ever be moving my groups to any other social media outlets. Rules that may be palatable today could change by tomorrow and then I spent all that time and energy again, building a house on borrowed land. That’s why I am building my own playground here in our forum.

I figured this day was coming.

A couple of years ago, Selco and I put our heads together and started a small forum on my server. We focused on privacy, a few rules to keep things civil, and a platform that I own. I knew that the day would come when I needed to have this up, running, and to which we could seamlessly transition.

You can now find us at our forum, where you don’t have to use your real name, prove your identity, or bow to Big Tech. If you have ANY problems getting your account set up, please reach out to us at the email on the image below or use the contact button at the top of the home page. We will be making improvements to our forum over the next few weeks but right now, the most important thing is to get signed up and start talking to each other. 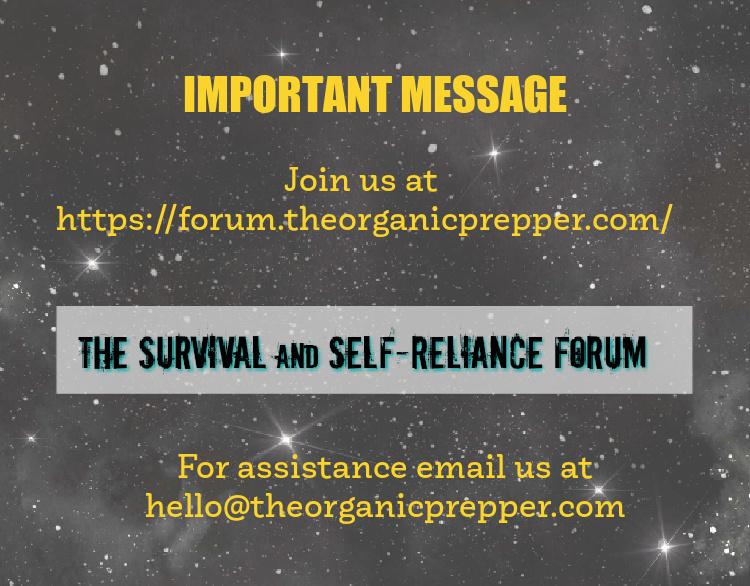 I’ve been covering censorship, technological surveillance, and attempts to control the narrative for more than a decade now. I knew this entire time that while social media was great for helping me build my website, I would not be able to use it forever. In a world where people who approve of censorship hold most of the microphones and most of the power, it is only a matter of time before those with controversial opinions that fly in the face of political correctness no longer have a place on these platforms.

Today was that day for me.

I would rather do it voluntarily and on my own terms than to be unceremoniously booted off because I believe in liberty.