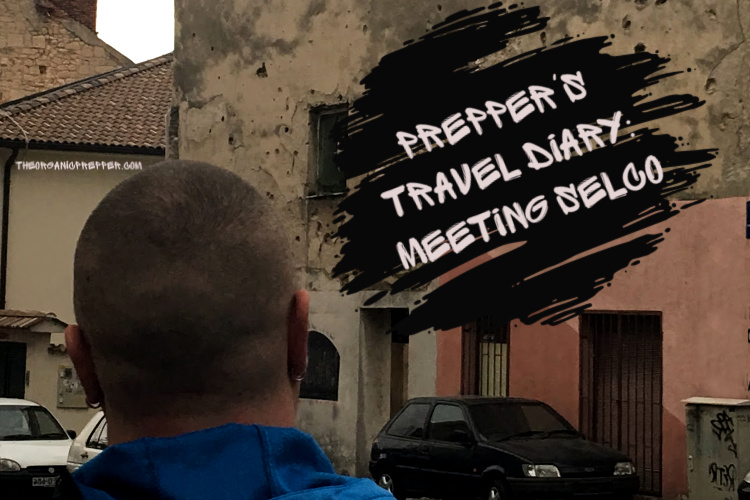 That’s not unusual since he only presents the back of his head for the camera. When he said hello in English, I recognized his voice – we’ve spoken online before. Despite that, having brunch with Selco was pretty darn cool and I barely restrained myself from fan-girling a little. 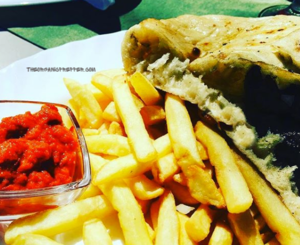 We sat outside in a beautiful courtyard with a fountain. The restaurant was in an old, traditional building in a tourist-friendly area. The menu had Bosnian on one side and English on the other side, so ordering was no problem at all.

He recommended cevapi and ordered for me. Cevapi is a mixture of deliciously-seasoned ground meat rolled into little sausage shapes. It’s placed in the most delicious bread I’ve ever had, called lepinja, which is sort of like a pita pocket but much fluffier. It was served with a plate of tomato, cucumber, and finely shredded lettuce, along with a sauce made from roasted red peppers. There were also some french fries.

We got cold drinks while we were waiting for our food. The soda pop there comes in glass bottles.

Selco was a lot taller than I expected – for some reason, I pictured him as about 5’10” but he’s probably closer to 6’2″.  He had his dark hair in a buzz cut, a short beard, blue eyes, and looks like a person who has spent a lot of time outdoors. He’s very polite, an old-school gentleman who holds doors and walks on the outside of the sidewalk.

His English is very good and the Balkan accent sounds a lot like a Russian accent. Initially, he was fairly quiet but the conversation picked up quickly. He has a dry, dark sense of humor. Soon we were laughing like old friends – and his laugh is loud and contagious. Talking online is one thing, but in person is so much more fun.

He enjoys writing and we talked about the upcoming books and courses he has planned. (And boy are we in for a treat!)

We went for a walk.

Selco has some habits that are ingrained. He sits facing the door. He backs into parking spaces no matter how innocuous the place is, so he can leave fast. And speaking of fast, I had to hustle to keep up – he walks very quickly. When he saw he was walking ahead, he slowed down but it wasn’t long before he was speeding past again. 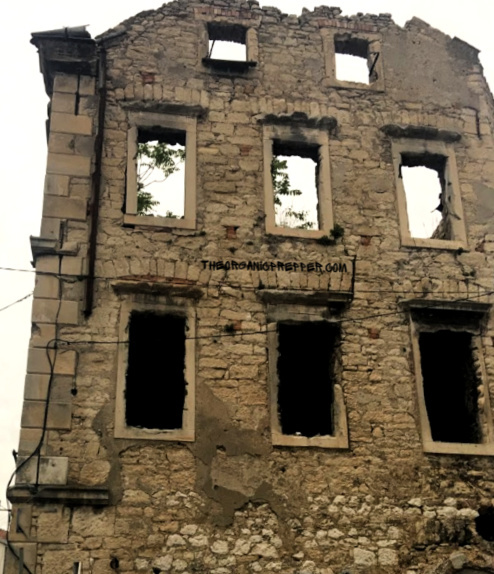 We walked through a market that has been there for hundreds. The stones used to make the streets there are so polished from the footsteps of centuries that they’re incredibly slippery. No problem when you’re walking on a flat place, but the hills felt like trying to make your way down the driveway after an ice storm.

We walked past some buildings that have been abandoned since the war. Selco told me what purposes they had served before and for a few of them, shared the memories of the nights they were destroyed. He was a great tour guide and pointed out many things I would have missed.

Then we went for a drive.

Parts of Bosnia are very mountainous and that was true of our meeting place. We went for a car ride and soon we headed up a curvy road to the top of one of those mountains.  Selco laughed when I called it a mountain and said, “That is just a hill. The mountain is behind it, you will see.”

Once we got to the top, you could see for miles and miles. Many of the stories Selco has shared made so much more sense from that peak.

Villages are nestled in the valleys, and snipers set up bunkers at the tops of the mountains. We were standing in one such bunker (which was really a pile of rocks for shooters to hide behind if someone shot back). Selco pointed out other locations on other nearby mountain tops.

Even without a scope, I could clearly see the villages below. I could see the river running through where people went for water, wide open and extremely visible. He pointed out the hillside where he and his friends used to go in the hopes that MREs would be dropped that night and from our vantage point, I could easily see how the snipers could pick off hungry people who were just hoping for some food. From that great distance, it would have been impersonal, almost like a video game, for the shooters.

When coming back down the hill, we stopped for a herd of sheep that were blissfully unconcerned about our car and meandered slowly across the road. Goats and a goatherd moved out of the way a little faster. There was an adorable puppy attempting to herd the goats, too.

Back in the city

When we returned to the city, Selco showed me the lines. In some places, enemies lived directly across a narrow street from one another. Some streets were so narrow that we would consider them more like “alleys” in the US. People cut each other off in traffic with no animosity whatsoever. Motorcyclists make their own lane in between the two car lanes and whip through there without a care in the world. People pass wherever they feel like passing.

Selco got a good laugh at my shock but I couldn’t believe that there were no accidents. For the record, he is a great, non-scary driver. Like seriously, the narrow spaces he maneuvered his standard transmission car through were mindblowing.

In the city, Selco showed me a few places that he talks about in his articles. They were all much further apart than I had imagined. I thought of the treacherous routes to get from point A to point B while hungry, thirsty, on foot, and with people aiming shells an bullets at you. Seeing it in person sure puts it into perspective. Selco does a great job describing it but seeing it is really intense. The miles they walked, the bullets they dodged, the amount of time it must have taken to stealthily travel through a city that was at war from without and chaos from within. It was truly eye-opening.

The other thing that really came to life was how many dangers people were avoiding during the Balkan War. Not only were the snipers on the hillsides shooting, not only were the armies lobbing shells, but the people within the city were threats.

Surviving wasn’t just avoiding the enemy armies. It was about avoiding enemy neighbors. Without the rule of law, the people in the city who had a tendency toward evil were able to do whatever the wanted. The only thing that could stop them was their targets who successfully fought back. Danger was constant. Nowhere was safe.

Bosnia is a beautiful place.

Really, after seeing all of this and learning from Selco, it is so encouraging to see how warm and friendly the Balkan people are. They want to feed you, talk with you, entertain you, carry your packages for you.

Amid the ruins are well-cared for homes with roses blooming riotously over the fences. Rosy-cheeked children play outside and wave hello without worry. People speak and laugh loudly. Maybe when you’ve been through what they have, you understand better why you must embrace life fully.

In the next article, I want to show you some of the war damage that is universal across the country.

Other articles in this series: 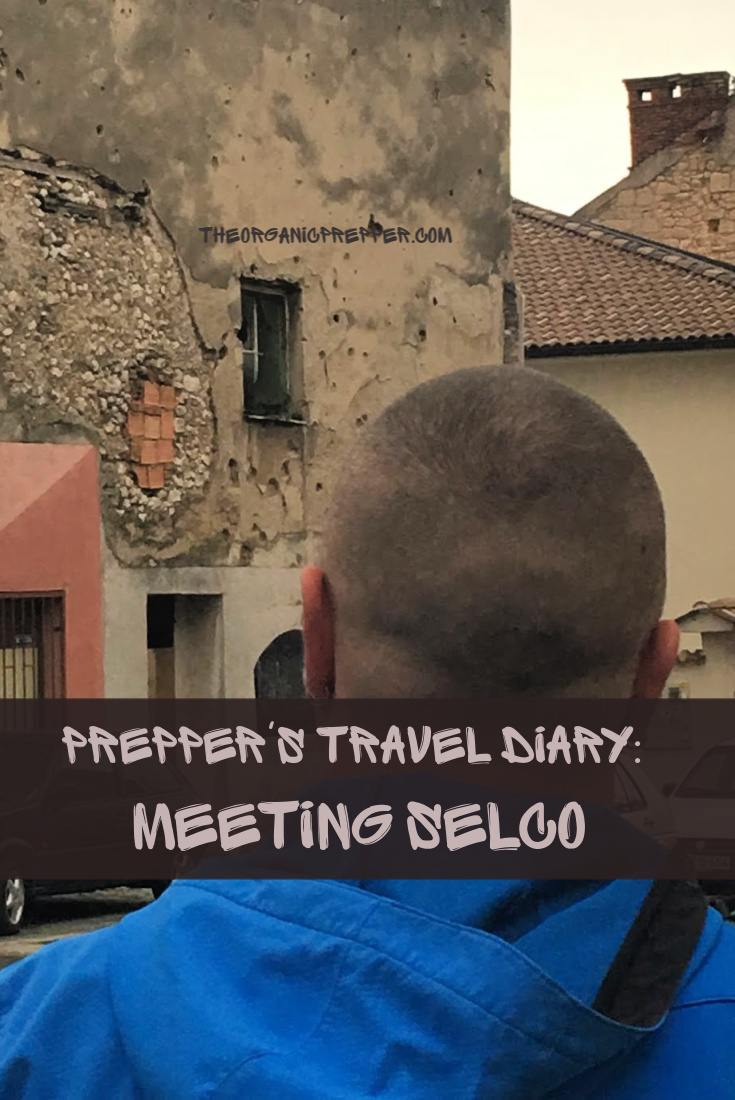