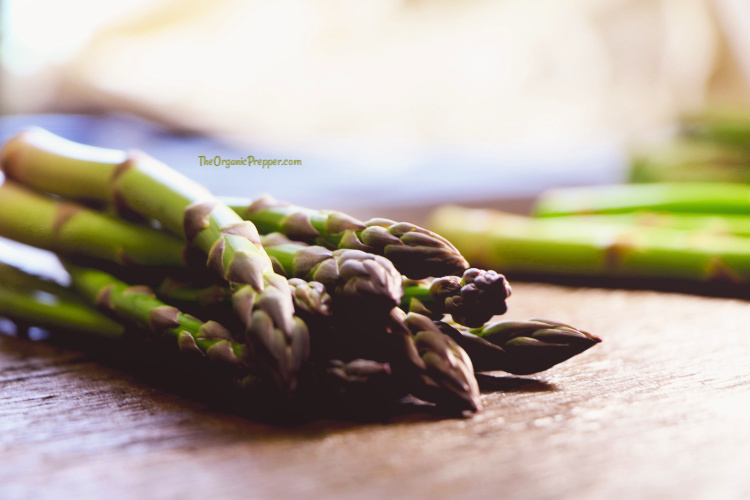 Some asparagus trivia:   Asparagus is a member of the lily family.  Historical records indicate the consumption of asparagus in Egypt in 3000 BC.  Ancient Greeks and Romans consumed it fresh and dried it to preserve it for out of season eating.

Most people detect a distinct sulfurous odor in their urine shortly after eating asparagus. However, there are some who seemingly do not notice the unpleasant odor.

Up until now, it has been unclear whether this is because these individuals do not produce the odor or because they cannot smell it.

Addressing this mystery from several angles, scientists from the Monell Center first used sophisticated sensory testing techniques to show that both explanations apply: approximately eight percent of the subjects tested did not produce the odorous substance, while six percent were unable to smell the odor. One person both did not produce the odor and was unable to smell it.

Next, DNA samples collected from each subject revealed that the inability to smell asparagus odor was linked to genetic variation within a family of olfactory receptors.

“This is one of only a few examples to date showing genetic differences among humans in their sense of smell,” said study co-author Danielle Reed, Ph.D., a Monell behavioral geneticist. “Specifically, we have learned that changes in an olfactory receptor gene can have a large effect on a person’s ability to smell certain sulfurous compounds. Other such compounds include mercaptan, the chemical used to add odor to natural gas so that people are able to detect it.” (source)

The pale green spears are absolutely packed with nutritional benefits.

Asparagus has also been used holistically since ancient times.  Asparagus is a diuretic and can be used to help with kidney or bladder issues.   Asparagus has cleansing properties which make it an excellent addition to a detox program.  Ayurvedic practitioners recommend asparagus as an aid to female reproductive issues, from PMS to infertility.

Asparagus is very easy to add to your own garden, because it is perennial.  Plant the crowns about one foot deep in sandy soil.  The Michigan Asparagus Advisory Board shares these interesting facts about growing asparagus.

Everyone has a decisive opinion on which asparagus is the best – the thick spears of the thin spears.  (My personal preference is the thin, delicate spears.)  Whichever you opt for, the tips should be tightly closed.  Heritage varieties of asparagus can be purple, white, or the most common, pale green.

Asparagus is very rarely sprayed with pesticide, which means it isn’t absolutely necessary to spend the extra money on organic varieties.

Wash asparagus gently and then store it in the refrigerator with a damp paper towel around the cut ends.

Spring vegetables are so loaded with flavor that all you really need to do is lightly steam them, and asparagus is no exception.  If you have thick spears of asparagus, use a carrot peeler to peel away the tough outer layer of the bottom part of the stem and cut off the woody end, before steaming.  Steam asparagus for approximately 5 minutes for tender-crisp spears that you can pick up and eat with your fingers.

I’m not going to lie – asparagus is one of those vegetables that really doesn’t preserve well. Some people don’t mind it, but to me, the mushy texture that you end up with at serving time is very unappetizing. This being said, home-canned asparagus is a very nice base for a wintertime treat of cream of asparagus soup.  (See the recipe below.)  Use preserved asparagus in soups, stews, casseroles and pasta dishes.

After washing your asparagus, cut it into 1 inch pieces.  Very thick pieces should be sliced down the center.  Blanch the pieces in boiling water for 30 seconds.  After allowing the asparagus to cool, pat it dry thoroughly and place it in a single layer on the dehydrator racks.  Dry in the dehydrator for about 6 hours.  Store your dried asparagus in tightly closed glass canning jars.

To freeze a fresh asparagus harvest, wash it carefully, then blanch the whole spears in boiling water for two minutes. Immediately place the blanched asparagus into an ice bath.  Remove the spears from the ice bath and pat them dry.  Place them on a cookie sheet in a single layer and place this in the freezer for two hours.  Store the frozen asparagus in large freezer bags.

Asparagus is a low acid vegetable so it MUST be pressure canned. The one exception to this rule is pickled asparagus, because the acidity of the vinegar makes it safe to water bath can. (See the recipe below.) The canning instructions are from my book, The Prepper’s Caning Guide.

It’s hard, but wait at least 2 weeks before popping open the first jar of pickled asparagus.

Cream of Asparagus Soup with Bacon

This savory soup is delicious served with a crusty bread.

Variation:  If you don’t have bacon or opt not to use it, you can substitute 2-3 tbsp of butter for the bacon drippings.