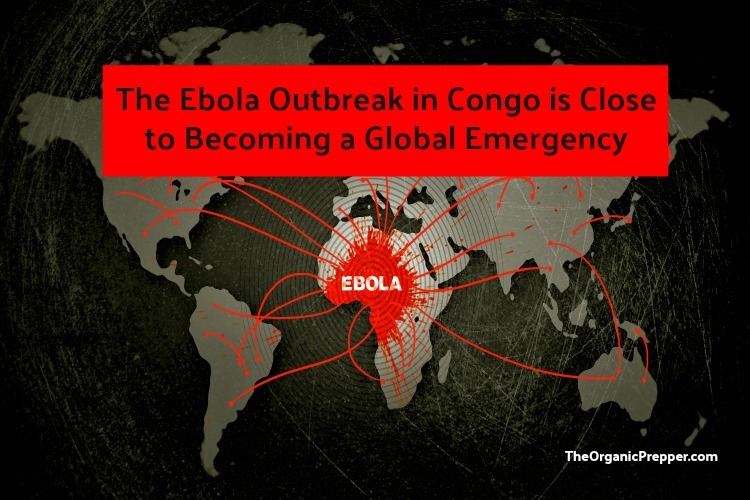 In recent months, public health experts have claimed the deadly Ebola virus outbreak that has been ravaging the Congo will not become a global health threat.

However, recent events and updates paint a less optimistic picture.

Last week, the World Health Organization issued a statement on the ongoing Ebola outbreak in North Kivu and Ituri provinces of the Democratic Republic of the Congo.

If this Ebola outbreak isn’t stopped soon, it could become a global threat.

The recent spike of cases increases the threat that the deadly virus will spread to other countries and efforts must be redoubled to stop it, the WHO said last Friday after a meeting of its expert committee.

On April 12, the WHO claimed that while the ongoing Ebola outbreak in Congo is of “deep concern” the situation does not yet warrant being declared a global emergency.

But don’t get too comfortable.

Here are a few concerning excerpts from the statement:

However, the Committee wished to express their deep concern about the recent increase in transmission in specific areas, and therefore the potential risk of spread to neighbouring countries.

Special emphasis should be placed on addressing the rise in case numbers in the remaining epicentres, notably Butembo, Katwa, Vuhovi, and Mandima.

Because there is a very high risk of regional spread, neighbouring countries should continue to accelerate current preparedness and surveillance efforts, including vaccination of health care workers and front-line workers in surrounding countries.

Cross-border collaboration should continue to be strengthened, including timely sharing of data and alerts, cross-border community engagement and awareness raising. In addition, work should be done to better map population movements and understand social networks bridging national boundaries.

The Committee maintains its previous advice that it is particularly important that no international travel or trade restrictions should be applied. Exit screening, including at airports, ports, and land crossings, is of great importance; however, entry screening, particularly in distant airports, is not considered to be of any public health or cost-benefit value. (source)

This Ebola outbreak has no end in sight.

The outbreak has become the second-deadliest in history, behind the West African one from 2014-16 that killed more than 11,300 people.

As of April 15, the outbreak has claimed 821 lives. The total case number is 1273. Unfortunately, both numbers are soaring, and experts say it is not even close to ending:

Some health experts predicted months ago that the outbreak would end within six months’ time. As complications keep appearing, the time frame is pushed back.

“Given the average number of cases we’re seeing now, this is not going to be over for at least another six months or more,” Tariq Riebl with the International Rescue Committee said Friday.

The chair of WHO’s expert committee that unanimously decided the outbreak is not yet a global emergency, Robert Steffen, said experts were “moderately optimistic” the outbreak could be contained within a “foreseeable time.” (source)

A top Red Cross official told the Associated Press he’s “more concerned than I have ever been” about the possible regional spread of the Ebola virus in Congo after a recent spike in cases.

Emanuele Capobianco spoke by phone ahead of a key World Health Organization meeting in Geneva later Friday about whether to declare the Ebola outbreak in northeastern Congo an international health emergency.

He called that rate unprecedented in the current eight-month outbreak. (source)

Here’s why Ebola is so dangerous.

As Daisy Luther explained in It’s Back: How to Prep for Ebola 2.0, “Part of the reason Ebola seems particularly terrifying is the graphic presentation, which is the stuff of horror movies. It is a hemorrhagic disease, which means that it can cause bleeding from the mouth, eyes, nose, and rectum.”

Here’s how it progresses:

The incubation period, that is, the time interval from infection with the virus to onset of symptoms is 2 to 21 days. Humans are not infectious until they develop symptoms. First symptoms are the sudden onset of fever fatigue, muscle pain, headache and sore throat. This is followed by vomiting, diarrhoea, rash, symptoms of impaired kidney and liver function, and in some cases, both internal and external bleeding (e.g. oozing from the gums, blood in the stools). Laboratory findings include low white blood cell and platelet counts and elevated liver enzymes. (source)

But it isn’t just the gruesome visuals. Ebola kills up to 90% of those infected, depending on the strain. This outbreak is the Zaire strain of Ebola, which is the same one that made it to America back in 2014.

Could an Ebola outbreak occur in America?

The odds of an Ebola outbreak occurring in the US have long been considered extremely low, mainly because of how the disease is transmitted. People in America usually don’t eat bushmeat, and we have much better sanitation, health education, and health care facilities.

National Geographic explains how Ebola is transmitted from animals to humans:

Ebola is a zoonosis, or a disease that can “spill over” into humans from nonhuman animals in the wild that carry the sickness. Researchers don’t know for sure which animals are Ebola carriers, but there’s evidence that fruit bats may play a role in spreading the virus to other animals, such as chimpanzees, gorillas, and duikers. Humans, in turn, can come into contact with the virus by interacting with infected animals, such as by hunting or preparing bushmeat.

Ebola spreads through contact with bodily fluids—such as blood, urine, feces, vomit, breast milk, and saliva—from people who have fallen ill or died from EVD. The virus gets into the body through breaks in the skin or through mucous membranes, such as those in the eyes, nose, or mouth. Contaminated needles or syringes also can transmit the virus, and there’s a strong chance that it can also spread via sexual contact. The virus can persist in semen, even after a man has recovered from EVD. (source)

It is possible that migrants from Africa could bring Ebola to the US.

Some independent news outlets are reporting that 20 African migrants from the Democratic Republic of the Congo were monitored for Ebola and other diseases at the border of Mexico and Laredo, Texas. Full disclosure: Those reports have been difficult to verify and may not be factual.

However, in an article dated April 16 and titled Hundreds of Africans tried to reach the United States. Now they’re stuck in Mexico, The Washington Post reported:

Although the vast majority of migrants passing through Mexico on their way to the United States come from Central America, hundreds are from African countries such as Congo, Cameroon and Ethiopia.

At the Casa Del Migrante Amar, a migrant shelter in Nuevo Laredo, Mexico, on the Texas border, more than 80 African migrants have gathered. Most are from Congo, Ethi­o­pia or Eritrea.

So, we do know that migrants from Congo are trying to get to the United States, but data on how many have actually arrived – and whether any of them have been screened for Ebola – are not available.

For now, getting prepared for a possible outbreak isn’t a bad idea. To learn how, please see It’s Back: How to Prep for Ebola 2.0.

Do you think Ebola will eventually spread to countries outside of Africa? Are you preparing just in case?