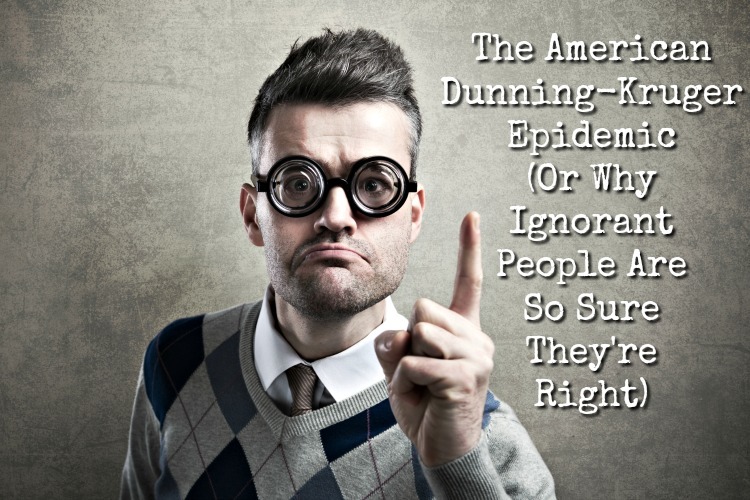 It’s time to address an epidemic in the United States. It’s one that could be deadly, particularly to liberty.

It’s an epidemic of Dunning-Kruger. It’s why ignorant people are so certain that they’re right.

What’s that, you ask?

The Dunning Kruger effect is a cognitive bias in which individuals, who are unskilled at a particular task, believe themselves to possess above-average ability in performing the task. On the other hand, as individuals become more skilled in a particular task, they may mistakenly believe that they possess below-average ability in performing those tasks because they may assume that all others possess equal or greater ability. In other words, “the miscalibration of the incompetent stems from an error about the self, whereas the miscalibration of the highly competent stems from an error about others.” (source)

And haven’t we all seen that lately? Let’s look at a recent example right here in the good ole USA.

Those who haven’t lived like the rest of us are the ones shouting the loudest.

We have high school kids who think they are experts on policy, firearms, and the Constitution, smugly telling us how clueless they believe we are.

We have movie stars who make millions from movies where they shoot people and who are protected by armed security guards, telling us that we law-abiding citizens who have guns are vicariously responsible for every school shooting that has ever happened.

We have wealthy city dwellers who live in buildings with doormen telling the rest of us that we’re nuts for wanting to protect ourselves.

And all of these people who want to loudly tell the rest of us how to live our lives have one thing in common: they are completely out of touch with the real world.

When you live in your guarded castles, you don’t have to worry about defending yourself from a rapist who might break in through your bedroom window. When you’re a kid, you can’t fathom the vast responsibility one feels as a parent to protect one’s children from home invaders or kidnappers. When you haven’t yet gone out there and lived your life with jobs and crime and financial instability, you have no idea what it’s really like for the average American.

And yet, these out-of-touch people are the ones screaming the loudest that only they know what is right for America.

And that’s where the Dunning-Kruger effect comes into play.

Back in 1999, social psychologists David Dunning and Justin Kruger of Cornell University performed tests on some subjects and discovered that in many cases, the lower the performance of a subject, the higher their confidence was that they had done well. They published their findings in a paper entitled, “Unskilled and Unaware of It: How Difficulties in Recognizing One’s Own Incompetence Lead to Inflated Self-Assessments.”

In an article by David Dunning called “We Are All Confident Idiots,” he wrote of his studies:

In 1999, in the Journal of Personality and Social Psychology, my then graduate student Justin Kruger and I published a paper that documented how, in many areas of life, incompetent people do not recognize—scratch that, cannot recognize—just how incompetent they are, a phenomenon that has come to be known as the Dunning-Kruger effect. Logic itself almost demands this lack of self-insight: For poor performers to recognize their ineptitude would require them to possess the very expertise they lack. To know how skilled or unskilled you are at using the rules of grammar, for instance, you must have a good working knowledge of those rules, an impossibility among the incompetent. Poor performers—and we are all poor performers at some things—fail to see the flaws in their thinking or the answers they lack.

What’s curious is that, in many cases, incompetence does not leave people disoriented, perplexed, or cautious. Instead, the incompetent are often blessed with an inappropriate confidence, buoyed by something that feels to them like knowledge.

This isn’t just an armchair theory. A whole battery of studies conducted by myself and others have confirmed that people who don’t know much about a given set of cognitive, technical, or social skills tend to grossly overestimate their prowess and performance, whether it’s grammar, emotional intelligence, logical reasoning, firearm care and safety, debating, or financial knowledge. College students who hand in exams that will earn them Ds and Fs tend to think their efforts will be worthy of far higher grades; low-performing chess players, bridge players, and medical students, and elderly people applying for a renewed driver’s license, similarly overestimate their competence by a long shot. (source)

And the way Dunning applies this to politics vividly demonstrates why we have the polarization we’re currently experiencing in the US.

Some of our most stubborn misbeliefs arise not from primitive childlike intuitions or careless category errors, but from the very values and philosophies that define who we are as individuals. Each of us possesses certain foundational beliefs—narratives about the self, ideas about the social order—that essentially cannot be violated: To contradict them would call into question our very self-worth. As such, these views demand fealty from other opinions. And any information that we glean from the world is amended, distorted, diminished, or forgotten in order to make sure that these sacrosanct beliefs remain whole and unharmed…

…Political and ideological beliefs, too, often cross over into the realm of the sacrosanct. The anthropological theory of cultural cognition suggests that people everywhere tend to sort ideologically into cultural worldviews diverging along a couple of axes: They are either individualist (favoring autonomy, freedom, and self-reliance) or communitarian (giving more weight to benefits and costs borne by the entire community); and they are either hierarchist (favoring the distribution of social duties and resources along a fixed ranking of status) or egalitarian (dismissing the very idea of ranking people according to status). According to the theory of cultural cognition, humans process information in a way that not only reflects these organizing principles, but also reinforces them. These ideological anchor points can have a profound and wide-ranging impact on what people believe, and even on what they “know” to be true.

It is perhaps not so surprising to hear that facts, logic, and knowledge can be bent to accord with a person’s subjective worldview; after all, we accuse our political opponents of this kind of “motivated reasoning” all the time. But the extent of this bending can be remarkable. In ongoing work with the political scientist Peter Enns, my lab has found that a person’s politics can warp other sets of logical or factual beliefs so much that they come into direct contradiction with one another. (source)

Sacrosanct ideological commitments can also drive us to develop quick, intense opinions on topics we know virtually nothing about. (source)

This isn’t just about gun control, though.

This article isn’t just about the hot-button topic of gun control. It’s about how we’re living our everyday lives.

Here’s an example: People either love President Trump so much they are unwilling to see any wrongdoing or they despise him to the point that they are unwilling to recognize any right-doing. Most people’s analyses of the actions of the President are completely warped by their sacrosanct ideologies of whether he is “good” or “bad.” They don’t weigh the merits of the actions – instead, they judge them from a place of deeply committed cognitive bias.

The same thing is true for many topics:

All of us – myself included – can look at the list above and immediately say whether we are for or against these things, and what our specific belief is – but do we honestly know the details of these topics? Are our opinions sourced from cognitive bias or fact?

I have biases. You have them. We all do. However, the ability to recognize your own cognitive bias and not useit as “evidence” in a debate is the gold standard of intelligence.

This isn’t something that is going to change.

It’s completely normal for us to base our opinions on our own moral beliefs. As Dunning wrote, we are, at heart, either individualist or communitarian, hierchist or egalitarian. These are core attributes that would be difficult, if not impossible, to change.

But what we CAN do is make a conscious effort to catch ourselves when we make rapid judgment calls without the facts. We can educate ourselves on both sides of an issue and make an effort to use facts instead of feelings in our arguments.

What we CANNOT do is expect everyone to play by these rules. But that’s okay because by understanding how an opposing view was developed, we can use that to fuel our own arguments. We can call out the cognitive biases. What we can’t expect is for facts to change their deeply held beliefs, no matter how ignorant those beliefs might be.

We can correct the lack of information, but we can’t really expect someone with a confident, sacrosanct opinion to change their minds. They’ll hold on to a belief even after it is proven factually incorrect because, as Dunning said, “We are all confident idiots.” Remember, facts have nothing to do with why they have their points of view.

The good news is that there are folks in the middle, who may not have a deeply held opinion on hot-button topics. These are the folks who can be reached by logic and facts.  It’s nearly impossible to battle confident ignorance, but with facts, you can influence people who are undecided.

If you ask me what is going to be the end of our civilization, the rampant epidemic of Dunning-Kruger seems to be the most likely cause. Let’s not be guilty of this confident ignorance ourselves. Let’s vow to inoculate ourselves with facts instead of enabling ourselves with emotional biases.