It’s Upside-Down-and-Backwards Week in the News 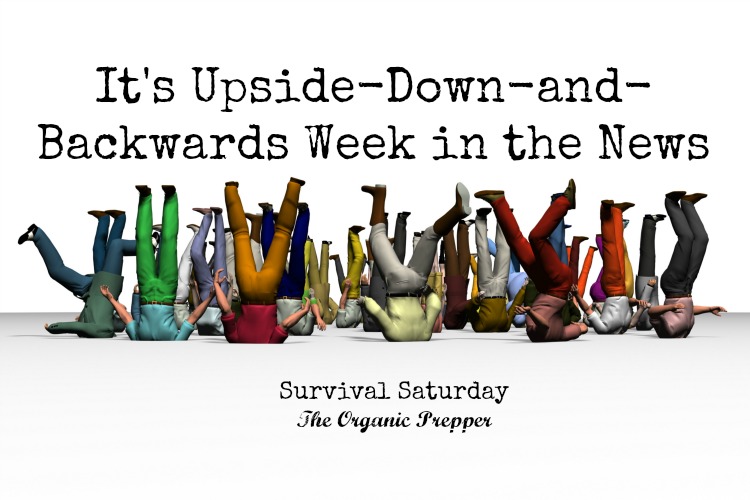 This week on Survival Saturday, it’s apparently upside-down-and-backwards week. A hate group got a peace prize, the Bilderbergers plan to save the world, and Kathy Griffin is being “bullied” by the Trump family.

Bilderbergers will save the world for our own good.

If you aren’t familiar with the Bilderberg group, here’s the rundown:

It is an annual meeting of a bunch of political and financial elites from around the world, where, rumor has it, they choose leaders and create the direction of governments. Many people in the know believe that the group is ever pushing us toward a one-world government that would result in little more than slavery for 99% of us and even greater wealth and power for the 1%.

Here is how Bilderberg describes itself:

Founded in 1954, the Bilderberg Meeting is an annual conference designed to foster dialogue between Europe and North America. Every year, between 120-140 political leaders and experts from industry, finance, academia and the media are invited to take part in the conference. About two thirds of the participants come from Europe and the rest from North America; approximately a quarter from politics and government and the rest from other fields.

The conference is a forum for informal discussions about major issues facing the world. The meetings are held under the Chatham House Rule, which states that participants are free to use the information received, but neither the identity nor the affiliation of the speaker(s) nor any other participant may be revealed.

Thanks to the private nature of the meeting, the participants are not bound by the conventions of their office or by pre-agreed positions. As such, they can take time to listen, reflect and gather insights. There is no desired outcome, no minutes are taken and no report is written. (source)

Don’t you just love it when a bunch of rich people secretly decide your future?

Here’s the list of this year’s confirmed attendees, also known as a list of people you should never, ever trust to have our best interests at heart.

This year, the meeting is being held at the Westfields Marriot in Chantilly, Virginia, and the number one topic for discussion is apparently President Donald Trump. Here’s the agenda, from a Bilderberg press release:

You know it’s upside-down-and-backwards day when a group responsible for much of the racial animosity in the United States today is awarded a prize for peace. In fact, you have to look at the source to see if it’s one of those annoying satire sites.

Every year the Sydney Peace Foundation bestows their Global Peace Prize on extraordinary people who advocate for “true and lasting peace” by ending “war and violent conflict” through addressing “deep injustices and structural inequality.”

But this year the award is taking a different direction, and rather than being given to a single person, it is being awarded to an entire movement for the first time.

And the winner of the 2017 Global Peace Prize goes to…

Slavo continued with a quote from Louder With Crowder:

It’s like people don’t have internet access. Memories. Basic motor functions. If they did, they’d be able to use the digits sticking out of their hands to peck a few letters into The Google. Just to verify if Black Lives Matter is worthy of an award bestowment. Like a kind of “vetting” process, if you will. Since the Sydney Peace Foundation lacks finger privilege, I did the search for them.

If this is what the Sydney Peace Foundation considers champions of peace, I’d hate to see what they think war is.

Poor Kathy Griffin is a victim of the Trump family of bullies.

I wasn’t really that surprised to see the graphic image of so-called “comedian” Kathy Griffin posing as though she had beheaded President Donald Trump. It really just goes along with the kind of person she has presented herself to be.

And whether people like Trump or hate him, most of the internet was united in that Griffin’s photo was in very poor taste.

She issued an apology when her liberal friends told her that it wasn’t cool.

But then she held a press conference and backtracked the whole thing, with the accusation that the Trump family was “bullying” her and trying to “break” her.

This is coming from a grown-a$$ woman who as recently as December said she was “going after” 11-year-old Barron Trump. That’s right. The adult who threatened to give a “beat down” to a little boy is now crying that she’s being bullied.

Here’s what she said in her December interview:

“…So I’m happy to deliver beat down to Donald Trump — and also to Barron. You know a lot of comics are going to go hard for Donald, my edge is that I’ll go direct for Barron. I’m going to get in ahead of the game.” (source)

Of course, when the shoe is on the other foot, it’s a whole new ballgame.

Here’s what she weepingly said in her “I am the victim here” press conference yesterday (accompanied by her “victim’s rights attorney” Lisa Bloom:

In a news conference on Friday, Griffin’s attorney Lisa Bloom accused Trump and his family of “using their power to target her.”

“If you don’t stand up, you get run over,” Griffin said. “What’s happening to me has never happened in this great country. A sitting president of the U.S. … is personally trying to ruin my life forever.”

Griffin addressed the backlash that followed the photo being published on Tuesday, telling reporters her career is over after she says the Trump family systematically “mobilized their armies” against her.

And some more highlights:

And from attorney Lisa Bloom:

Kathy Griffin should probably shut up before she gets even further behind than she already is. Here’s the entire delusional debacle if you want to listen to half an hour of whining victimhood and virtue-signalling.

This week there is some good news from the self-reliance front.

The response to the government of Oregon threatening to spray the organic farms of Azure Standard with toxic pesticides was so great that the spraying was halted and a public meeting was called. And because of the power of the public outcry, the farm has been saved. Here’s a video from Azure Standard:

Here, you can find an FAQ from Azure that provides more details about the issue that started the whole kerfuffle.

A more recent update on the Azure Facebook page outlined the weed control measures that they were taking at the behest of the county in order to keep the glyphosate away from their farm:

Azure Farms is hard at work rod weeding the organic wheat fields in Sherman County. This past week, the farm obtained some Suppress organic herbicide to use on the Canadian thistle weeds. They also ordered a 30% acetic acid solution to use on the noxious weeds. While the weeds most likely will grow back, they won’t have time to go to seed before the ground is tilled after harvest, which is what the ordinance states as the requirement. Meanwhile, Rod Asher (Sherman County’s Weed District Director) met with the Azure Farm management team recently to discuss the Weed Control Agreement as Azure Farms implements their detailed weed control plan. (source)

Just think what we could achieve if we united on other matters like we did this one.

I didn’t get a lot of writing done this week. My daughter had surgery to removed 4 badly impacted wisdom teeth, so we’ve been hanging out and eating soft things together.

Better late than never, I’m finally getting my garden in this weekend as soon as the rototiller guy finishes up. I’ll take some photos of my urban garden and you can see how I tried to follow the beautiful landscaping of the yard while still getting maximum productivity. Since I got a late start this year, I’m going with seedlings that I purchased.

I’m setting up my garden with home canning in mind. (You can check out my new-and-improved canning book here.) 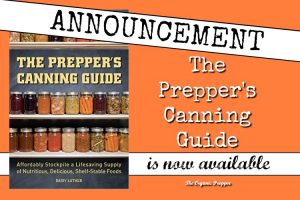