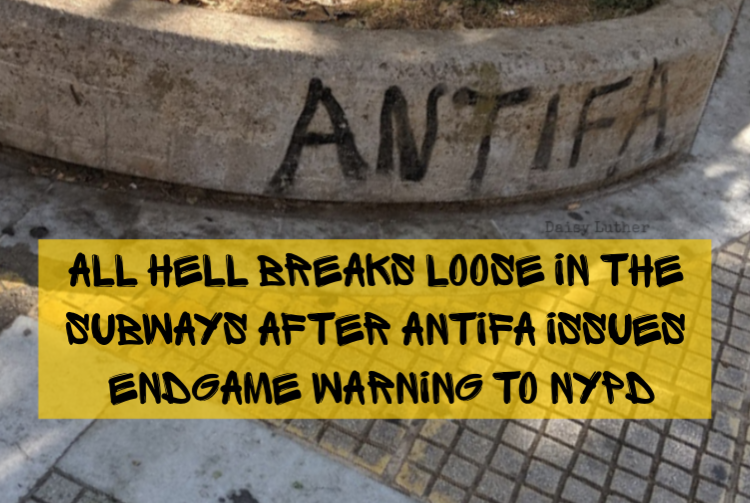 All hell has broken loose in the New York City subway system today.

With both sides issuing their own “End-all/Endgame” warnings, the NYPD planning for a massive Antifa anti-police rally today, January 31, 2020.

Days earlier, an Antifa-backed social media account shared a video of three masked individuals accompanied by a tweet that read: “The streets are ours. The trains our ours. The walls are ours. This moment is ours.”

The minute-long video showing individuals vandalizing public property and jumping subway turnstiles, calls for supporters of the group to “meet up” and rally against law enforcement and transit fares.

“We encourage you to link up with your friends, your family, and think of the ways you can move in affinity to build and f— s— up on J31 all day long,” an unidentified individual said, referencing Friday’s date. (source)

In response to a warning issued by Antifa, the NYCPBA (New York City Police Benevolent Association issued one of their own.

“New Yorkers should pay close attention: this is true endgame of the anti-police movement, and end of all policing and destruction of public order. Our members have spent their careers — and in some cases giving their lives — to bring public safety back to NYC. We can’t go backwards.” (source)

Coupled with their official statement was the video of members of Antifa, clouded by half-face masks, hoodies, and distorted voices, encouraging people to link up with their friends, their family, and figure out ways to “f*** s*** up today… all day long“, calling today “J31”. (emphasis mine)

The streets are ours. The trains our ours. The walls are ours. This moment is ours. How will you and your crew build and fuck shit up for #FTP3 on #J31 (THIS FRIDAY)? Issa mothafuckin' movement. pic.twitter.com/CoEjRSvmDX

Then, one hour ago, New York City Police Department Chief of Department posted on twitter that Antifa was “calling for their supporters to gather at locations where they will attempt to disrupt public transportation, cause disorder & physically assault police officers” “Please be vigilant, back each other up & always stay safe.”

.@NYPDChiefofDept said "…calling for their supporters to gather at locations where they will attempt to disrupt public transportation, cause disorder & physically assault police officers"

"Please be vigilant, back each other other up & always stay safe"https://t.co/iePRBJDPpT

Who the heck is Antifa?

“The Antifa movement is composed of left-wing, autonomous, militant anti-fascist groups and individuals in the United States. The principal feature of Antifa groups is their use of direct action, with conflicts occurring both online and in real life.” But the short definition is Antifa is against everything they consider to be alt-right. While they call themselves antifascists, they are, in fact, everything but. They dress in what is called “Blac Bloc“, are known to be violent, both in thought and action, and are systematically creating groups and attacking anything they disagree with across the United States. (source)

In November 2019, journalist Andy Ngo, experienced a “terrifying” Halloween incident in which a group of men tried to force their way into his home wearing printed masks of his own face.

“These 6 individuals wearing print-out masks of my face approached my family’s home last night, repeatedly rang doorbell, pounded on window, recorded footage of property & gestured at cameras. There were no candy bags. This follows their doxing of my elderly mom’s small business.” (source)

Ngo said he wanted to point out this is only the second violent Antifa criminal across the United States to face actual prison time; with the first being a militant in New York who was sentenced to 18 months.

Where will the protest take place?

Antifa is expected to face-off against New York City Police Officers (the largest police force in the United States), at 5 pm est at Grand Central Station. But not only is this a protest against NYC Police, but also a protest against train fares. This all comes one week after NYC swears in 500 new police officers to protect the transit, railroad, and metro north. Decolonize This Place posted on Facebook that adding the officers was ‘a declaration of war against our communities.”

“That money should not be invested in the harassing and brutalizing of Black and brown folks. It should go toward making the MTA free, well maintained, and accessible to all.” (source)

There are already reports of vandalism, people jumping turnstiles, and gluing turnstiles shut so people can’t use their MetroCards.

How do we prepare for violent events like this?

Stay away. For many, that’s not possible, as they have to commute to and from, work hear, live near, or have to travel through the affected area(s).  If you can’t stay home and/or safely away from the protest(s), make sure you have your preps in your EDC or a travel bag.

Remember to be the gray man at all times. Keep a map on you for additional routes out of harm and if at all possible try not to go alone. Also, remember that being caught in something like this is probably not the time to stand your ground but to get away, so try to have decent running shoes with you and some water. It’s for times such as these that we should be in as good a shape as possible.

Currently, as I’m writing this, some of the turnstiles are apparently open.

For more information on Antifa:

Tips for dealing with Civil Unrest/Riots

Sandra is a wife of 38 years, a mother of 3 awesome grown children, a published artist, photographer, fellow prepper, and animal advocate. She is a strong proponent of the Second Amendment, an avid gun owner, a woman of faith, and values honesty and loyalty above all else.