What’s REALLY Behind the Civil Unrest in Chile? 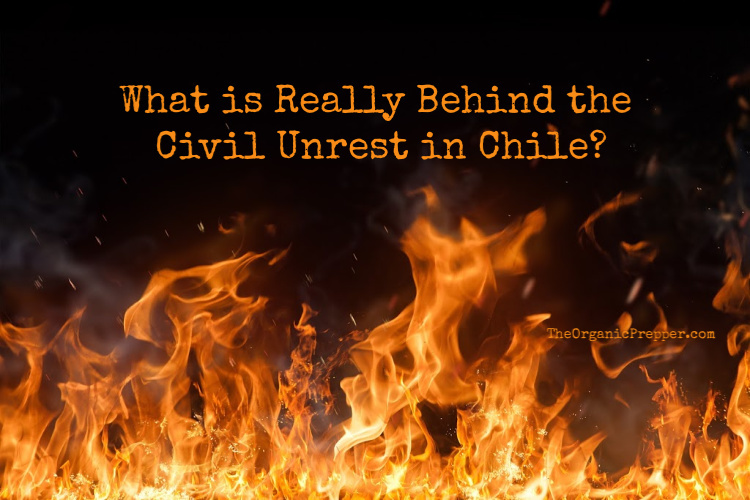 I am going to do a special effort to avoid giving this article a political twist. Despite being the world geopolitics the main responsible behind the fire that consumes Santiago, the Chilean capital.

One of my friends there is not responding since last Friday 18, in any social media. We don´t know what has happened to him. However, some other people have reported that the level of violence has been something out of any measurable scale. The level of the organization they have is AWESOME. (I´ve seen quite a few videos that are NOT in YT, trust me, circulating in other social media, too graphic to describe or publish) of the terrorists (I refuse to call them protestors).

This is by itself already extremely concerning. The turmoil in 1989 known as “El Caracazo” corresponded exactly with this scheme. They tried to make it look like “a popular uprising against an oppressive system that was starving the poor people”…but trust me, nor in Chile nor in Peru there is a lack of food, thank God. Chile has one of the higher per capita incomes of the entire region. Maybe some level of discomfort because of the price increase in public transport was to be expected; but after seeing foreigners responsible for the massacre in Venezuela mocking of what had happened, saying that “it was just a breeze, now wait for the hurricane”…Come on, people. It´s on the wall. They have their hands in this Chilean thing down to the shoulder.

Some of the things happening in Chile don’t make sense.

Someone is organizing those vagrants. There is someone behind providing drugs. Weapons. Someone telling when to attack what. This is not a spontaneous protest. I am just a civilian, and I can feel and smell the military tactics in every target destroyed. I watched videos where, in a coordinated way, 9 guys surround a car – 3 each side, 2 behind, one in front. Why just one? Because he will have space to get off the way if the driver takes off and tries to run him over, the most predictable course of action. I watched another one from Ecuador, where someone is filming JUST BEHIND a young man that gets a shot in the middle of the forehead. At the exact minute. It´s a miracle that a second bullet, (following shot, it´s called? couldn´t say, I’m no shooter) did not hit the guy filming. Too many coincidences. All of the assault teams with their faces covered. Santiago had plenty of time without this kind of turmoil. This was an explosion, a totally unexpected reaction.

There´s something happening, and in our modern, complex world we can´t rest assured things are unrelated. Attacks to refineries and oil production facilities, 3 in a few days. Iran barking loud. This extremely out of place violence in one of the most developed economies of South America.

The situation is as follows:

Who is really behind the protests?

I´ve read all kinds of articles these last few days before sitting down to write this. But the approach my gut instinct, my own reasoning and the lessons of history tells me is not exactly out in the open…yet. Just a few Venezuelan journalists, and maybe a Cuban or Argentinian here and others there have been fair enough to see the real hidden purpose behind all of this.

Just for you to know: the leftist platform sympathizers in Chile are not small. Most of the migrants we found in Venezuela in the 90s were escaping the prosecution because they were leftists. Just read about Allende and his “ideas” about how the country should be governed back then. They would have become a strategic beachhead in the South. For those who don´t know about the long history of Cuba stirring societies and in the incitation of “revolutions” all over the place, just remember the mess created by the criminals when the Mariel jail was emptied and sent to Miami. I always asked myself what the heck Cuba had to do with Angola and “stretching bonds of solidarity and cooperation in all aspects”.

Nice words, indeed. But just look at the map. Why not Uganda? Or Kenia? Or Tanzania? Because of their need for strategic positioning. Their plan (and this is my own inspiration and deduction please forgive this if I am wrong) surely included to stir South Africa, a country with huge mineral resources. My bloodline comes from Boers, so I know this was a possibility. To end with politics, I find deeply unfair that some call pres. Piñera “inept”. Especially when those words come from experts. They should know how hard is to deal with a classroom full of rebel students. Imagine then when rebels have access to Molotovs, and you have a middle class over their 40s and 50s still traumatized by years of an iron fist dictatorship, how hard is to take uniforms to the streets to control those violent terrorists, high on God knows what drugs. I just saw a tweet of someone I follow mentioning she talked with a Chilean history professor, and he mentioned that the young in his country are “addicts to communism and dope”.

In an interesting note, I just learned that protestors have destroyed an uncle Hugo statue in Bolivia. Good. It´s enough of cults to nefarious personalities. If you want to do more complete research, please look for the articles of the Economist Fabio Valentini.

The lootings seem to be spreading. LEOs seem to be overwhelmed, or plain and simple, they were ordered not to intervene. That´s bad. Very bad. It´s the exact same scheme of the 1989 turmoil known as El Caracazo. A couple of years later, that was the excuse for a military coup de tat where Uncle Hugo was mainly responsible. Many people supported that coup because they were promised a “fair” government, “justice” and “prosperity”

The result was the mess we are living in now. The seed was sown those years: militaries trafficking drugs, the takeover of food production, and so on.

Here’s what to do if violent protests occur in your area.

Dear fellows, the wisest action is to hunker down with your gas masks (if you live in downtown of a city being looted), close your windows, and avoid to be in the streets for a few days. Vinegar is a good antidote for tear gas, but surely you knew that already.

Before finishing this article, I stood astonished watching some news about how things are getting stirred…in Panama.

There is no doubt, that the ancient Chinese curse is upon the American Continent.

Thanks for your outstanding support, fellows, I´ve been able to start my treatment with the contributions you kindly have sent, and hopefully will keep it for the next months to come.

May God bless us all.

Do you think protests like the one in Chile will become more widespread? Will they eventually happen in your country (if they aren’t already)? Are you prepared for civil unrest? Please share your thoughts in the comments.