SELCO: Mob Mentality and the TRUTH About Protests 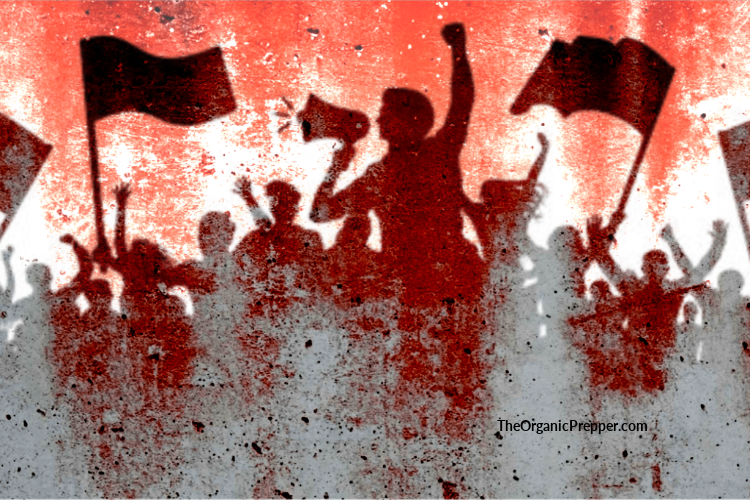 When highly organized force with a mission, resources, a plan, and the will go to finish a task usually there is no reasoning with that force, or explaining that you are trying just to prove some point, or you are just filming, taking selfies or holding a cardboard sign. When that force starts to sweep the street the difference between you (holding cardboard sign) and the guy next to you who is looting is very small for that force.  Sometimes that difference is actually invisible.

Controlling the protest, riots, or mass of people who are on the verge of becoming violent is a very “fluid” task, and once when orders are given you are kinda all the same.

You are all “possible threat” to them, training goes like that. It cannot be different.

The “light em up” video sums up a huge amount of things, all of them important for prepping and survival.

Now, about this video alone the whole article can be written, lamenting and philosophizing about freedom, constitutional rights, maybe even founding fathers (you could do that, not me) and discussing what is freedom about and what you have right to do on your own piece of land (property, house). (Daisy wrote that here.)

I’ll be short about this video, and I’ll just say: “FFS, when you see the whole bunch of armed, organized guys, clearly on the mission, please forget everything and just get the f*ck out of there!” Then a day later, think about how to sue those guys because they forbid you to be on your own property.

It’s a shock to see how fast police got violent.

After watching a whole bunch of videos the last few days there are several conclusions there. The most important one is that people are kinda shocked how violent the police got, and how fast and arbitrarily police go and beat people up, You have to change your mindset to survive in situations like this. Check out my on-demand webinar to talk about my experience with civil unrest and violence.

Folks, in a situation like this, whoever stands in front of the force when order is given is the SAME, and usually will be dealt with same way.

You can try to explain to the cop that you are “just (choose the word)”, but nobody listens in that situation.

I watched this unfold last night. Go to my IG page for the FULL VIDEO and more details (it’s too long for Twitter). Instagram: @Brittmtv pic.twitter.com/ajwWCCtwUJ

Another thing is that most folks also do not realize and understand the mentality of a mob. The word MOB here does not necessarily have to be negative – it’s just a word for a big group of people. So when you find yourself in a big group of people doing something wild, let’s say you are very angry together with a bunch of people because of something, and you are all together breaking display windows, for example, it just might give you a temporary feeling of being protected, because you are in a mass of people. It’s like you are “not visible”.

That feeling can push you more, bit by bit, and you might decide to do more provocative things, more dangerous things, for example, something really threatening. You may not even get it – you maybe not gonna see it how risky it is.

In a large group, individuals often feel the urge to do stuff that they would never do it otherwise. Sometimes those things and actions can be very stupid. You can not ever be prepared what the individual next to you in groups like this can suddenly do, where that action may lead, and, how dangerous it might be.

You can one moment be in a group of perfectly peaceful protesters with signs, and the next second all hell can happen because of the action of one man from the group.

Now take that, and take all above mentioned about an organized force having a task and you should conclude how easily you could get killed by that force.

What did that guy expect to do with the rifle? Start a revolution? Just wanted to look cool in front of his friends? He wanted to take that rifle home? Was he aware of what kind of target he made of himself and how lucky he was?

My opinion is that big mistakes are made when common folks mix up the timing and they act like they are going through some normal time event.

What I am trying to say here is that there are two sides of this event, right and wrong, I think most of the folks would agree that killing a man who is not resisting is murder and that murderers have to be punished. It is clear what is there right and what is wrong.

There is also a “survival” side of the whole story, which says “use common sense”, and very often also says “do not be there”, or simply “stay safe”. The survival side of the story does not have anything to do with right and wrong, It is only about what makes sense.

These events are clearly something that should “switch” you into survival mode, and survival mode is just that: survival.

The truth about protests

I hope these events will calm down soon. But it is possible they are just the “tip of the iceberg”, and it is not something new. I have been involved in several protests, violent ones. I was very active in the protest that sparked (or was the intro) to the war here years ago. Some protests change things, others do not. The fact is that almost all violent protests usually hurt people who are completely innocent and do not have anything to do with the reason for the protest.

Generally speaking, usually, guys who loot have the most to gain during violent protests.

Then again, watching how the situation goes there, and how “both sides” are actually bringing things to higher (and sharper) level hopes that this will calm soon and without new victims pretty much fade away.
Probably it will be worse before it gets better.

Somewhere in the avalanche of videos about protests and violence there, I saw one or two, about Americans, who are practicing their right to carry weapons and defend for shops from looters. I liked that a lot. For me as a “non-American,” it is what the US is about.

Let’s hope stuff like these protests will not be used for taking away that right.