Russia Just Disconnected from the World’s Internet. It May Not Just Be About Censorship. 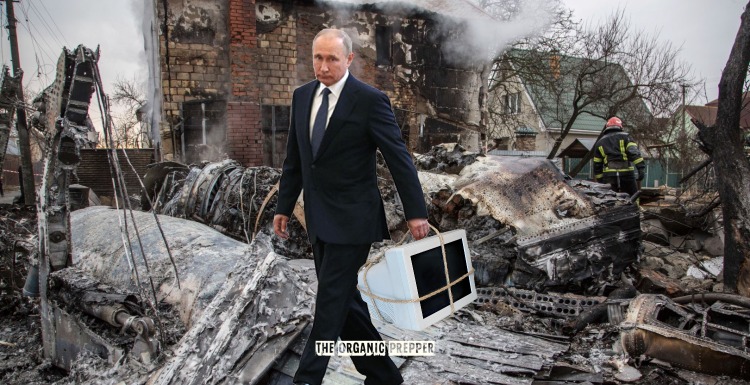 The year 2019 was of historical importance. It was during that year we saw a number of “simulations” take place that mysteriously began to take place within reality just a short time later. Chief of these would be Event 201; a COVID pandemic simulation put on by the Bill and Melinda Gates Foundation. Just a few months after the simulation, we ended up with the events of early 2020.

We also saw Plan A take place in 2019. In this Pentagon-led study, we were shown how NATO expansion into Eastern Europe would lead to global nuclear exchange. Now, here we sit in 2022, a hair’s breadth away from nuclear war.

(Check out our nuclear war survival anthology we just released.)

Russia and its “sovereign internet”

But what you may not know about 2019 was that it was during this year that Vladimir Putin signed into law a “sovereign internet” bill for Russia. This bill gave Moscow the “legal” authority to quarantine Russia’s internet from the rest of the world.

At the time, we were told that this was going to help Russia to deal with threats to Russian internet “in the event it’s disconnected from the World Wide Web.” Russia had apparently been working to this end for years prior to 2019, with tests having been conducted in 2014, which proved that it was possible for Russia to quarantine itself from the rest of the world’s internet.

And now, here in 2022, as the entire world has gone mad, and mainstream media does everything it can to unite the American people against Russia (the very act of which should arouse suspicion. Did the MSM suddenly become reputable? Should you believe everything they tell you now? Should you take what they have to say at face value now?).

Of particular note, however, is the fact that Russia is now looking at putting their “sovereign internet” law into practice.

(Psssst. Hey. You. Yeah, you. Check out our free QUICKSTART Guide on what to eat when the power goes out. It’s probably a good time to do so.)

Russia is withdrawing its internet from the rest of the world.

At the surface level, this is troubling. One can’t help but think of Hitler’s argument that Germany was “hemmed in” and thus, justified in waging an expeditionary war. One may be led to believe that this is an action that will only precede a larger retaliatory action by Russia against the forces of NATO.

Currently, the mainstream media is using this action to criticize Russia’s lack of free speech. This is rather ironic, considering that mainstream media is one of the largest opponents to free speech (Am I the only one who was looking around the past two years?). The MSM championed Russia being pushed out of the global internet, and then, they point the finger and hiss now that Russia has begun the “quarantine” process.

“Look! No free speech!” they yell.

And, indeed, this is true.

All internet traffic in Russia must pass through the Kremlin’s internet censor, Roscomnadzor. But is this really what is going on here, or is there something deeper to look at?

If you’ll remember, the World Economic Forum has repeatedly engaged in simulations looking at the threat of a “cyber pandemic” – and event so bad that the entire internet would be infected. This would absolutely destroy cyberspace, and the simulation Cyber Polygon has been used to justify increased government control within the cyber realm to protect against this apparent global threat.

Are you beginning to see the picture?

Now, watch the below video. Who are the Young Global Leaders?

Ukraine’s Zelensky is a former Young Global Leader as well.

What’s the real reason for the internet quarantine?

Is Russia truly separating from the rest of the world’s internet to crack down on its citizenry as they go to war? Is Russia pulling away from the World Wide Web because they’ve been forced to? Remember, this is something they signed into law in that eventful year 2019. They’ve been preparing for this moment.

Do they know something that we do not? In the event of a global cyber pandemic, if Russia is already “quarantined” from the rest of the world’s internet, are they going to be at risk? What would be the only unaffected country on earth?

Not the ones that have been speaking up against tyranny. Not the ones with truckers and flags. The only unaffected country would be the one with functioning internet.

Make no mistake. Something is afoot. And a cyber pandemic could very well be it.

Why do you think Russia disconnected from the internet?

Do you think it’s just about shutting down free speech? Or do you think something more nefarious is at play? Share your thoughts and theories in the comments.