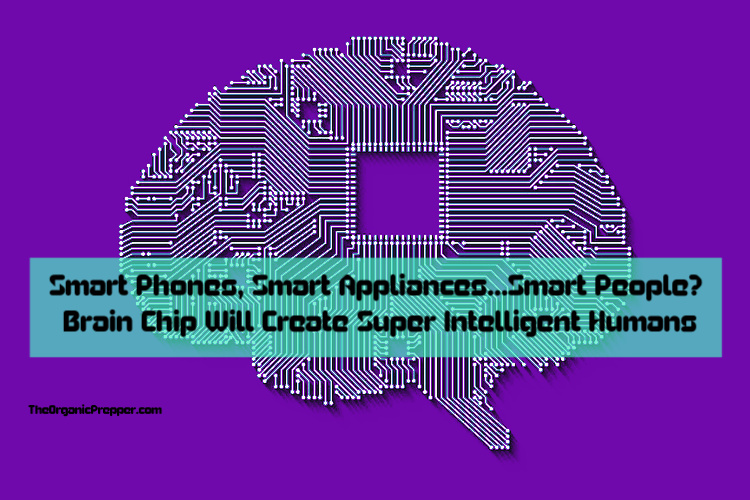 What if you could have a chip installed in your brain that would increase your intelligence? Would you be interested?

While this kind of brain-computer interface technology might sound like something out of a dystopian science fiction novel, scientists are working hard to develop it, and it will likely be available in the near future.

This gives a whole new meaning to the phrase “smart person.”

Scientists are currently developing smart chips for the human brain.

In an interview with CBS Chicago, Northwestern University neuroscientist and business professor Dr. Moran Cerf said he is working on a smart chip for the brain.

“In as little as five years, super smart people could be walking down the street; men and women who’ve paid to increase their intelligence,” the report states.

Dr. Cerf, who said he is “collaborating with Silicon Valley big wigs he’d rather not name,” explained that the smart chip would “Make it so that it has an internet connection and goes to Wikipedia, and when I think this particular thought, it gives me the answer.”

“Everyone is spending a lot of time right now trying to find ways to get things into the brain without drilling a hole in your skull,” Cerf said. “Can you eat something that will actually get to your brain? Can you eat things in parts that will assemble inside your head?” (source)

I don’t know about you, but I find the idea this bit of information troubling: “Everyone is spending a lot of time trying to find new ways to get things into the brain.”

Who is “everyone” and what is their agenda? What kind of “things” do they want to get into our brains, exactly?

What are the ethical consequences of super-intelligent humans?

Super-intelligent humans are undoubtedly coming, but serious questions about the consequences are being raised.

Despite working on the project himself, Cerf acknowledges there are significant ethical concerns associated with this kind of technology:

While is nice that Cerf mentioned those concerns during the short CBS interview, it makes one wonder why he is still interested in pursuing the project.

The average human IQ is 100. People with Cerf’s smart chip implanted in their brains would have an IQ of about 200, which raises an important question: Would those “super intelligent” people even want to interact with “average” humans?

“Are they going to say, ‘Look at this cute human, Stephen Hawking. He can do differential equations in his mind, just like a little baby with 160 IQ points. Isn’t it amazing? So cute. Now let’s put it back in a cage and give it bananas,’” Cerf said. (source)

Of course, Cerf isn’t the only one working on this kind of technology.

How long until Brain-Computer Interfaces become a way of life?

As much as they sound like the stuff of science fiction, brain implants and other types of neural links, such as Brain-Computer Interfaces (BCIs) between the brain and the internet, are rapidly becoming reality.

Last month, we reported that a team of neuro-engineers at Columbia University created a mind-reading system that uses artificial intelligence to translate people’s thoughts into intelligible, recognizable speech.

And, China is already deploying emotional surveillance technology that mines data from the minds of its citizens. “Essentially, they’re data mining by reading their brains,” Meadow Clark explained.

Technology giants are very interested in being able to read minds.

And, as you have likely heard by now, Facebook has been working on building similar products with project often referred to as “Building 8”. The tech giant recently moved its experimental hardware projects (including computer-brain interface, “soft” robotics, and a project to “hear” through a skin-worn device) from Building 8 to a division called Facebook Reality Labs.

While most of us fear the impact of tracking cookies sending data to analytics firms and advertisers, the future could very well consist of our brains being connected to the devices responsible. Instead of measuring affinity for a brand, or displaying relative ads by monitoring your content consumption, the future of security could pull these thoughts directly from your brain itself.

Worse, once the connection is made, there’s little limiting the amount of data we’re sharing, aside from trust in corporate entities not to exploit us. I can almost hear the eye-rolling. And really, is there no one else questioning why Facebook — one of the world’s largest advertising platforms — added this to its 10-year roadmap?

I’ll leave you with another terrifying thought. After we’ve made the connection, we’ll be communicating with our oft-used devices using nothing but our mind. It’s worth being excited about, but cautiously so, and only with answers to significant questions, like: How do I disconnect from AR/VR headsets, fitness trackers, laptops, mobile devices, smart home technology, and my connected car when each is connected to my brain? (source)

Elon Musk – who has previously warned humanity about the possible dangers of artificial intelligence – has been developing a brain-computer interface at Neuralink, a secretive company he founded in July 2016.

In a November 2018 interview, Musk told Axios that his plan is to develop an electrode-to-neuron-based brain-computer interface, or what he called “a chip and a bunch of tiny wires.”

Musk explained that “the long-term aspiration with neural networks would be to achieve a symbiosis with artificial intelligence, and to achieve a democratization of intelligence such that it is not monopolistically held in a purely digital form by governments and large corporations…how do we ensure that the future constitutes the sum of the will of humanity? If we have billions of people with the high-bandwidth link to the A.I. extension of themselves, it would actually make everyone hyper smart.” (source)

Will we be able to opt out and survive?

In a thought-provoking article called Brain implants are happening — are you ready for yours?, humanist and futurist Gerd Leonhard raises many concerns about the possible consequences of BCIs, but perhaps the most terrifying is this:

What I’m worried about the most — and what you need to consider as well — is whether we’ll even have an actual choice to “opt out” if BCIs are implemented. Assuming that the benefits of these technologies are so plentiful, will we be able to find a good job without a BCI? Will we be able to opt out without becoming useless, like someone who insists on banging away on a typewriter or sending telegrams instead of using a computer? (source)

Also troubling is the possibility that we will lose our uniquely human traits:

Similarly, implants may, over time, overcome most of the ethical issues and become the norm in mainstream society — and even lead to legislation that facilitates and legitimizes their use. AI will then work its way into every part of our life and someday we won’t be able to function without it, losing our independence and a lot of what makes us human. (source)

What do you think about BCI technology?

How long do you think it will be until these products will be widely available? Do you think the powers-that-be will ultimately try to force all of humanity to be smart-chipped?