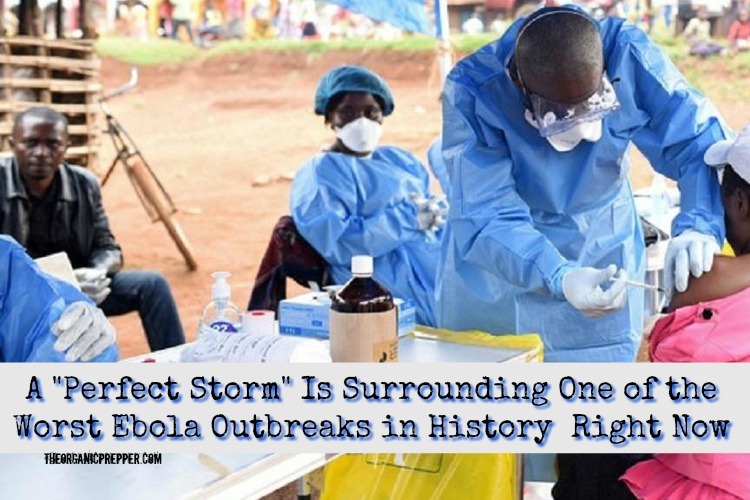 An Ebola outbreak that has been going on in the Democratic Republic of Congo since August is already one of the worst in history – the 7th worst to be precise – and it looks like it may spiral out of control. Peter Salama, WHO Deputy Director-General for Emergency Preparedness and Response, called the situation “a perfect storm.”

Unrest and war in the region combined with community resistance and mistrust of medical personnel are making it difficult for the World Health Organization to get a handle on the outbreak. Dr. Salama said:

“We are now extremely concerned, that several factors may be coming together over the next weeks to months to create a potential perfect storm. A perfect storm of active conflict, limiting our ability to access civilians, distress by segments of the community, already traumatized by decades of conflict and of murder…

…We’ve seen attacks now on August 24, September 3, 9, 11, 16, 21 and most recently and most dramatically September 22 in the city itself of Beni,” he said. He said that Beni was the base for the agency’s base for the “entire operation.” (source)

The outbreak is based in North Kivu, which is on the border of Uganda and Rwanda. Violence has displaced more than a million people in the area, and there have been a number of brutal machete attacks against civilians. Things got so bad that the WHO was forced to cease their operations for an entire week while the Ebola virus spread.

One of the armed groups in DRC which pose a threat to civilians and the international response to Ebola, the ADF – Allied Democratic Forces – has sufficient military capacity to ambush blue helmets from the UN’a Stabilization Mission in DRC (MONUSCO) and government forces – the FARDC.

ADF is an Islamist group that is a serious threat to the Congolese government as well as relief workers.

If WHO and its partners had to leave North Kivu … we would have grave concerns that this outbreak would not be able to be well controlled in the coming weeks or months.” (source)

But it isn’t only violence and war that are factors in this “perfect storm.”

Local traditions are making it the Ebola outbreak more likely to spread.

The local traditions in the Congo are making relief efforts more difficult.

…“We’ve heard this morning, that that ‘ville morte’, which was yesterday, has now been extended right through to Friday of this week,” he said, “which basically means for the UN family, including WHO, a lockdown in Beni. Our operations are in effect suspended.”

…Butembo could also declare a “ville morte” in coming days in sympathy with the people of Beni, he said, potentially increasing the chances of the situation deteriorating rapidly.

“If we do see unsafe burials that can’t be responded to and symptomatic people that can’t be accessed, we can see this situation deteriorating very quickly,” Dr. Salama said.

A “ville morte” is a period of mourning.

Local politicians are manipulating the public so they’re afraid to be treated.

Meanwhile, it’s an election year in the area and local politicians are taking full advantage of this crisis.

In addition to many people’s fear of Ebola, the WHO senior official explained that the situation was being further complicated by local politicians who “exploited and manipulated” them prior to upcoming elections.

Social media reaction to the outbreak was also adding to a “range of conspiracy theories”, Dr Salama said, adding that people have been “actively fleeing” health-workers, including in places where there have been a large number of cases in recent weeks. (source)

“Pockets of resistance” against treatment, fueled by the politicians, are making it difficult to get a handle on new cases. Terrified people are running away from workers into areas that are inaccessible due to security concerns.

We also see a very concerning trend. That resistance, driven by quite natural fear of this terrifying disease, is starting to be exploited by local politicians, and we’re very concerned in the run up to elections, projected for December, that exploitation… will gather momentum and make it very difficult to root out the last cases of Ebola.”

Some people were fleeing into the forest to escape Ebola follow-up treatment and checks, sometimes moving hundreds of kilometers, he said…

…social media posts were conflating Ebola with criticism of the DRC government and the United Nations and “a range of conspiracy theories”, which could put health workers at risk. (source)

This fear of treatment is something we’ve seen numerous times. During the last outbreak, families literally broke into treatment facilities and took their ailing family members who were diagnosed with active Ebola to prayer meetings, where they died in the most contagious stages of the disease.

The disease is now threatening Uganda

Thus far, there are no cases of Ebola in Uganda, but worry has spiked as a case was confirmed near the border at a popular destination for Ugandans.

Tchomia landing site is the closest Democratic Republic of Congo (DRC) landing site to Ugandan districts in the Bunyoro sub-region On Friday, Ituri province vice governor Keta Upar said in a statement that the latest Ebola case had been reported in Tchomia.

Tchomia is one of the busiest fish markets in eastern DRC and attracts several Ugandan businessmen from the landing sites of Butiaba, Walukoba, Kijangi, Kaiso,Sebigoro, Nkondo, Ndaiga, Ntoroko, Kyehoro and Fofo from the districts of Hoima, Buliisa, Kikuube, Ntoroko and Kagadi.

Usually, Ugandan businessmen cross to Tchomia market on a weekly basis – posing a big threat that the Ebola outbreak can easily be brought into the country. Tchoima fish market operates every Thursday. (source)

Ugandan officials have stepped up screening at the border.

Screening of people crossing from DRC for signs and symptoms of Ebola is being conducted at official and unofficial points of entry. Communities have been sensitised about Ebola and are vigilant and reporting any suspicious cases for investigation. (source)

Here’s a map that shows the area and where the case was diagnosed. 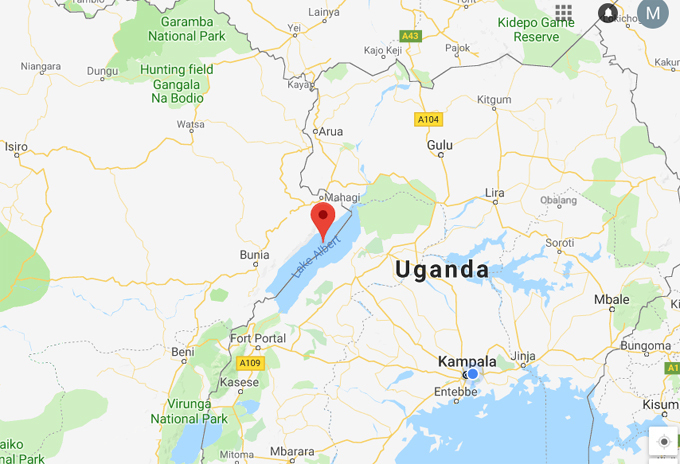 It’s encouraging to see that Uganda is not allowing political correctness to sway them from doing the right thing for their people. We can only hope that the United States will do the same in a time where deadly diseases can spread so easily. Physical check-ups of people from areas where epidemics are out of control should be the norm, not a unique thing that is protested loudly.

At least 100 people have died.

The current outbreak is the 7th largest in history.

The worst-case scenario is that the Ebola virus continues to spread in North Kivu and moves across the border to other countries. If that happens, we could be facing a nightmare like the 2014-15 Ebola epidemic, during which more than 11,000 people died. The only good news: This time we have an effective vaccine. (source)

As of Monday, 80% of Ebola contacts and three suspected cases could not be reached for disease monitoring.