Did It Really Take a Pandemic for People to Realize that Prepping Isn’t Crazy?

My intentions with my articles are never to mock anyone. This article is no exception. On the contrary, I give kudos to those who (finally!) understand and have jumped onto the self-sufficiency wagon. 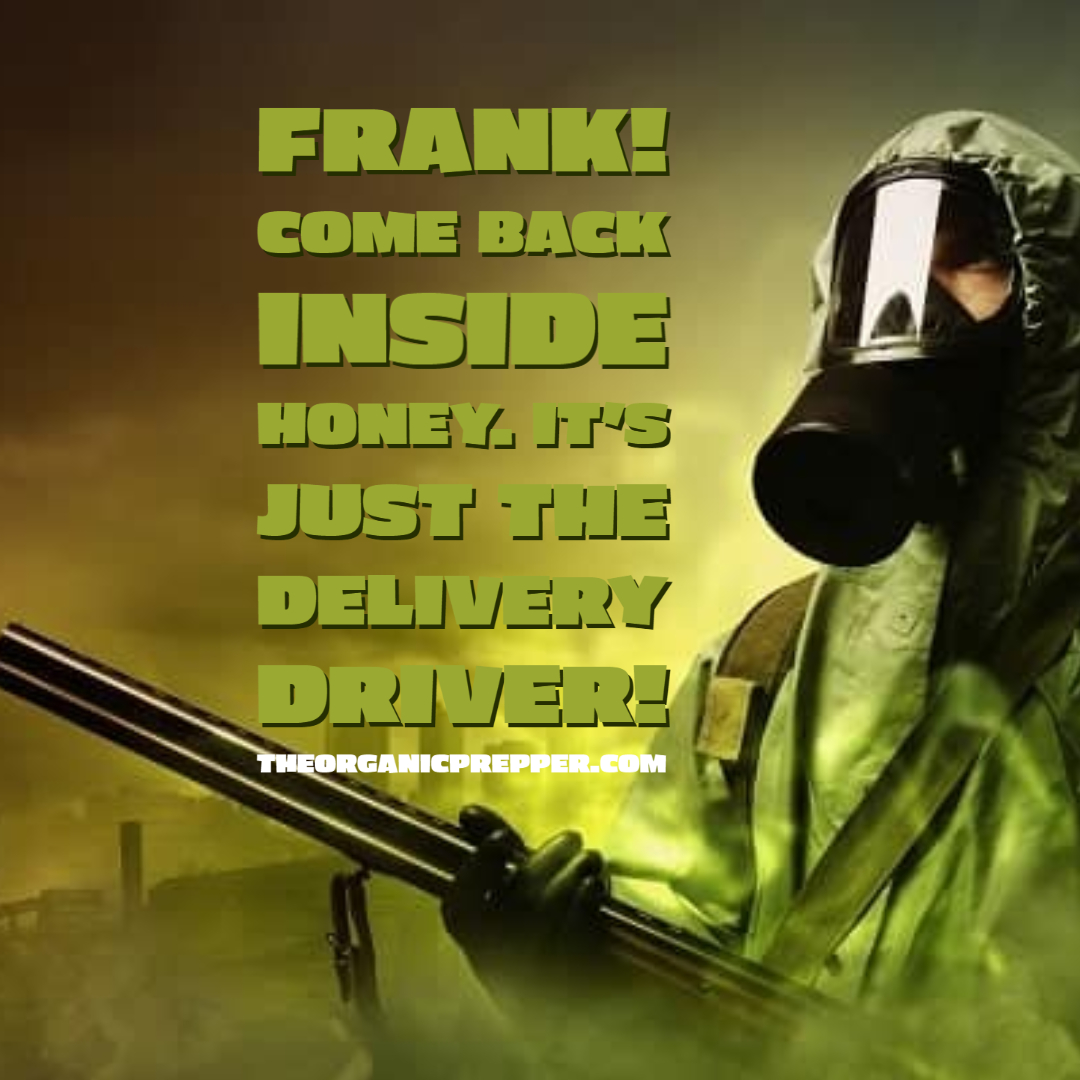 I know many funny memes are going around the prepping community regarding how “happy” some preppers are after finally getting the chance to face “the real thing.” It’s not that easy.

Many of Us Are Deeply Concerned About the Future

Sure we are better prepared to face all the hype and to sail the muddy waters. But, not even the most ignorant prepper (if someone who preps could be labeled as such) would be “happy” to endure any difficulty.

We have not even ended the first quarter of the recession. Yet, most of the world is feeling the devastating effects of the current economic situation.

I find it unnerving how many people had to be continuously bombed for months and months with the need to prepare and understand the real threat. Even though this happened on a worldwide scale!

The most visible indication of sheep getting “prepared” for Doomsday and SHTF is…toilet paper running out worldwide! W.T.F.?

I am sure whoever planned all this stuff has had a good laugh every time they think about this. And yes, I chuckle now too. Can’t avoid it.

Where Would I Be Without Prepping?

My initial prep-steps were taken (two decades ago, maybe more, the mind setup was always there) to overcome problems on an extended motorcycle road trip. Still, at 12 years old, I took my Rudiger Nehberg’s book “Survival” with me on every trip. And the U.S. Army Survival Manual Spanish Edition from those years.

A deep and lasting impression was made on me. However, recent times have caused me to reevaluate how crucial hard cases are to keep gear intact and dry, for instance. And, the need to have the most resistant rope (tightly packed) and a tarp. And how necessary it is to learn how to tie a good knot.

While researching ways to financial freedom (so I could afford to ride all over my beautiful country), I discovered many websites. I found websites on permaculture, motorcycle trip planning, survivalism, B.B.S., and more.

This is where I am now. Grateful to be a prepper.

Having a kid of my own has made it easier to make decisions for essential provisions, like water and power for fan, fridge, freezer, and lights. Now, I carry a good, unbreakable water bottle on me at all times. My boots, perfectly waxed and cleaned, are near the door, and my backpack under the bed ready to go.

Going further with my prepping would mean to get my B.O.L. to the stage I intend to and acquiring a diesel-retrofitted Pinzgauer. It would be a BLAST to run a business transporting people in Venezuela. I could be making good bucks without too much effort.

SARSCov2: What we have experienced so far is not even the real thing.

This pandemic has been an absolute shock for most. The bad news, as far as I see it, it is not even remotely close to being over. Sorry.

I can smell it. I can perceive it. Why is this? Because I have seen the evil behavior of the gangs ruling a country. Chasing families of anyone they consider their enemies. They are the same gang orchestrating all this scenario. They will do anything within reach to achieve their goals. It will not be over until they do so.

Most of those grey back wolves all over likely agree with me: too much noise, too much nonsense. Other diseases were far worse, and the media handling of those diseases was not even close to this shameful parade.

Is the bug dangerous? Sure it is. It was designed to produce a death toll to scare sheep and force non-sheep to stay put. But you can’t, or shouldn’t jump into a crystal bubble. Ahem…especially being 3000km away from the place chosen to set up your B.O.L. And…the borders are closed.

All that is left to do now is face it bravely. So far, so good

Regarding the above scenario, I was never terribly nervous or excessively afraid. Yes, I had some bad moments, as usual. Maybe the lack of sun or vitamin C in those days. I couldn’t say. Being unemployed in your own country sucks. Without anyone to ask for help or invite you and your kid to have pasta…well, you get the picture.

I started to check how the media had invaded the entire public attention with the SARSCov2 stuff. Just like you indeed did. I have no T.V., but two stories under me, I could listen 18 hours daily. My neighbor Mr. Hernan has Chief of Artillery ears! Almost every channel barks the same stuff on the disease. Mostly the same recycled material.

Not once did I hear about the M.D. in Moquegua, who started to use Hydroxide to treat it and achieved a healing rate of about 90% or greater. Even though the video was from a T.V. news channel, I received it via my social media.

There were too many inconsistencies, too many shades, too many phrases, and too many M.S.M. rewording: “The New Normal.” (Yuck) There were very few REAL answers and almost no real scientists getting involved and exposing themselves.

I am a “thinker.” The bad thing is I am too broke and too busy trying to survive to hire some air time and make public my hypothesis for the greater good. The evidence is plentiful. We have sites like F.B. covering up and censoring everything they can.

And a racial revolution war in the middle of a deadly pandemic? Give me a break.

I still don’t see many younger people trying to understand what prepping is about. I can’t speak for the U.S.A., but I have people in Spain telling me those who can (usually those working online) are getting low priced properties in faraway little towns. They are doing so in the hopes of getting away from the city hazards, infections included.

But watching them complain about how impossible it is to get a good coffee with vegan milk, or carrot buns made with un-traumatized vegetables, or some other silly stuff modern generations seem to be unable to live with, I think “Oh, Lord! These guys are just at the first step. They will fall on their backsides many times before realizing the need to re-shape themselves to make a decent living these decades to come.”

Related: Teach Your Children Prepping and Survival Skills in a Way They Will Love

What if someone goes ahead with “The Schedule”?

There are worse things to come. Of course, you all know that I only write about these things to inform, not spread fear. By learning, understanding, and assimilating the possible scenarios, we can react quicker and more efficiently.

I had the feeling this was coming, but I imagined we had like 10 more years to prepare. Or even 15, maybe 20 with luck. I would be a senior guy and perhaps wouldn’t survive it. But, I would have left relieved, knowing that my family was prepared.

Silly me…caught with my pants down in the worst economic position in life I’ve ever had and with a small child to support.

I have made investments toward early retirement, in the form of a small patch of land and some improvements to a cement hutch my father built over 35 years ago. The hutch could quite possibly be where we are headed for a while until the economy recovers.

Related:  3 Compelling Reasons Preppers Should Buy a Patch of Land

When I see people waiting for the “New Normal,” I get uneasy. (Double yuck.) Something is happening right before our eyes, and people are willing to just get the shot and continue as if nothing happened?

I had hoped to have another child before closing up the factory. Now? I am seriously thinking about a vasectomy after all this!

Sheep continue to be asleep.

That’s a potential problem for all of us. A lot of people have opened their eyes, I feel. But, many have become numb to it all. Maybe we should let Darwin’s law do what it does best and prepare to hunker down as deep as possible once the real thing hits.

Dire predictions aside, time could prove my wildest fantasies (or nightmares) to be a picnic day. The universe went all Jumanji. I was waiting for the giant mosquitoes and the flooding with alligators included in the building’s lower stories. I even dreamt of those dang monkeys stealing my bike!

If you even started thinking about prepping before the pandemic, you are way ahead of the game. With great satisfaction, I give myself kudos! I escaped my country’s collapse, and I have been slowly crawling out of this rare disease plot practically unharmed.

It’s not over. We have a tyranny yet to overthrow. That is if the bio-weapon doesn’t prey on them first.

Stay tuned, and be safe!

How Anyone, Anywhere, Can Homestead