Deja Vu: Is the Oroville Spillway About to Fail Just Two Years After Near-Disastrous Evacuation? 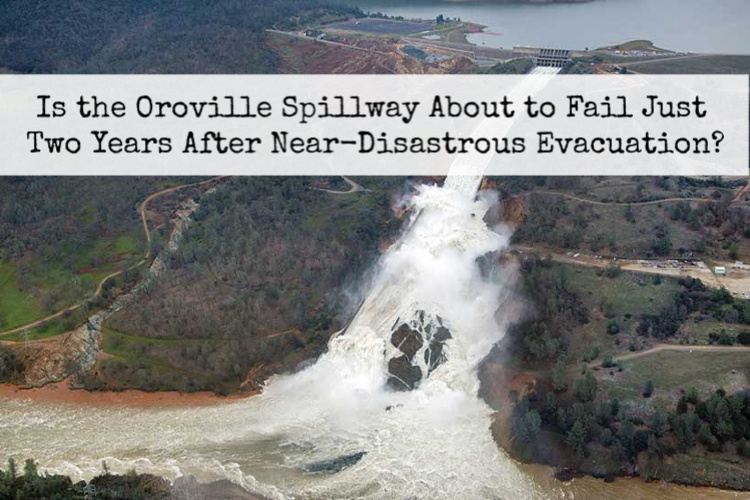 It may be hard to believe but only two years after a near-disastrous last-minute evacuation, the Oroville Spillway could be on the verge of failure again. A major piece of infrastructure in Northern California, the spillway has not been well-maintained despite continuously increasing taxes for that purpose.

And despite a very near miss two years ago, it looks like we’re seeing a replay of those same events.

According to a report on The Common Sense Show with Dave Hodges, some folks downhill from the dam have already evacuated due to the strong possibility of imminent failure. Hodges is issuing a warning to people in the path of the looming disaster. He wrote:

I asked Paul Preston, “How close is the dam to failing?” Preston replied “It could go by this weekend”.. His comments, in part, are based upon the dire weather forecast in which intense rainfall is forecasted between Wednesday May 15 and Sunday, May 19th. This is significant because this could greatly add to the inflow and the outflow data which shows an extreme imbalance. And when we consider that the dam is 12 feet from overtopping, the danger multiplies exponentially. When any structure takes on more water, whether it be a ship or a dam, it is going to fail/sink…

…This article is a progress report. However, it is also a warning to the residents in the Central Valley which lie below the Oroville Dam and are in the direct path of the torrent of water that will be released when the dam fails. Some are leaving and some more will undoubtedly leave before it is too late. However, we many unsuspecting potential victims that are oblivious to the present set of conditions. This article is aimed at getting the present state of the Dam in front of as many people in the Central Valley as possible. (source)

Is this warning only an “internet rumor?”

At the same time, local officials are assuring people that there is no danger. The Butte County Sheriff released the following statement on Twitter.

Please take a moment to read the attached statement from Sheriff Kory Honea regarding recent rumors and concerns expressed about the Oroville Dam and it’s spillway. #ButteSheriff pic.twitter.com/S8tRwDLd4F

The Department of Water Resources released a statement explaining why the spillway is not a concern.

DWR is monitoring weather forecasts into the Feather River basin this week, and the impact incoming storms will have on melting snowpack. Forecasts and weather can change rapidly, and DWR will notify the public and media if the main spillway needs to be used to manage reservoir levels. Currently the reservoir is at an elevation of 889 feet and outflows to the Feather River are 9,500 cubic feet per second. DWR is targeting high lake levels through spring and summer in accordance with normal state and federal regulations, which is good news for local recreation and for statewide water supply. (source)

But not so fast – let’s revisit the Department of Water Resources actions the last time the dam was near failure.

The Oroville Spillway almost failed in 2017

Back in 2017, the people of Oroville were in a very similar situation. Nearly 200,000 residents were evacuated due to fears that the main spillway is pending imminent collapse. The emergency spillway isn’t some high tech engineer’s creation – it is just a cleared hill which showed massive erosion when they tested it with a small amount of water.

When drought-stricken California got the equivalent of five years’ worth of rain all at once, crews were left to work frantically around the clock to fix the spillway.

But the mismanagement of funds or the last-minute slipshod repair wasn’t even the worst of the matter. Not by a long shot.

The local government gave only a ONE HOUR warning to local residents.

Of course, the lack of maintenance and mishandled tax dollars are unforgivable, but the lack of warning was even worse.

…the real lesson here isn’t the faulty infrastructure or the mismanagement of funds.

It is the deception of the public and the way that officials will go to great lengths to cover their butts – even if that means giving a warning to the public that could be too late. This isn’t the first time that the government has completely failed in an emergency response to an imminent disaster, and it won’t be the last.

Officials waited until they believed that the disaster was only 60 minutes away to evacuate nearly 200,000 people. (source)

For more than a week, residents expressed their concerns but were basically patted on the head and told not to worry. (Go here for a timeline of the Department of Water Resources’ complete denial of a problem last time around.) Meanwhile, the California Department of Fish and Wildlife evacuated almost all salmon from the Feather River Fish Hatchery but the humans were repeatedly told there was no threat whatsoever.

Until five hours after the announcement of the successful evacuation of the fish.

EMERGENCY EVACUATION ORDER ISSUED: Officials are anticipating a failure of the Auxiliary Spillway at Oroville Dam within the next 60 minutes. (source)

Residents were warned as they were leaving:

“With Lake Oroville filled to the brim, such a collapse could have caused a “30-foot wall of water coming out of the lake,” Cal-Fire incident commander Kevin Lawson said at a Sunday night press conference.” (source)

One estimate suggested that the initial flash flood could reach up to 100 feet in depth, wiping out everything in its path.

People were stuck in long lines at gas stations and then stuck in traffic for hours – up to nine hours to be specific. Imagine if the Spillway had failed while hundreds of thousands of people were stuck in their cars. Imagine the level of death and devastation there would have been.

And all of it would have been due to the fact that someone was covering up careless management.

And here they are again, two years later, facing the same potential disaster.

If you live in an area that would be affected if the Spillway fails, I strongly urge you to evacuate if you can at all before Mother Nature dumps several more inches of rain this weekend. It might be a nice time to go visit family members outside the potential emergency zone. Evacuate keeping in mind that you might never be able to come to your home again. (Get evacuation checklists and whole home inventory checklists in this PDF book.)

Go now so that you aren’t stuck in traffic when disaster strikes. And if you can’t go now because of work or school commitments, at least ensure that your fuel tank is topped up at all times and that you are packed and ready to roll the second an evacuation order is given.

I would not wait for the official evacuation order.

Because if their past performance is anything to go by, it’s pretty clear that you won’t be able to trust local officials to warn you in time.