The Oroville Spillway Disaster: Why You Should NEVER Wait for the Official Evacuation Order 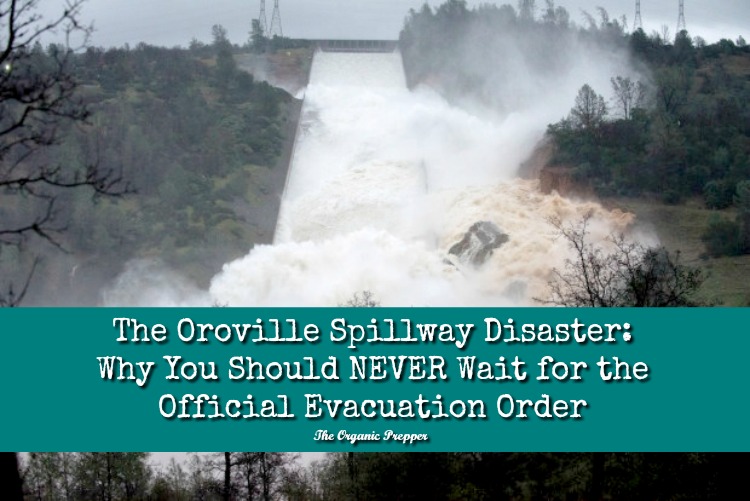 After five years of drought, a new disaster faces Northern California: the imminent collapse of the Oroville Spillway.

Nearly 200,000 people were evacuated last night from areas below the Oroville Dam due to the fear that the main spillway is pending imminent collapse and the emergency spillway is literally, just a cleared hill which showed massive erosion when they tested it with a small amount of water.

(Update: To all of the kind people who asked, my family and I are nowhere near this disaster. We are several hours away and quite far uphill from it. Thank you for your concern.) 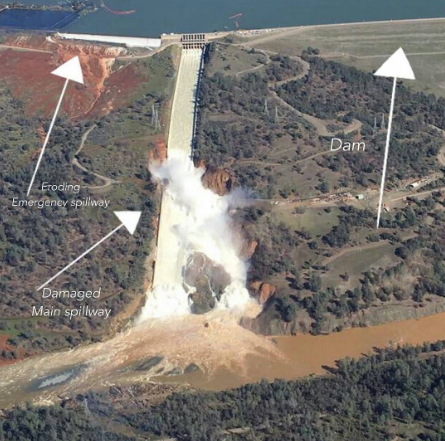 The state has basically gotten all the rain it missed over the past years at once, as three storms called “atmospheric rivers” have unleashed torrential rains that have lasted for days. Another huge rain storm is expected later this week and crews are working frantically around the clock to fix the spillway before more rain falls. This photo shows the damage to the spillway. 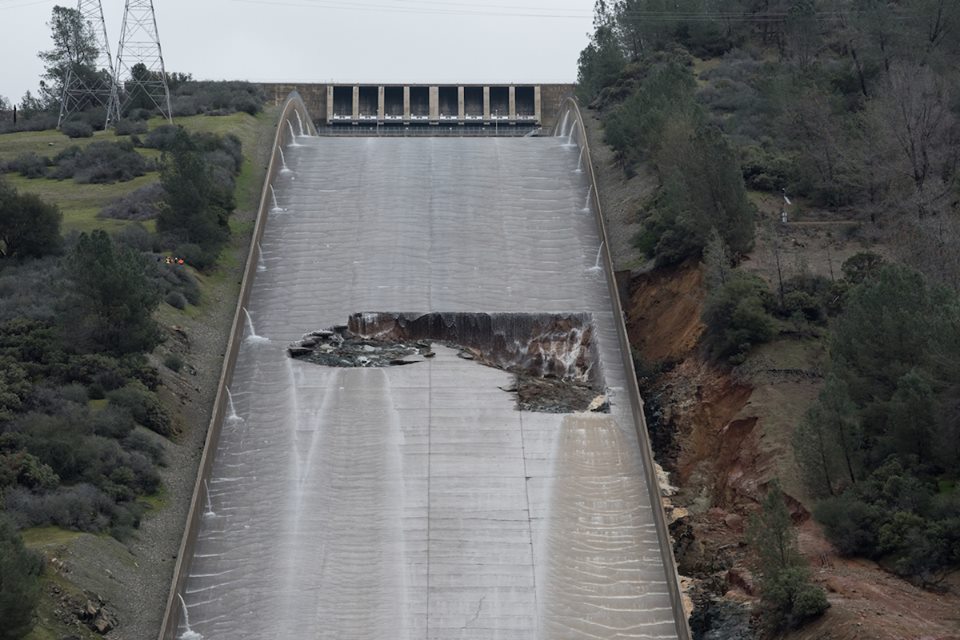 But the real lesson here isn’t the faulty infrastructure or the mismanagement of funds.

It is the deception of the public and the way that officials will go to great lengths to cover their butts – even if that means giving a warning to the public that could be too late. This isn’t the first time that the government has completely failed in an emergency response to an imminent disaster, and it won’t be the last.

Officials waited until they believed that the disaster was only 60 minutes away to evacuate nearly 200,000 people.

The week leading up to the crisis

All week, people have raised concerns about the spillways. But the California Department of Water Resources (DWR) told residents there was nothing to worry about.

Here are the updates from their Facebook page from Feb. 7, when the spillway damage was first discovered, until last night, when failure appeared to be imminent and almost 200,000 people were given minutes to evacuate. Emphasis mine. Note that until the very last post, they were assuring everyone that things were fine.

Five hours after joyfully announcing the successful evacuation of the fish…

This is an evacuation order.

Immediate evacuation from the low levels of Oroville and areas downstream is ordered.

In response to this developing situation, DWR is increasing water releases to 100,000 cubic feet per second.

Immediate evacuation from the low levels of Oroville and areas downstream is ordered.

Needless to say, chaos erupted as unprepared people rushed from their homes, only to sit in long lines at the fuel stations and get stuck in traffic for hours as the routes out of the danger zone became clogged within minutes.

Should the spillway fail, it would result in an uncontrolled release of floodwaters.

6:08pm: #OrovilleDam itself is not compromised at current time. Failure would be on auxiliary spillway. See graphic for details. pic.twitter.com/LSxCwsthxC

“With Lake Oroville filled to the brim, such a collapse could have caused a “30-foot wall of water coming out of the lake,” Cal-Fire incident commander Kevin Lawson said at a Sunday night press conference.” (source)

One estimate suggested that the initial flash flood could reach up to 100 feet in depth, wiping out everything in its path. This tweet shows how quickly the predicted floodwaters would move.

What lessons can preppers learn from this?

From the moment this erosion was spotted, people downstream should have been packing and moving their farm animals, pets, and larger items to higher ground if possible. They should have been preparing for an immediate evacuation, with their vehicles loaded.

You absolutely cannot trust the organization who would be at fault for a disaster of this magnitude to be upfront in warning of their negligence. They’ll be too busy scrambling for a makeshift fix and rescuing the fish to tell you that you are in peril. All you have to do is think about the Flint water crisis or Hurricane Katrina to recall that officials will cover their own butts first and warn people of danger second.

Officials in charge of the Oroville Spillway waited until they believed that the disaster was only 60 minutes away to evacuate nearly 200,000 people.

The bottom line is something that every prepper knows is a fact:

In a disaster, you are completely on your own.

Some helpful links for those affected by this potential disaster:

Emergency Evacuation Checklist for Getting Out Fast

Replacing Documents After a Disaster

Live Updates for the Oroville Spillway

A note for all of the people without compassion, like the ones commenting on Facebook about how Californians deserve this and how funny it is:

One day you may suffer a disaster. And I hope that people are kinder to you than you are to the human beings who are suffering right now.

As well, those who like to paint the entire state with a broad brush should know that Butte County is not a liberal hotbed, as you can see from the official election results here.

And even if they didn’t vote the way you think they should have, wishing ill on other people is a reprehensible way to live. It reflects on you, not the people you are saying cruel things about.

If you are one of the people who think that anyone deserves to lose their homes and everything they own, you should be ashamed of yourselves.

Your smug judgmental attitude and hatred are part of what is wrong with our country today. If you think that you’re being a Christian by wishing ill on Californians, I’m pretty sure this is the opposite of the behavior Jesus recommended.

For those who think this is “Karma” maybe you should remember that Karma works both ways, and one day, you could find yourself the recipient of it.

Maybe you didn’t mean to be cruel. Maybe this post will help you to realize that it isn’t the way you want to behave. I hope so because I think most of us are inherently good people. Sometimes we just don’t think before we speak or type. We can always try to be kinder and more compassionate people going forward.

But if you are steadfast in this mindset, I know what you’re going to say. And go ahead. Feel free to “unlike” my social media, remove me from your bookmarks, and never come to my website again. My comments section and social media accounts will be much better places without you.