Tempers Are Flaring Over Lockdown, Masks, and Money: Is All-Out Civil Unrest About to Erupt? 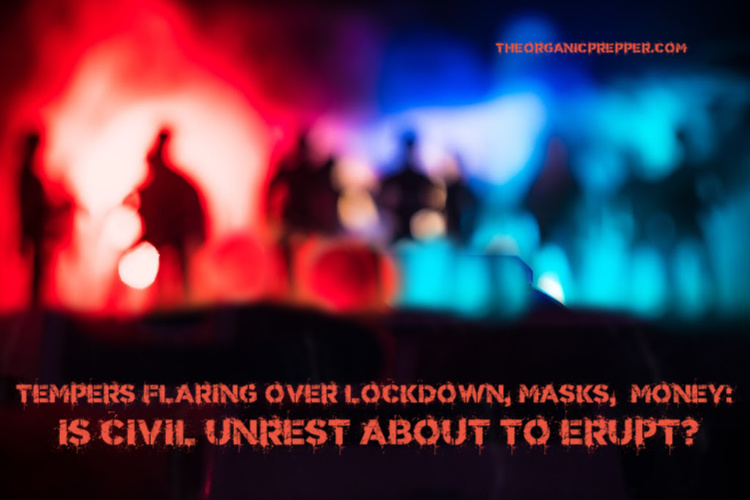 Across the nation, tempers are flaring over the continued lockdowns in many parts of America, and also on the requirement to wear masks in public. I wrote previously about the possibility of civil unrest over the lockdowns, and unfortunately, it appears that’s where we’re headed.

The longer the lockdowns are continued, the more likely it is that we are going to see violence erupt.

People seem unable or unwilling to respect the opinions of others with regard to COVID19, which has affected every family differently. Some are devastated by the loss of or risk to loved ones, while others are struggling to put food on the table and keep a roof over their heads. Others are rightfully concerned about the losses of liberty that we’re seeing. All of these concerns are valid, and not mutually exclusive.

Some violence has already occurred over mask requirements.

Just over the past couple of days, there were several disturbing incidences of violence when people refused to wear face masks in businesses that required it. Whether or not you think that you should be wearing masks, violence toward employees is not the answer. People working in retail just want to keep their jobs, and unfortunately, that sometimes leaves them in the vulnerable position of having to police customers who don’t want to comply with store policies.

A physical fight erupted at a gas station in Decatur, Illinois when a customer refused to don a mask to pay for his fuel. Sgt. Brian Earles with Decatur Police spoke to the press about the incident. It seems that a 59-year-old customer got into a verbal altercation with a 56-year-old cashier when he was trying to pay for gasoline without a mask, as is mandated by the state of Illinois. The customer allegedly shoved the cashier, who said he felt threatened, and the cashier responded by punching the customer in the face. The customer was arrested and charged with battery over the incident.

In Holly Michigan, a Dollar Tree customer refused to follow the posted store policy of wearing a mask. When a young female employee approached him and let him know of the policy he responded by saying, “Here, I will just use this as a mask,” and wiped his face on her sleeve. The customer continued to behave belligerently until he left. The entire incident was caught on store surveillance.

At a Family Dollar store in Flint, Michigan, the most violent response yet occurred when Calvin Munerlyn, a security guard for the store, was shot and killed after he refused to allow a customer’s daughter to come into the store without a mask.

Genesee County Prosecutor David Leyton said Sharmel Teague “began yelling at Munerlyn and spit at him and Munerlyn told her to leave the store and instructed a cashier not to serve her.”

Sharmel left the store. About 20 minutes later, she returned with two men who officials identified as Larry Teague and Ramonyea Bishop. The two men confronted Munerlyn, and Bishop shot Munerlyn in the back of the head, the prosecutor’s office said.

Sharmel Teague and both men have been charged in Munerlyn’s death.

Anti-lockdown protests are spreading across the nation.

A lot of people aren’t formally protesting – they’re simply ignoring restrictions. Parks and beaches have been full of people who are sick of being stuck at home. Police officers are fed up with going out to break up crowds and enforce social distancing.

While some states are beginning to lift lockdowns, others are not. Protesters across the United States are demanding that restrictions be lifted. The Hill reports that protests are taking place in California, Colorado, Delaware, Florida, Illinois, New Jersey, New Mexico, New York, Tennessee, and Washington. There are also protests occurring in Massachusetts, Vermont, and Maine, as well as North Carolina.

Many of the protesters cite the need to go back to work while others say that their concern is liberty. In much of the mainstream media, the protesters are painted as pro-Trump white supremacist gun owners, which is taken right out of the playbook used by Virginia’s governor, Ralph Northam, during the anti-gun control march back in January, when he said that “armed militias were planning to storm the Capitol.” While many of the protesters do lean more toward the right-wing, not all Republicans support the protests. And clearly, not all of the protesters are hate-mongering racists and its disingenuous of the media to promote this biased portrayal.

Counterprotesters have shown up at some of the protests to represent healthcare workers.

Currently, the protests have been peaceful but have raised grave concerns because the protesters are not practicing social distancing or wearing masks. Facebook has banned anti-lockdown protest pages and coordinators. Dr. Deborah Birx, the White House coronavirus response coordinator, is unhappy to see the protests.

“It’s devastatingly worrisome to me personally because if they go home and infect their grandmother or their grandfather who has a co-morbid condition and they have a serious or a very — or an unfortunate outcome, they will feel guilty for the rest of our lives,” said Birx. (source)

The protests are likely to continue until the lockdowns end, and we can probably expect to see greater numbers of protesters the longer the restrictions go on.

A lot of people still don’t have the money they were promised.

Back when the lockdowns began and President Trump announced a “two-week plan” to flatten the curve, a lot of promises were made by the federal government to help people weather the economic disaster caused by shutting down businesses. 30 million Americans have become unemployed since the middle of March.

Unfortunately, many of those promises have not been kept. (For tips on getting through the application processes for Pandemic Unemployment or Payroll Protection loans, go here.) Whether it’s due to antiquated application processes or shady business practices by large banks and publicly held corporations, the money just has not arrived for many people – and those folks are beginning to become desperate. People in many states, including New Jersey,  Maine, and Pennsylvania report they haven’t yet gotten a dime from unemployment. In fact, a whopping 71% of jobless Americans haven’t gotten their unemployment payments from March.  Lines at food banks are literally miles long in some areas. Rents and mortgages are not being paid.

Soon it’s going to bubble over into rage and when it does, we could see unrest and crime like we haven’t seen in this country in centuries.