Is a Dystopian “Social Credit” Program Coming to America? Or Is It Already Here? 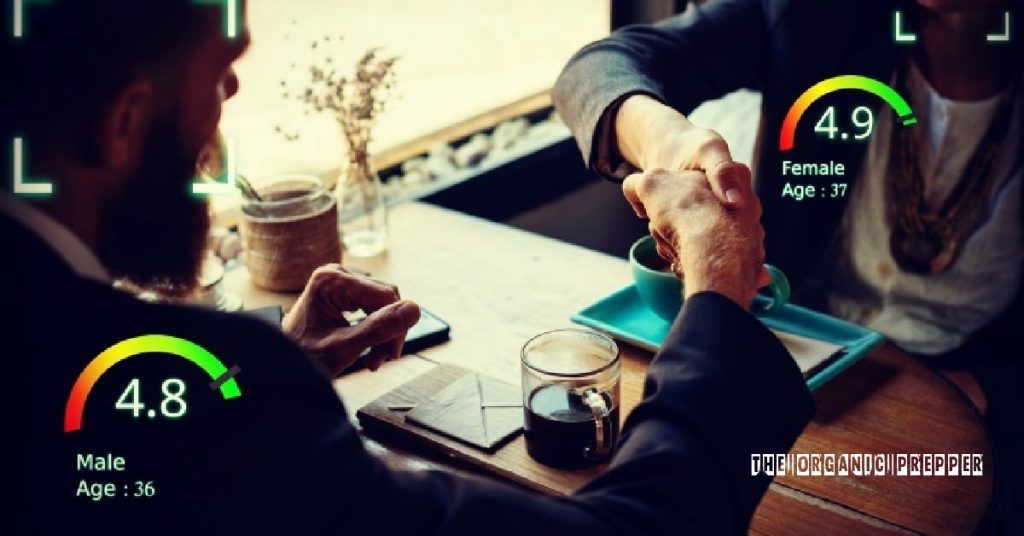 (Sept. 27, 2018) Have you heard about China’s dystopian new “social credit” program? If you haven’t, there’s a terrifying infographic from Bored Panda that I’ll be referencing throughout this article.

The good news is that this is happening in China, where we all know a Communist government has long been crushing freedom for the residents of the nation. You may think this doesn’t affect you because you’re in America, gosh-dang-it, but we’ve seen over and over again how a “great idea” in another country, no matter how dystopian, can spread like a viral contagion.

Here’s some information about data collection in the United States.

We all know that our data is being mined and sold to the highest bidder all over the internet. A while back, I was looking for a new rental for the time that our lease runs out. I got some emails from landlords from Craigslist, made an agreement with one of them, and then the very next day, a utility company that I had never contacted sent me a creepy email reminding me of the length of time ahead I needed to schedule relocating my service.

Everything you do online is scanned and sent to people who will profit. 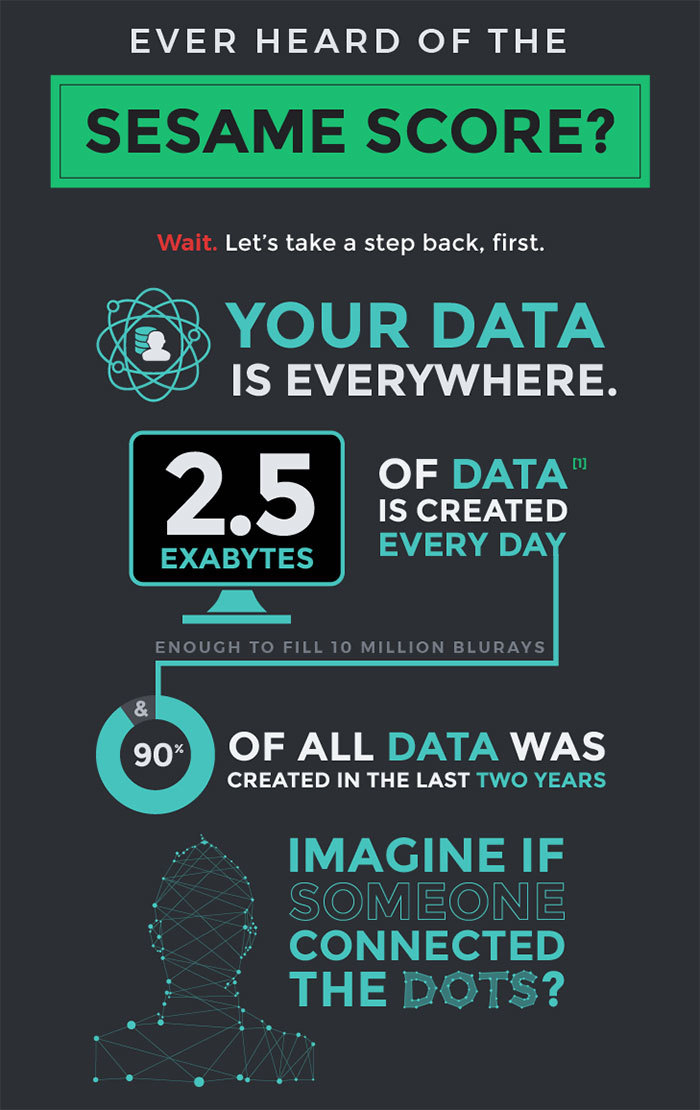 So what if someone on Facebook, Twitter, G-Mail, Yahoo Mail, Outlook, and everyplace else on the internet was collecting every single thing you typed, everything you read, and everything you searched up?

What if all that stuff got combined to create a picture of you, your beliefs, your moral convictions, and the way you think? 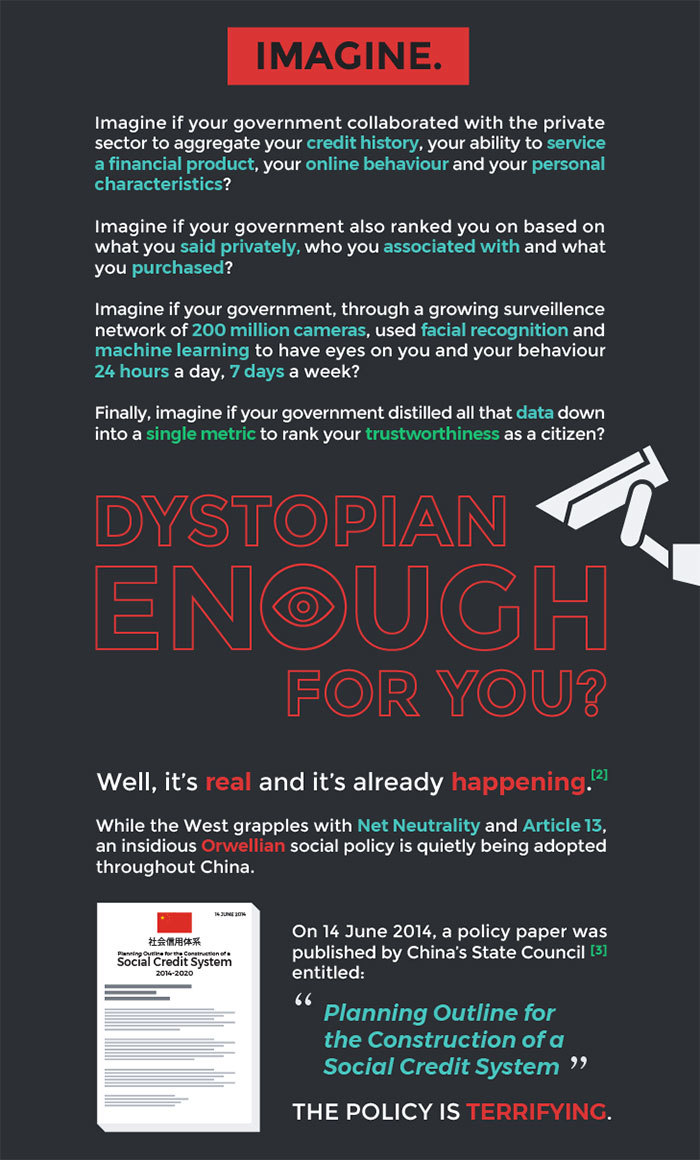 Don’t delude yourself into thinking that this will only be limited to China. This is something that will spread based on its “effectiveness.” Effectiveness at what?” you ask. Effectiveness at predicting your every move, from likeliness to pay a bill or honor a contract, to who you will most likely vote for in the next election.

There’s a reason that Mark Zuckerberg had to go to Congress and sit on a stack of books and testify. It’s because the information he has harvested and sold is so incredibly, horribly detailed. When you read the following infographic, you’ll see where I’m going with this. 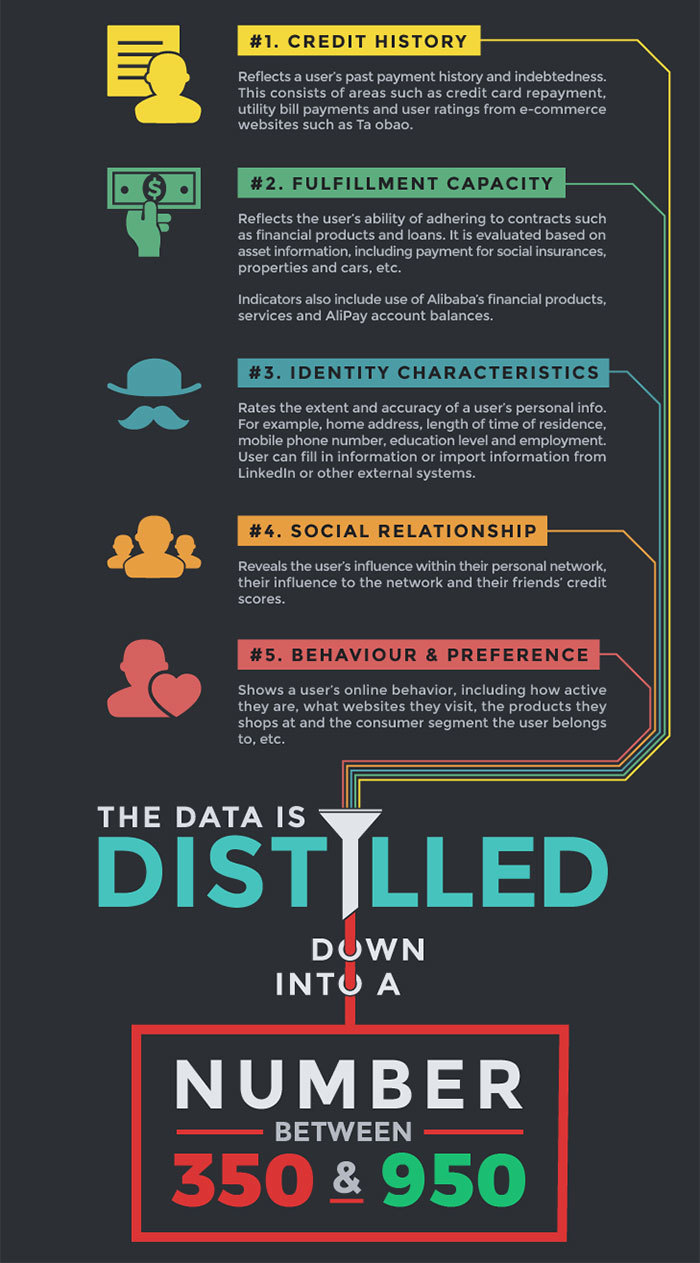 This information is already being collected in the United States. You are tracked everywhere you go when you are online.

There’s very little you can do about it, but here are some options.

Of course, a lack of available information can also make you look sketchy in the eyes of those who wish to snoop. You know the old adage, “You have nothing to worry about unless you have something to hide.” Well, that’s not really true anymore. Privacy is important. 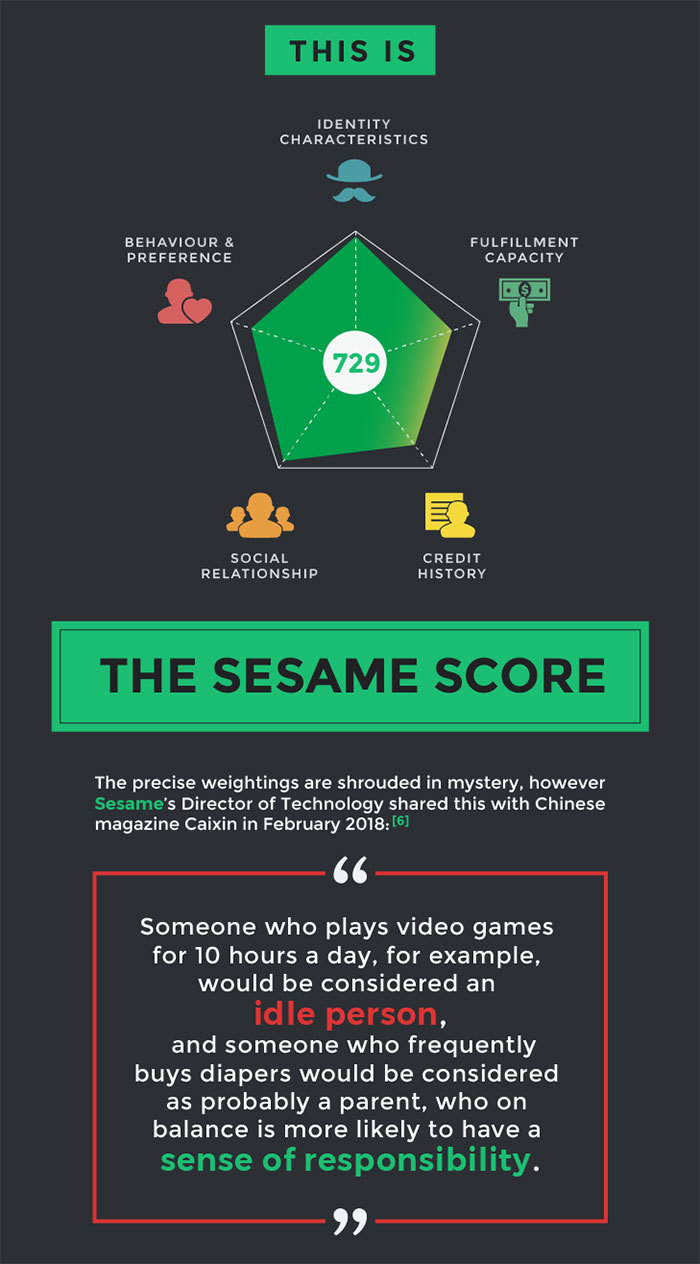 Right now, in China, the program is optional. But as more and more service providers join in, it will become more difficult to avoid. We see the same thing happening here in the United States. I literally went for almost a decade with no phone whatsoever. No cell, no landline. When people would ask for a number and I said I didn’t have one, they all thought I was lying. Finally, my phone number or lack thereof became such a detriment that I was forced to get one to be able to participate in things that were important to me.

The same thing is true of bank accounts. Over the past 20 years or so, with the advent of direct deposit and direct withdrawal, you simply cannot function in this country without a bank account. Then, of course, the banks are able to help themselves to a hefty fee from everyone and all the money in and out can be tracked. Good times.

Apple, by the way, is already giving people “trust scores” based on their phone calls and emails. Just in case you think I’m being far-fetched.

Here’s how this will be “sold” to any country adopting the practice.

It will make life “easier.” It will make things “cheaper.”  After all, if you’re a “good” person, it won’t be a problem, right? 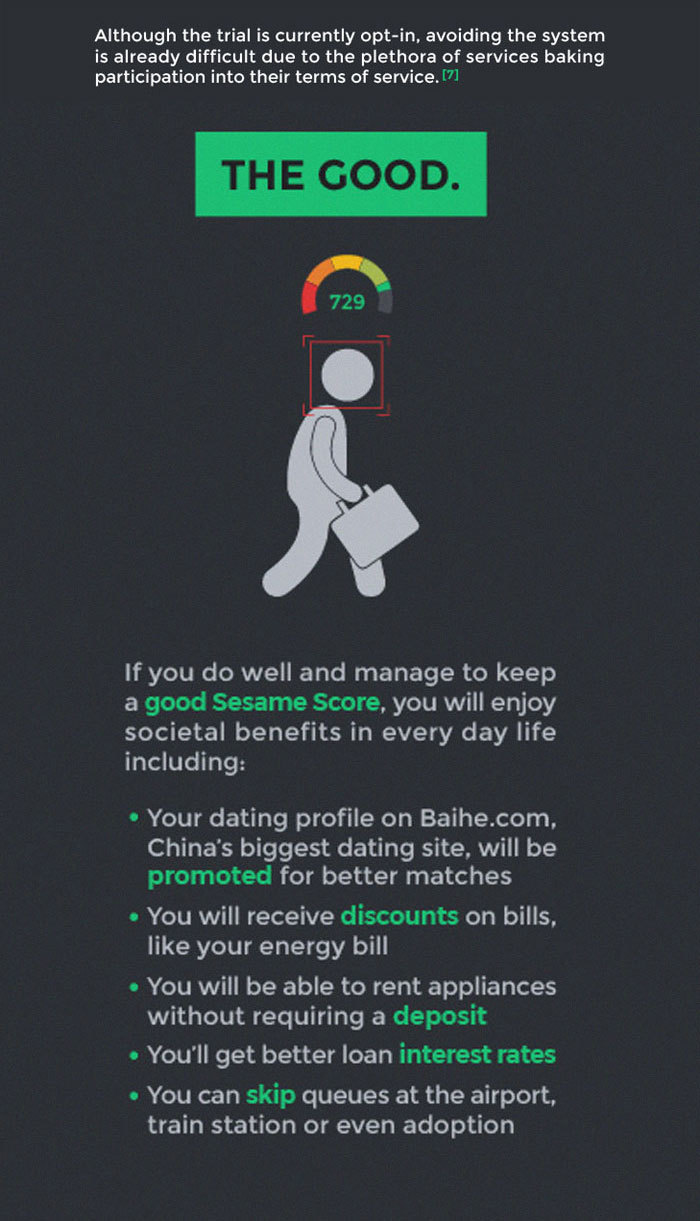 But what if you run into a rough spot? You like an unpopular candidate or political philosophy? You are the voice of dissent? You homeschool instead of sending your kids to public school? You have some money problems? You have “too many” children? You think your friends are being idiots about something and you try to help them see the error of their ways through discourse?

Oops. Not so good anymore. 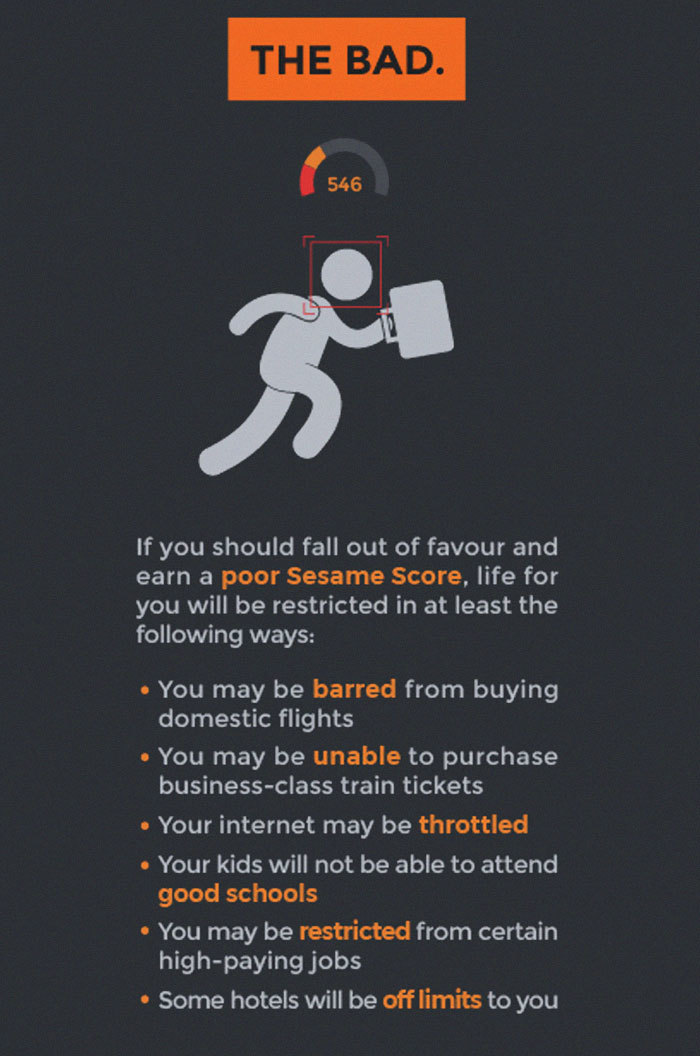 And that’s just for starters. Things could really, really go downhill from there. Welcome to rationing registration, and restriction in every single facet of life.

It could easily turn into a situation in which you can no longer function, have money, or be employed unless you toe the digital line. 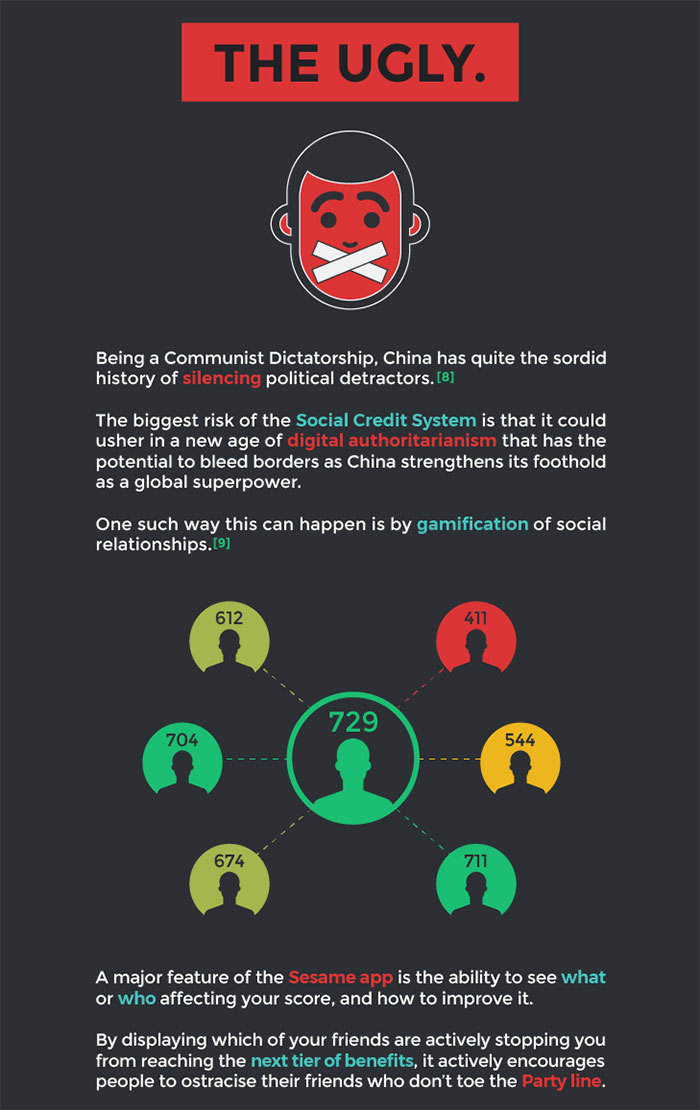 That social aspect in the photo above? We’re already seeing this in spades in America since the last election. How many people lost friendships over politics? How many families saw strained relationships over the candidates? How many people now think their former friends are complete morons? How many people actually lost jobs and promotions and work buddies over it?

Take that to the next level. What if your popular opinions could ruin your life? A lot of folks would be much less likely to speak out if this happened. And dissent is the American way. Our country was quite literally BORN from dissent.

Here’s an example of how this could go bad if you find yourself on the “wrong” side of the political fence. If you get Blacklisted, suddenly everything you’ve worked for and built all your life is GONE. 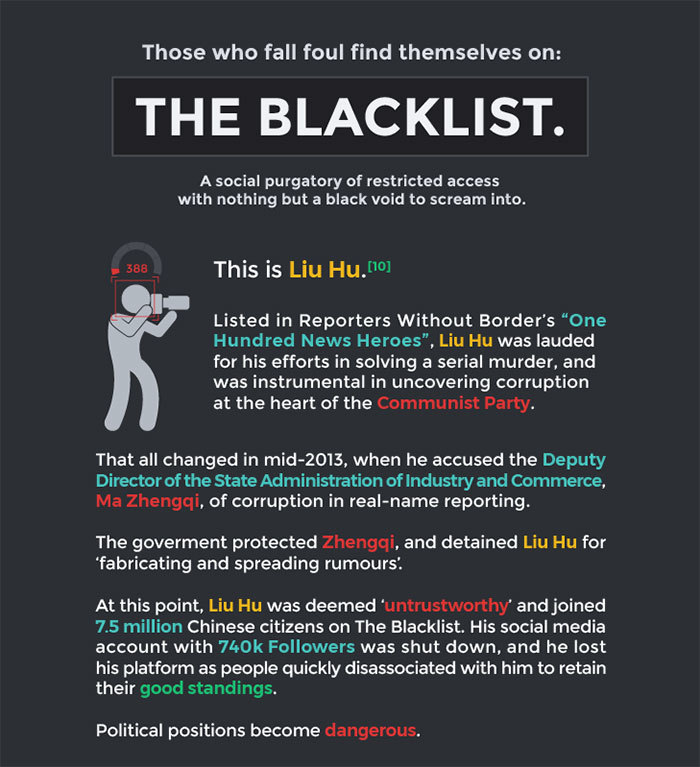 If you don’t think it could happen here, you need only to look at Alex Jones. I don’t like him much, but he’s lost everything because some companies got together to ban him. He’s lost all his social media accounts. He’s lost his email list. He’s lost his ability to accept PayPal. I assure you it’s only a matter of time until he can no longer accept credit cards. If he can’t finance his business and can’t reach people on social media, he is completely silenced. If my site costs a couple thousand a month to operate, his would cost exponentially more with his populous staff of writers and the server capacity he’d need for all the traffic he gets.

You don’t have to like or support Alex Jones to see the broad, sweeping arm that took him down. None of us with a public profile is immune.

I wrote more about the social media purge here. Just because it doesn’t directly affect you or you’re not on social media doesn’t mean that it won’t have an effect. 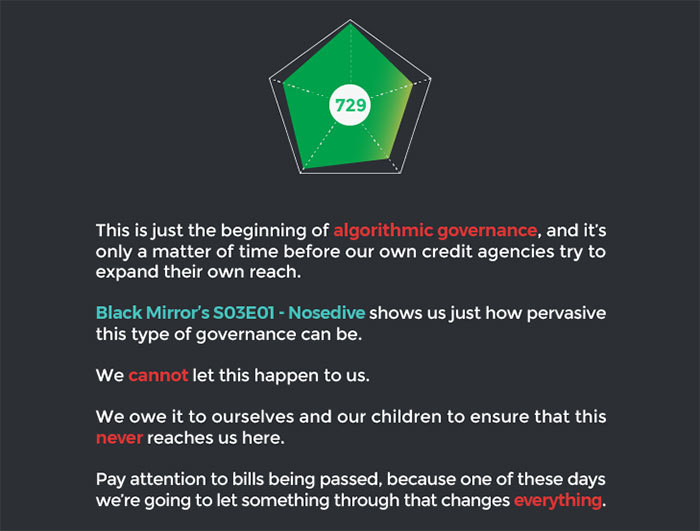 Insidious bills get stealthily passed all the time while we are distracted by ridiculous things like the Kavanaugh hearings and the Kardashians and the Kaepernicks of the world. People are freaking out about football while algorithmic governance is creeping up, unchecked.

You can find that episode of Black Mirror on Netflix. It’s terrifying because you could honest-to-goats see it happening.

Start distancing yourself from “the system” as fast as you can. And then, fight this crap tooth and nail. We, the good people of America, have raised our voices before on things that we see as injustice and we’ve won.

This is the fight of our lives. This is the fight FOR our lives. If this goes down on the scale that it is in China, the ONLY recourse would be pulling the plug. Ending the system altogether and going back 200 years in time for a do-over. No more grid, no more system.

I hope it never gets to that, but I’m far from optimistic. 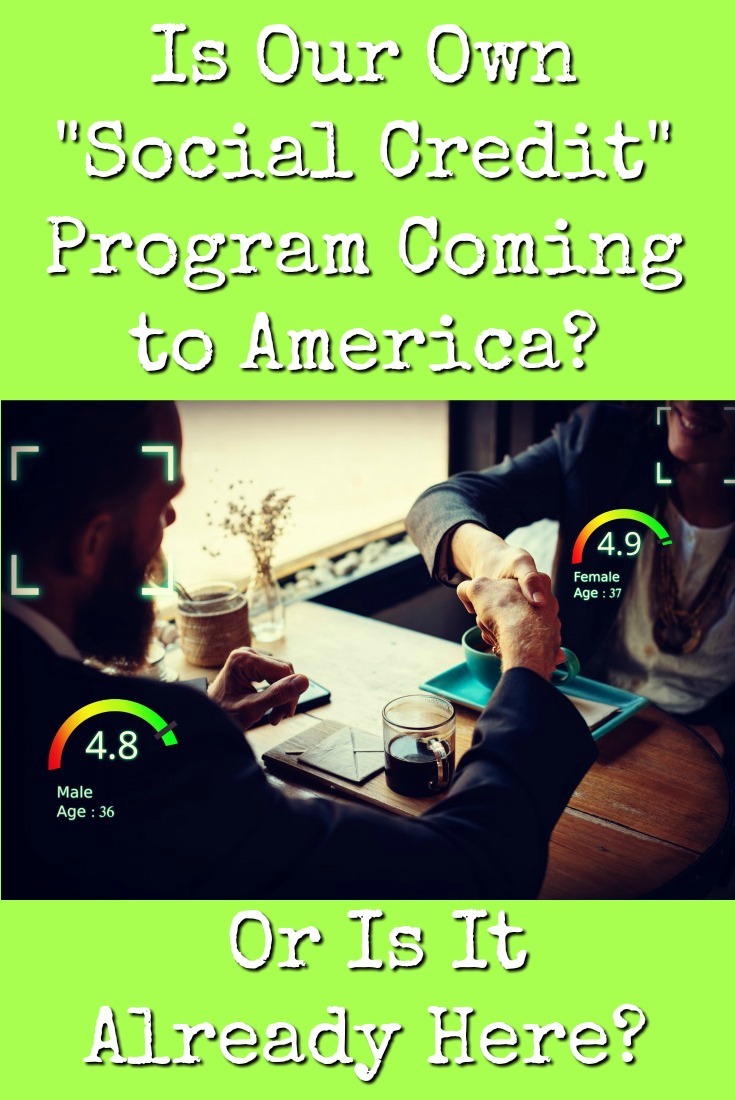