The Social Media Purge and How It Affects Everyone 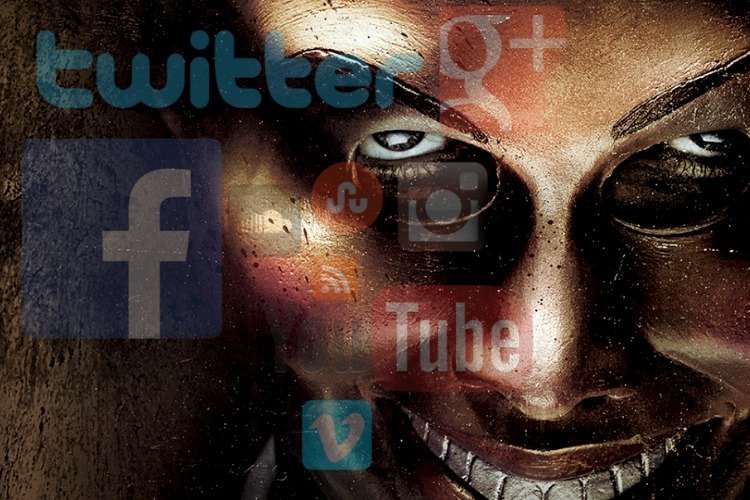 Just about every website owner I know is feeling personally victimized by the recent social media purge that has been going on.  But here’s an interesting fact: it isn’t, as is widely perceived, just conservative voices that are being silenced. It is dissenting voices.

It’s the voices of critical thinkers whose ideas run the gamut of philosophies who find that they no longer have much in the way of reach.

This social media purge affects everyone, even people who are not on social media. It does so in several ways:

You don’t have to be on a Twitter feed to see how this is an overwhelmingly anti-American problem. Like it or not, social media is a monumental source of information these days, and when it’s censored to only show one point of view, the future of our republic is in peril. We are well on our way to peak censorship and this has been carefully orchestrated.

Non-establishment websites are in trouble.

Their website traffic is plummeting because they no longer show up anywhere near the top of search results. Their posts on social media are not presented to the public – or even the people who deliberately opted to “follow” them.  Here’s an example from my own page. I have more than 30K people who chose to follow my page, as you can see in the top image. But in the bottom image, you can see how many of those people were actually shown my post. And this was actually a more successful one than many. 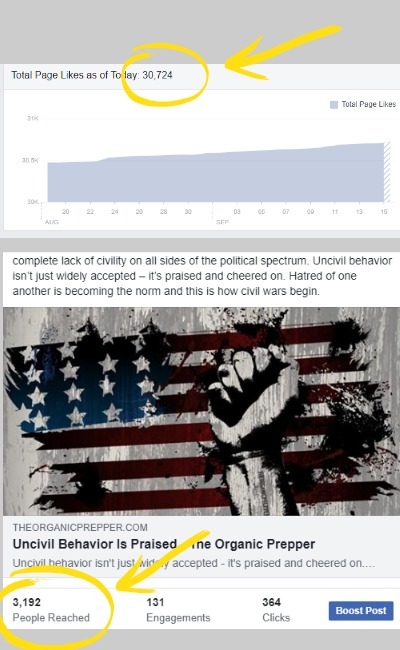 And the same thing goes for social media like Twitter too. I have an email list and if I didn’t, I’d hardly reach anyone. (If you haven’t signed up for my newsletter, you can do so right here.) And I really have to wonder – will our “offensive” websites one day just disappear, scrubbed from the internet permanently? It’s only a matter of time until the web hosting companies are being pressured to get in on the censorship game.

For the record, I consider myself neither conservative nor liberal. I try to veer away from any form of extremism and I make an effort to think a situation through before automatically aligning myself with a “side.” If anything, I’m a small l libertarian. My core beliefs are personal autonomy and freedom of association are to be sought in all cases that are not harmful to others.  And yet, somehow, that is threatening to some people.

Don’t think it’s limited to website owners. Twitter recently banned 70 million accounts, claiming they were “fake.” But there have been repeated accusations that conservative accounts have been at the very least “shadow-banned” if not all out deleted.

The most notable purge recently has been Alex Jones and Infowars.

Love Alex Jones, hate him, or feel utterly ambivalent aside from an occasional eye-roll, he has been the most notable victim to have been thoroughly erased from the public eye as far as the large social media outlets are concerned. He lost his voice on Twitter, YouTube, Facebook, Apple, and Google. Even his email service provider dumped him.

I’m not personally a huge fan of Jones, but I do believe what happened to him was collusion between social media giants. Big Tech got together and now Alex Jones has to find new ways to reach his very large audience. No one is going to stumble across him accidentally in a Google Search anymore. No one is going to see his videos embedded in another website anymore. Like him or not, he has the right to exist publicly.

Jones has a lot of money so this may not be the end of him, but for most website owners, this would be the absolute end of our ability to do business. And to be able to bring the information we bring, we do have to run our websites as businesses. It’s far more expensive than most people realize to run a site. I know that my own operating costs every month are more than $2000. A site as big as Jones’s would be many times that amount. When all your avenues of monetization are cut off, it wouldn’t be hard for a site – and the dissent and information they share – to cease to exist.

If nothing else, dissent is the American way.

Alex Jones is just the beginning of this purge. It’s going to get much worse.

A little allegory on becoming an unperson.

Think back to high school lit class when you read 1984 by George Orwell.

If it’s been a while, I’ll recap the pertinent parts of the plot from Spark Notes.

Winston Smith is a low-ranking member of the ruling Party in London, in the nation of Oceania. Everywhere Winston goes, even his own home, the Party watches him through telescreens; everywhere he looks he sees the face of the Party’s seemingly omniscient leader, a figure known only as Big Brother. The Party controls everything in Oceania, even the people’s history and language. Currently, the Party is forcing the implementation of an invented language called Newspeak, which attempts to prevent political rebellion by eliminating all words related to it. Even thinking rebellious thoughts is illegal. Such thoughtcrime is, in fact, the worst of all crimes…

…As the novel opens, Winston feels frustrated by the oppression and rigid control of the Party, which prohibits free thought, sex, and any expression of individuality. Winston dislikes the party and has illegally purchased a diary in which to write his criminal thoughts…

…Winston works in the Ministry of Truth, where he alters historical records to fit the needs of the Party.  (source)

The Ministry of Truth is control of all the things from which people could garner their opinions. They provide their own twist on history, current events, entertainment, education, and the arts. The people of Oceana believe them because there isn’t enough information to believe anything else. And questioning the Ministry is a thoughtcrime, punishable by horrible torture or worse. Part of Winston’s job is to turn anyone who doesn’t follow the Ministry line into an unperson and erase them from history as though they never even existed.

So who is behind this mass purge of dissenting voices?

There’s always a money trail to follow. Any time you wonder why or how something has occurred, look for the money. In this video by Ben Swann, an independent journalist who was mysteriously silenced for quite some time, he provides some important insight.

Rest assured, the way things are going, it isn’t long before we will see only what “they” – the people with the power and money to make it happen – want us to see.

And not only do we have organizations limiting our views of things that would broaden our minds, there’s also the rampant social pressure that we’ve seen since the last election.

When we were recently looking at rental homes, a potential landlady asked me for whom I voted in the last election. I didn’t even bother looking at the place because that is not a standard question one asks of a new tenant. It certainly has nothing to do with my ability to pay the rent. It has nothing to do with my potential for keeping things clean and in good shape. I just left because no house is worth dealing with a person who clearly let me know she was not someone with whom I wanted to do business.

And that is only my personal example. Employers check the social media accounts of prospective employees to see if they approve of how the person thinks.  People who disagree publicly with powerful groups get doxxed. Dozens of stories have circulated about social pressure, lost friendships, disagreements, and mistreatment in the workplace that originated from differences in political beliefs.

How can people be expected to form accurate opinions without all the information? How can they do so when they’re under pressure for their livelihood or their ability to rent a home or when they fear for their privacy?

It’s pretty clear that there are those who don’t want people to form accurate opinions. They want to gently, quietly, insidiously get everyone on board by limiting our access to the variety of philosophies and theories that make the world go round.

By making free thought something that is frowned upon and erased, they silence us all.