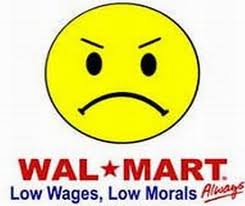 Last month’s EBT-glitch shopping spree landed those who abused their benefits in hot water when Louisiana Governor Bobby Jindal cancelled their SNAP cards. Taxpayers were assured that their dollars would not go to fund the chaotic free-for-all that ensued when shoppers discovered that their benefit cards suddenly had no limits. Wal-Mart made the decision to override the emergency measure of allowing only $50 per card and rang through heaping full carts of goods. The corporation publicly stepped up to the plate and said that they would take the loss. The government was out nothing, and Wal-Mart saved the day.

But who really paid for the recklessly allowed spending frenzy?

Was it the managers who made the decision to allow the shoppers to clear the shelves?

Was it the corporation itself cutting a check?

According to one employee (who has spoken on the condition of anonymity) it is the hourly employees who have paid these bills.

Within days of the spree, Wal-Mart employees, who make minimum wage or just over, were sent home early. Schedules were revised, hours were cut, and shifts were cancelled.

The anonymous employee described what happened:

I just read your write up on the Louisiana EBT fiasco.  I happen to live in northwest Louisiana, where the no-limit food stamp shopping sprees occurred at several local Wal-mart supercenters.

I also work for Walmart in the same market where the shelf clearing, free-for-all occurred.

While you mentioned that yes, the tax payers are not having to foot the bill for this “act of theft”, let me tell you who paid to cover Walmart’s gigantic  loss: Walmart employees!!!!!!! How you ask? By major cuts in payroll hours across this market area.

About 3 days after the story broke in the news, hours began being cut by a verbal request from management to associates to go home early. Soon after that signs went up by the time clock telling associates to recheck their schedules, as changes had been made. A few days later, the next sign that went up. It said, “if you are not scheduled, SEE MANAGEMENT BEFORE OVERIDING and clocking in”. In other words, we’ll decide who we want to be here today and who we want to go home on a daily basis.

The next cut came in the next posted schedule.  Many associates including myself had n0 hours, but many came to work anyway.  The next week, people were cut to 32 to 35 (full time employees). Not so sure about part time and temps. Signs are still posted by time clock as of 3pm today saying check with management before clocking in if not scheduled. Never in my [redacted to protect privacy] years of service have I seen that sign until this EBT thing.

No salaried managers, whether directly involved in the bad decision or not, were affected with pay cuts. Just hourly associates.

I’m sure if you were to contact those in charge of this decision to outright steal from the employees, you would receive a completely different explanation for the payroll cut.  It would go something like, “low sales …blah blah blah…over budget on supplies…slow shopping season, etc etc etc.” But what I’m telling you is the truth. Ask the employees of this market. Ask any employee who has been with this company 5 or more years, and they will all tell you the exact same thing. We’ve overheard it from our managers, and yes, it’s spiraled through the rumor mill, but it’s the simple truth.

I choose to remain anonymous in order to protect my ability to put food on my table and keep the lights on for me and my family, as jobs in my community are few and far between.

If you check the corporation’s “Working at Wal-Mart” page, you’ll see a different picture of corporate culture that has been painted by a rather dishonest copywriter.

We’re known around the world for helping our customers and Members save money so they can live better. We do that on a foundation of integrity – by being honest, fair and objective. This is the basis of our unique corporate culture and how we bring our mission to life. And it begins with the values and morals that were deeply rooted in our company by Sam Walton.

Walton was known for treating employees well, offering benefits, and extending the opportunity to earn higher wages based on merit and hard work.

Many years ago Wal-Mart’s founder, Sam Walton, figured out the value of creating a true employee partnership. He knew that under the right circumstances every employee has the capacity to be a business leader. For this reason he pushed decision-making downward by empowering all of his employees to act like business owners. Sam Walton referred to his “employees” as “associates” so they would act like entrepreneurs, and take ownership of the business. To really capture that feeling that owners feel, Wal-Mart offers profit-sharing to all of Its employee associate partners. At Wal-Mart profit-sharing is not a something for nothing proposition. Only when predetermined sales, expense, and profit goals are met do the associates share in the company’s profits. (source)

Wal-Mart’s new leaders took to heart one element of the founder’s business philosophy–the importance of reducing costs–but they didn’t show his intuition about the importance of making employees feel as though they had a stake in the company. They were already at a disadvantage as it was. Wal-Mart’s rate of growth was impressive but slower than in its early years–the inevitable result of becoming so big–and this weakened the appeal of such incentives as stock ownership. But character also played a role. The company’s focus on saving money was leading it to make unrealistic demands of local managers, particularly with regard to payroll, and this pressure would eventually lead to serious trouble.

The simplest way to save money is to avoid paying people for all the hours that they’ve worked–a practice called off-the-clock work. Of course, Wal-Mart can’t explicitly force employees to work off-the-clock. But it can set payroll targets that are nearly impossible to achieve without doing just that. As one manager explained to The New York Times in 2002, “You got to hit the payroll budget they set for you, but if you’re over, they discipline you.” Plausible deniability, then, becomes essential. Workers get assigned more work than they can possibly complete on their shifts–while being warned that overtime is out of the question. No intelligent employee would fail to get the message: Finish the job by whatever means necessary. “We worked off the clock pretty much every shift,” one employee told the Times. “The manager said if our jobs were not finished, we had to clock out and finish our jobs so no overtime would show up.” (source)

Wal-Mart’s slogan is “Save money, live better.” Apparently that whole “live better” part doesn’t apply to their employees. The website “Making Change at Wal-Mart” describes the plight of employees of the corporation. If you really want to know who is paying for the EBT shopping spree, these are the people whose hours have been cut to subsidize the bad decision of Wal-Mart managers.

Some people reading this are probably saying, “Why don’t they just quit?” or “It’s their choice to work there.”

In the United States more than 102 million people do not have a job. In many parts of the country, particularly rural regions, Wal-Mart is one of the biggest employers in the area. If there are no jobs around, would you give up a job, even a bad one? For many employees, this is the only option other than welfare.

It’s a disgusting example of corporate greed to punish those who are struggling to get by for the mistakes of thieves who took advantage of a computer malfunction and the highly-paid salaried employees who made the decision to ignore the established $50 limit and allow them to do so.