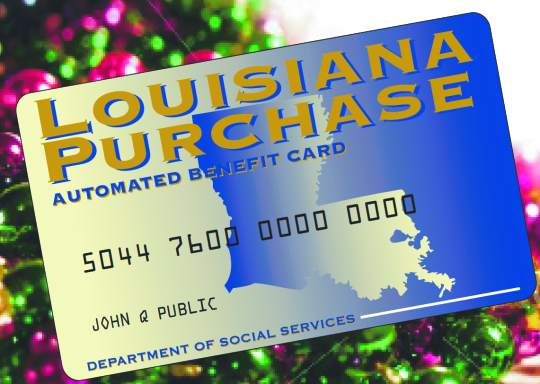 Remember last month when EBT cards in Louisiana showed no limits?  Remember how all of those EBT users had a chaos-fueled shopping spree and emptied store shelves within hours?  Remember how that one woman with only 49 cents left on her card tried to leave with $700 worth of food?

Well, the governor of Louisianna remembers too, and he has taken the unprecedented move of canceling the benefits cards for every person suspect of participating in the fraudulent free-for-all.

… Louisiana governor Bobby Jindal’s office will cancel food stamp benefits for anyone who participated in a fraud and shopping spree catalyzed by an EBT malfunction.

More than 12,000 people were sent an insufficient funds notice when the problem with the EBT cards was fixed on Oct. 12; those who transgressed may lose their EBT cards for a year.

Suzy Sonnier, the secretary of state at the Department of Children and Family Services, released a statement saying: “We must protect the program for those who receive and use their benefits appropriately according to the law. We are looking at each case individually, addressing those recipients who are suspected of misrepresenting their eligibility for benefits or defrauding the system.” (source)

It all started on October 12, when technical problems plagued the EBT system across the country.  17 states were affected.  Most of the benefits recipients couldn’t use their cards at all, causing mini-riots across the country when they were unable to buy food for their families. Within a few days, the USDA had sent notices to the states ordering them to freeze SNAP funds as a contingency plan because of the government shutdown.  Meanwhile, in a few places in Louisiana, the EBT malfunction caused the cards to show no limit, and many stores allowed users to shop anyway.

And shop they did.  Even though the accepted policy is to allow benefits recipients to purchase $50 worth of groceries in the event that cards malfunction, many stores did not limit purchases.  Grocery carts were filled with reckless abandon and users gleefully left the stores with hundreds of dollars worth of ill-gotten supplies.

Vitter, R-La., called for state Attorney General Buddy Caldwell and the Jindal administration to take action against shoppers who generated national headlines, spawned YouTube videos, and created a Twitter frenzy after a failure in the electronic benefit transfer system — the process for using food stamps — allowed them to spend beyond their balances in mid-October.

Smartphones captured images of carts piled high with groceries that were abandoned once the system came back online.

Taxpayers did not lose money because of safety measures built into the food stamp system.

“It should be clear that someone who tried to buy massive amounts of groceries purposely attempted to exceed the program limits. That sort of fraud should be met with disqualification from the program at the very least,” Vitter wrote.     (source)

Those whose cards have been cancelled may appeal the decision in hopes of having their benefits restored, but if they lose the appeal, they could lose their benefits anywhere from one year all the way to…forever. Suzie Sonnier wrote,  “Louisiana’s current SNAP policy allows a one year sanction from the program for a first offense, a 24 month suspension for a second offense and a permanent disqualification for a third offense.”

Let’s hope, for their sakes and that of their innocent children, that the fraudulent shoppers purchased long term storage foods, because it looks like they are going to need it. As always, it’s the children who will really pay the price for the irresponsible actions of their parents. Through greed, dishonesty, and an entitlement mentality, these folks have just created their own SHTF event.