How To Grow Tomatoes Indoors 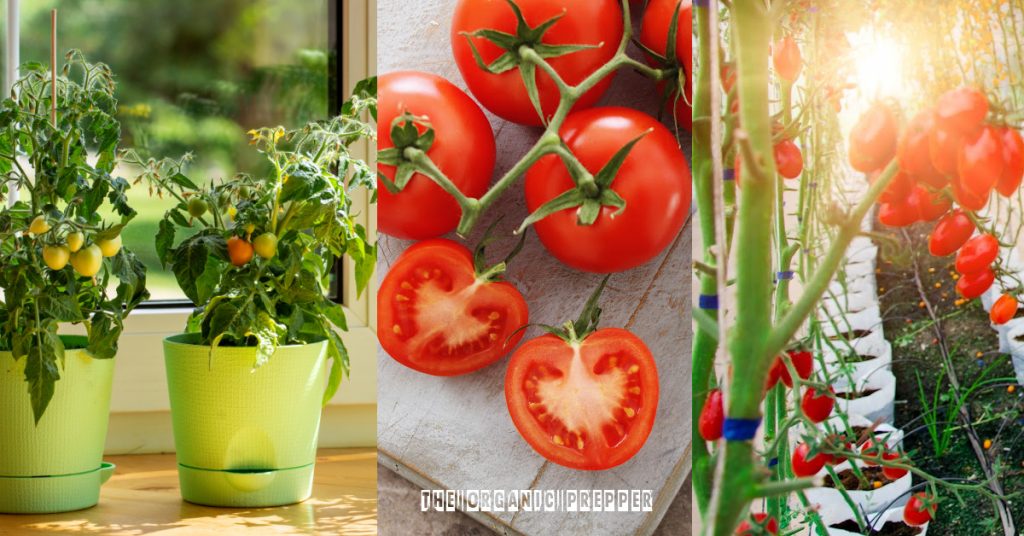 It’s pretty standard wisdom that there are few things better tasting than homegrown tomatoes! Granted, some people don’t like tomatoes, but for those of us who do, the taste of a fresh tomato from the garden simply cannot compare to store-bought. But what do we do once the garden is done? Perhaps you’ve begun to question how to grow tomatoes indoors?

Many areas, including mine, go very subzero during the winter, and even a heated greenhouse won’t cut it. I wasn’t inclined to heat a greenhouse before inflation hit, much less now. So what to do? Must we go without that wonderful taste, or any fresh food at all, during winter? The short answer is: No! There are options. Read on!

(Looking for more ways to boost your food security? Then check out our free QUICKSTART Guide to building a 3-layer food storage system.)

You have two primary choices here.

The two main options for growing tomatoes, or any other food indoors, are standard pots and hydroponics. The latter includes both tabletop units and Kratky jars. Of course, a good DIY’er can set up a nice hydro unit. I knew a fellow who made an aquaponics unit in his garage using PVC pipe and those red Solo cups, in fact, but I digress.

Honestly, I’m going to nix Kratky jars for tomatoes right off of the bat. I’ve written about their quirks here, and my attempts yielded a whopping four (4) tomatoes from two plants. That’s not a really great return on investment, so while you’re welcome to give it a try, I’ve nixed them for this purpose.

I’ve written about my tabletop units here. I find these work well for growing greens and herbs, but what about tomatoes? The good news: it CAN be done. The bad news: even a micro-dwarf or dwarf variety will get big enough that you can’t grow anything else in the unit.

As of this writing, I have one tomato plant in my twelve-hole unit. I haven’t counted the exact number of tomatoes, but I do get a few every few days, and the first blooms were enough for a small salad every few days. My determinant variety is still going, flowering and setting fruit.

I’m actually curious to see how long it’ll live since common wisdom says that determinant varieties flower, fruit, and die, producing their fruits all at once. Mine is a Minibel, a stocky dwarf variety that’s been going like an EverReady battery. In fact, it’s outgrown my unit space and would have easily climbed the walls if I hadn’t trimmed it back.

There’s no place to mount grow lights in that space, and the internodes were getting too long anyway. So the plant got a haircut, and boy, did it bush out! The same variety didn’t do nearly as well in the Kratky jars as it’s done here, and I haven’t had to deal with the quirks.

Best of all: they’re quite yummy! And I don’t see the electric bill skyrocketing, at least not because of my hydroponics units. In fact, these are generally held to be quite energy-efficient. Given the price of tomatoes in the store, I believe I’m money ahead to grow my own. An added benefit: I know my tomatoes haven’t been exposed to crazy chemicals, nor have they been harvested early for transport. Early harvesting has the unfortunate effect of producing a less nutritious tomato, in fact. I have none of those problems with my homegrown food.

So how about growing in pots?

I tried one standard cherry tomato in a pot one year next to my south-facing patio door. The plant lived but never did flower or set fruit.

It’s my belief that the winter sun simply was not strong enough to stimulate flower or fruit production. As I recall, I set that pot outside in spring, and it took off, yielding well and plentifully. These days I’m growing some micro-dwarf varieties in pots, but they’re under a standard T5 grow light as well as an east-facing window.

I added a heat mat since the soil was cool to the touch, and quite frankly, when it’s -40F outside, it’s cold EVERYWHERE. So, grow lights, and a heat mat can only help.

I’m growing in two small 7” pots and have sprouts. The varieties I’ve chosen are Tiny Tim and Dancing With Smurfs, the former being a determinate variety and the latter indeterminant. If you’d like to purchase seeds at a better price, I suggest Heritage Seed Mart. My Orange Hats were half the price here as other places were offering! This site also has a lovely selection of varieties.

One thing to be aware of is pollination. Tomatoes are self-pollinating, but there isn’t much of a breeze in my house, nor are there insects in winter. The good news is that shaking the plant will do the trick.

I’ve mentioned micro-dwarf and dwarf tomatoes, but what are they exactly?

These are cultivars specifically developed for their tiny size. Many are open-pollinated or heirlooms, so you can save the seeds. Dwarves grow about 12” with very sturdy stems and a tree-like habit.

Micros are even smaller than dwarves, but both types are specifically bred for their small size. This quality makes them a much better choice for an indoor container or hydroponic gardening than standard varieties. My garden tomatoes easily grow to 6’ tall, which is much more room than I have indoors!

Also, my attempts to grow standard varieties in containers resulted in nice plants but few or no fruits due to cramped roots. The fruits I’ve harvested from my plants are the size of a standard cherry tomato, so what’s not to love? It’s said that these can grow slicing tomatoes as well, though I haven’t tried that. Yet.

You can read more about the Dwarf Tomato Project here.

So that’s really all there is to it!

Make a nice space, and add an appropriate grow light and perhaps a heat mat. I’m using a standard seed starting mix combined 1:1 with some garden soil and will fertilize as required. Select a nice dwarf or micro-dwarf variety and grow as normal. You’ll be enjoying tomatoes grown indoors in a few months!

Have you grown your own tomatoes indoors? How has it worked out for you? Do you have any questions? Please tell us in the comments below! 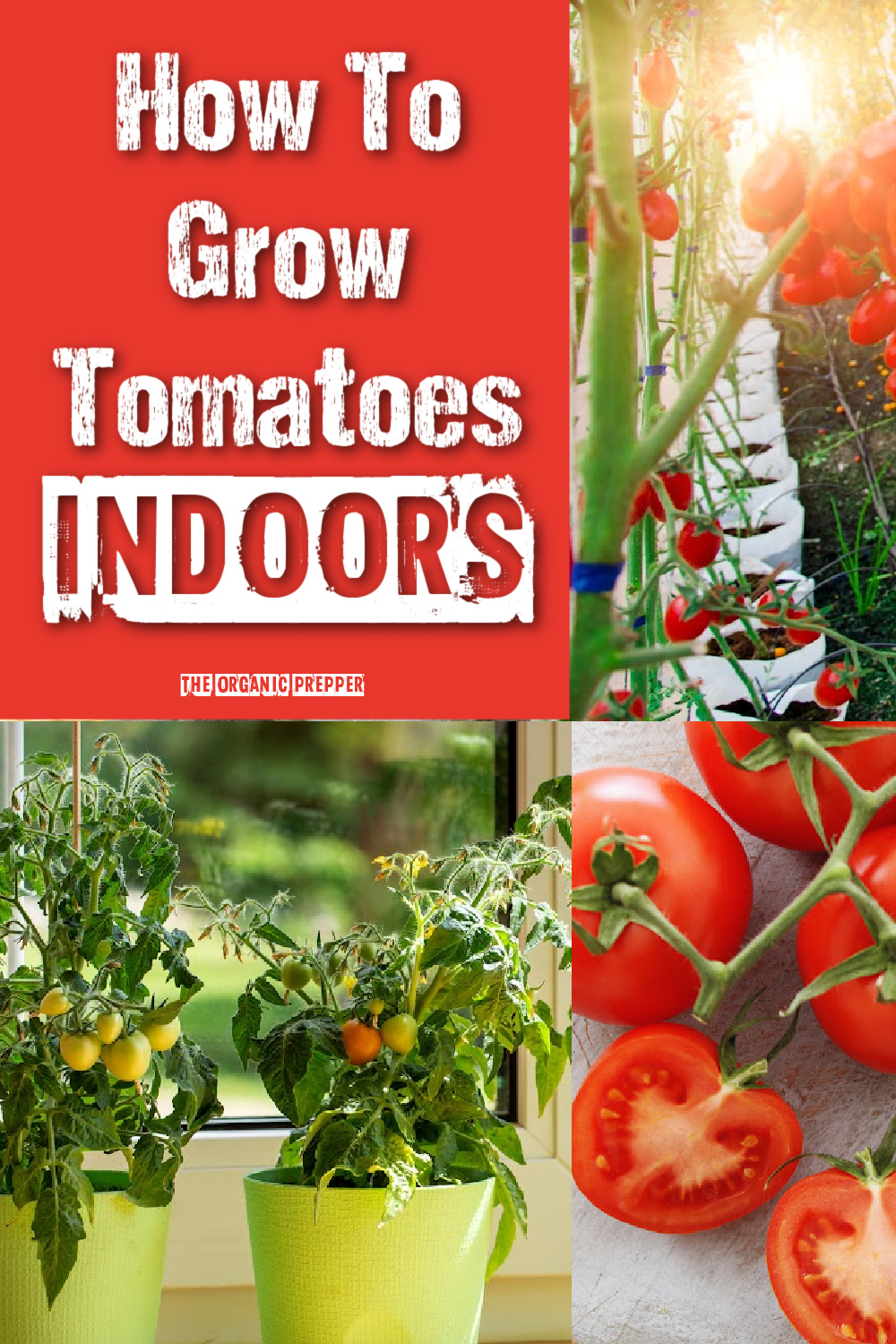