Tabletop Hydroponics: What I’ve Learned About the Quirks of Kratky Jars 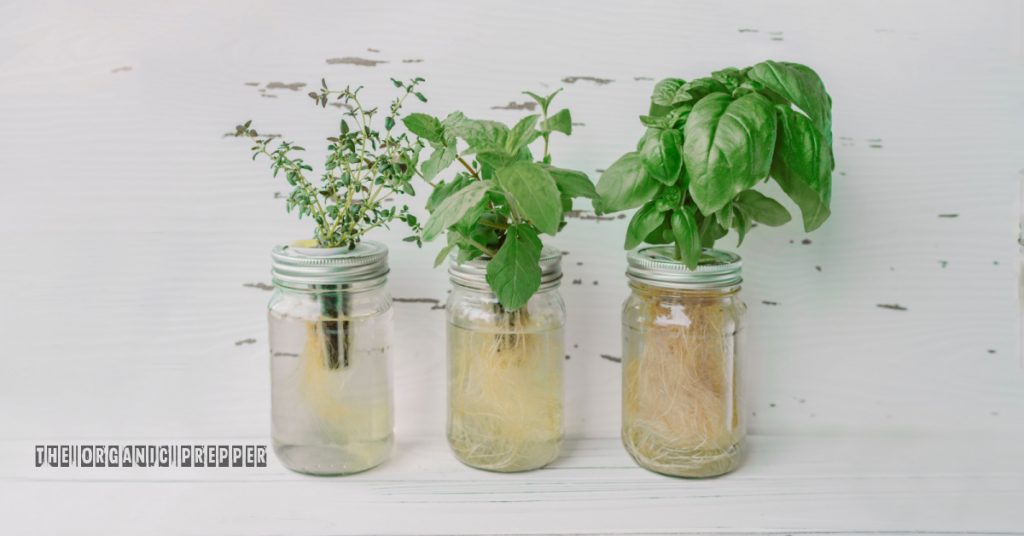 Since I outgrew taking electrical outlets apart by age ten, I’ve been playing with other things. Right now, it’s Kratky jars, and they’re a bit more challenging than I expected. Contrary to what I’ve read on the Internet, they are not set it and forget it projects. They, too, have their quirks. Please allow me to explain.

I made my Kratkys from 1/2 gallon Kerr jars. Those accept a 3” net pot very readily, and the jar ring works well to secure the pot. It’s important that roots have some air, so they don’t rot, especially in these. I had a nice micro-tomato in my other unit, so I transplanted it to see how it would grow in the jar. And it grew very well until one day, I noticed that the nutrient solution in the jar was very low.

The tomato had set fruit but was a long way from ripening, so I added more solution. The tomato wilted and died within a few days. Upon doing more in-depth research, I learned that this is actually a quirk of the Kratky method.

When growing something Kratky style, it’s important to grow something that will be mature and harvestable by the time the nutrient solution is used up. Adding more is NOT an option, at least not in the traditional way.

Take the plant completely out of the unit. Clean the jar with some bleach, refill it with the nutrient solution, and replace the plant. I have no explanation for why this works, but it does. The micro-tomato I’m currently working with didn’t die and is now setting fruit.

Extra note regarding pollination: be sure to shake your tomatoes or otherwise provide for pollination. The insects are dying back for the cold winter, so they can’t help me. I hate houseflies and Asian beetles anyway and usually feed them to my carnivorous plants.

(What do you do with the food you grow? Why not learn how to can it with our free QUICKSTART Guide.)

Another thing I’ve been playing with is germinating seeds in Jiffy pellets within the net pot. I’ve been less than successful with this, and I’m not sure why. I did have some salad greens sprout and grow. Then I made the mistake of pulling the Jiffy pellet out of the net pot to see how far the roots were growing. I put it right back into the solution, and the plant died.

I’ve also reseeded some of the jars with the exact same varieties I planted in the smaller IDOO unit at the same time. The IDOO seeds have sprouted, and these have not. The Jiffy pellet being too wet may be an issue, but really, since I germinate seeds in wet paper towels with no problems, I can’t imagine why.

Some of the videos I’ve watched use net pots and sponges similar to those I already have to fit a smaller reservoir. The other possibility is that my seeds are falling too far down in the pellet, similar to planting too deeply. I tried germinating in Jiffy pellets on a heat mat, then transferred the entire thing to the jar. This didn’t work either, so I tried germinating in the sponges that came with my IDOO units.

The seeds germinated and started to grow but then damped off and died.

I may try the paper towel and then pot method. But it’s so odd that seeds will germinate and grow when those sponges are in the tabletop units but not in the jar. Possibilities include not enough heat or not enough water circulation in the jar. The LED lights in the tabletop units provide lights in red, blue, and white spectra. The pump circulates water. Those are the only differences I can think of right now.

The other solution I’m considering is to germinate the plants in the tabletop unit, then transplant them into the Kratky when they’re old enough. As I noted above, this worked well for micro-tomatoes. Perhaps it’ll work with greens.

So far, my micro-tomatoes have been my biggest success using this method. I have two right now, both Minibel, and both are setting fruit. Neither are as big as the Minibel in my larger tabletop unit, but they are nearly 2’ tall with some branching. When combined with the salad greens grown in the tabletop units, I have a nice winter salad or a hummus sandwich.

There is a matter of the electricity costs since even a Kratky requires lights up here.

The winter sun is simply too weak, and the space next to a window is too cold. In fact, my windows will have lovely frost patterns during the coldest part of winter! This is much too cold for anything to grow. Therefore, grow lights are required. The tabletop units have simple aquarium pumps as well. With the caveat that this information may be a bit out of date with inflation, check out Aerogarden’s calculations on energy usage by their units.

As we can see, tabletop hydro really doesn’t use that much electricity per unit. Of course, having several will add up. They do give the formula they used, which interested parties can use as well.

Remember: Kratky jars only need light, though a heat mat in colder climates could be beneficial as well. And it seems to me quite a bit cheaper than the grocery store! Produce needs to be shipped in during the winter months, which requires fuel, trucks, and workers. Greens have been expensive in summer when they grow on the farm under natural conditions. I don’t see them being any cheaper during the winter.

Therefore, the energy used to produce them at home will be a net cost savings. And it is possible to save the seed, including from greens. Not only that, but the cut-and-come-again principles can be applied here. Grow an indeterminant tomato. It’ll keep producing as long as the indoor weather is right. The greens and medicinal herbs I’m growing in my tabletop units are producing very well.

So that’s my experience so far with my Kratky jars!

I’m finding that I learn a great deal more by gardening than by watching videos. Yes, research is helpful, but nothing teaches like doing! I’ve learned how to replace the nutrients in my reservoir without killing the plant and a few different ways that germinating seeds does NOT work. Garden and learn! And don’t let failure stop you. Let failure TEACH you. Then you’ll be unstoppable!

Have you tried using Kratky jars? What have you learned? Are you considering adding this method to your home food production? Let’s talk about tabletop hydroponics in the comments. 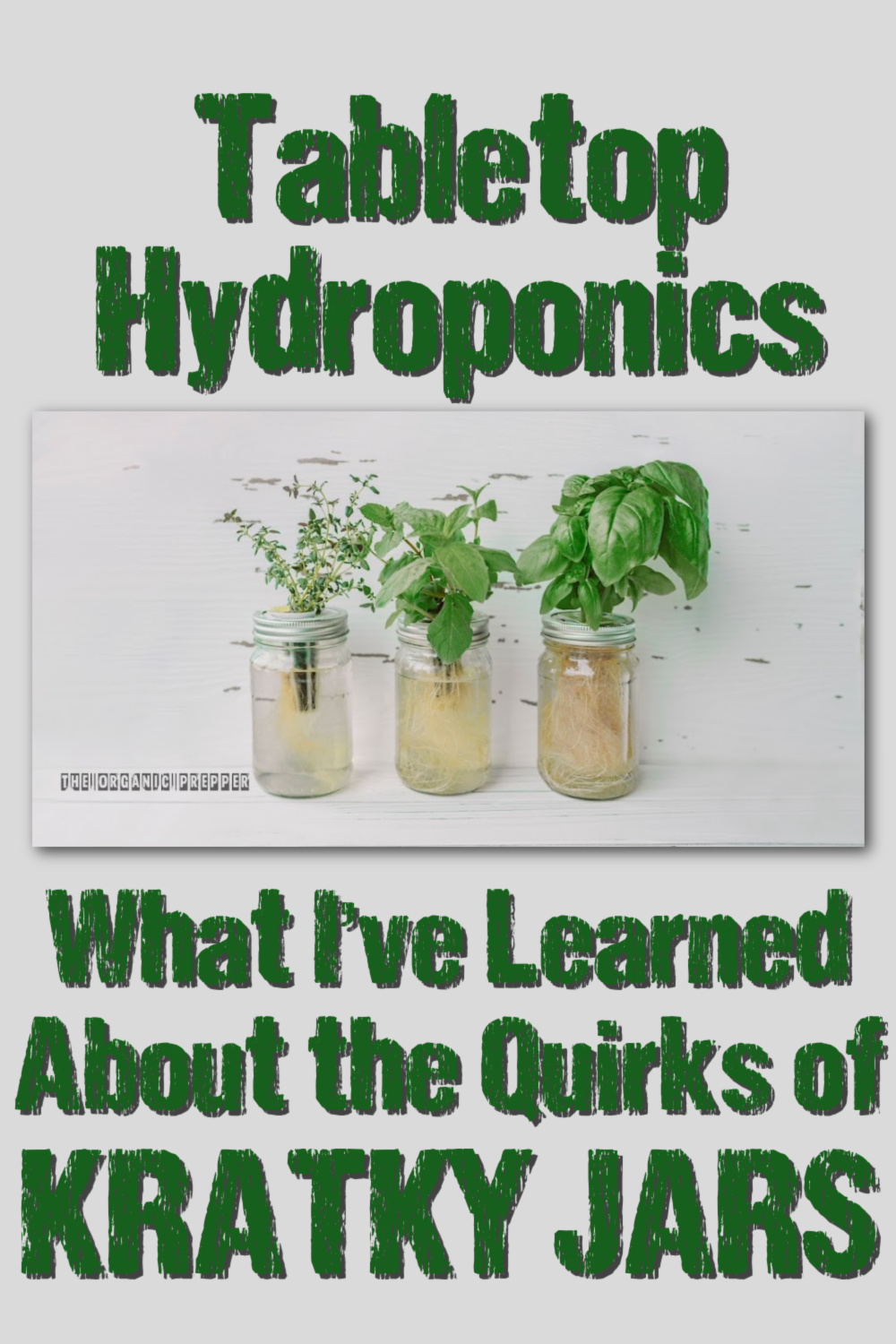