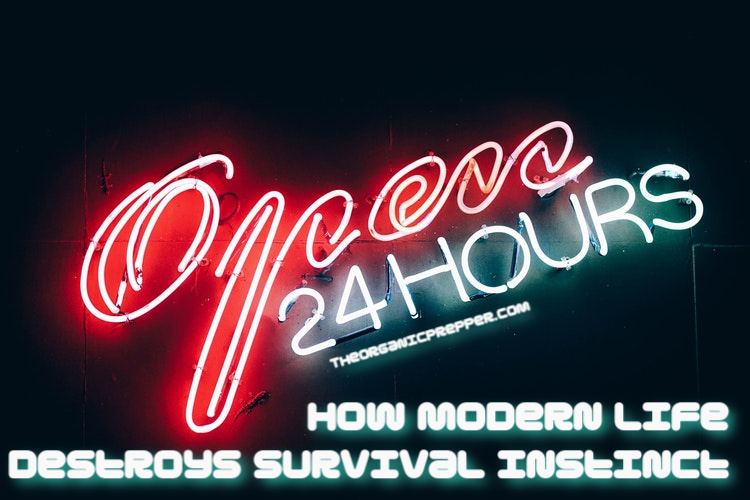 Our world today would seem magical to our ancestors. Our needs are met almost immediately, we have clean water at the turn of a knob, heat at the push of a button, and light with the flip of a switch.  Food is purchased in a box, ready to heat, and a person can prepare a meal in under 6 minutes using the microwave oven that’s a fixture in most modern kitchens.

Our world is clean, convenient, and loaded with abundant resources, things that took significant time and effort to produce in days gone by. And all of these resources are available 24 hours a day, 7 days a week. We don’t even have to go out and get the resources if we live in a town of much size – Uber and Instacart will bring your conveniences right to your door.

But all of this convenience comes at a high price, one we don’t even realize exists until a situation arises in which the ready answers aren’t there, the food is not available, and the dial on the thermostat no longer has any effect at all.

Modern life destroys survival instinct. Most folks just buy the answers to all of their problems and they have lost the ability to think. Self-reliance is an act of epic rebellion against the status quo.

In the midst of a challenge a few years back, I discovered I was out of oregano.

Normally, I’d hop in the car and go to the grocery store. I’d buy some oregano, some other interesting things that caught my eye and grab a coffee on the way home to fight that mid-afternoon crash.

But, since I’m participating in the Once-a-Month Shopping Challenge, running to the store was not an option, and wouldn’t be for 3 more weeks.  Since the tomatoes I was processing wouldn’t last that long, I had to think about solutions – real solutions that did not involve running to the store.  (I substituted thyme and basil, by the way.)

This got me thinking about how we usually solve problems in this day and age.

We buy the solutions to our problems. Slow food has turned into fast food. We replace instead of repairing.

We go to the store.  We order a new whatever from Amazon and it arrives at our door the next day. If our central heat goes out, we plug in a space heater and huddle beside it until the repair guy arrives. When he does get there, he replaces parts instead of taking them apart and fixing them.

What does this mean?

It means that the solution to nearly every problem that occurs can be purchased. Almost anything we feel that we need can be purchased, often within 30 minutes of the thought popping into our heads.

The ability to solve problems is nearly extinct

We need to get out of this replacement-based instant-gratification mindset. Because sometimes, you can’t buy your way out of a problem. Sometimes you have to fix things yourself, come up with substitutes, and solve your own problems.

The trouble is, most folks are no longer wired that way. It’s been bred out of them over the past two generations of convenience. Children are sensitive weenies, everyone gets a trophy, and the phrase “This makes me uncomfortable” is like a magic chant that people use to protect themselves from an offense of any type.

People who can solve their own problems are becoming further and further in between. In another generation or two, if we continue on this track, it will go the way of the dodo. You might catch a glimpse of an independent person here and there, but no one would really believe you saw one. Sort of like the Sasquatch.

But in reality, it’s the inability to solve problems that will mean a person’s demise.  Everyone will be great, even smug in the comfort of their conveniences, during good times, but when a crisis strikes, they’ll be helpless.

Case in point: remember when Superstorm Sandy hit the East Coast a few years ago?

Within THREE DAYS, people were completely out of food and begging the government for help. Many were unable to survive without assistance for even a week.

When a crisis strikes, you do not want to be in the situation of the folks mentioned above. Here are 4 things you can do to enhance your ability to solve problems.

Before purchasing a replacement for your broken widget, figure out how to fix the widget. Use a whatsit instead of a widget. Figure out how things work and really use your brain instead of waiting for others to solve your problems. Start now by learning to live without running to the store or logging on to Amazon to buy a solution.

Learn to repair and mend simple household items. Learn to change a tire. Learn to cook and figure out substitutes if you’re missing some vital ingredient. Learn to use tools.

Furthermore, try to figure things out without turning to the internet for an answer. This isn’t to say that I don’t use the internet a lot. (I can’t even tell you how much of my farming information comes from Youtube.) But, learn to observe and use your instincts and inherent skills too.

You can watch videos about raising baby chicks all day long, but until you actually raise them, you don’t develop that indescribable ability to assess when something’s wrong, the understanding of their needs, and the ability to resolve concerns. You can’t feel a chick’s crop to see if it’s full unless you’ve felt when it’s empty.

This holds true with a lot more than just baby chicks, of course. Most skills are not innate. You have to try, fail, and learn from your failure before you can succeed. A lot of people have magnificent plans to “live off the land” or “homestead” but they’ve never done any of these things and their inexperience will get them killed.

You have to live your life, not just read about it on the internet.

This is what prepping is all about. We think ahead about the worst case scenario. We build our supplies accordingly. We have a full pantry, a preparedness plan, and a host of supplies to help us through situations that cause a loss of the grid. We have a stash of natural home remedies and a set of survival tools to help us through a disaster.

By thinking beforehand about the things that might happen, we’re more easily able to accept them when they do occur. We’ve already prepared Plan B and can glide into prepper mode with confidence.

When disaster strikes, there are three steps you must take at any point in the crisis.  You have to accept that the worst has occurred instead of retreating into cognitive dissonance. You must make a plan quickly. You must act immediately and decisively.  And if your plan doesn’t work, you must start over with accepting it and move on to Plan B. Or C. Or however many letters it takes you to save yourself. (Click here to read about these three steps in more detail.)

In The Unthinkable, one of my favorite books on the psychology of surviving a disaster, Amanda Ripley wrote about interviewing the survivors who had been in the World Trade Center when the planes hit on 9/11. The main difference between those who lived and those who died was the ability to wrap their brains around the imminent danger immediately. The survivors described the last time they saw some of their coworkers.  There were many people who simply could not accept the fact that a plane had crashed into the building and that they must immediately evacuate. They gathered their belongs, tidied their desks, finished reports. They didn’t feel the same sense of urgency that those who survived did, because the situation was so horrible that they just couldn’t accept it. Their inability to accept the scope of the danger caused many of them to perish in a tragic incident that other people, who acted immediately, survived.

Think about our current society, obsessed with the latest family dramas on so-called reality television and the newest fast food restaurant.  How high are the chances that those folks will be able to accept a dramatic change of life, one that means that they must produce their food, dig a latrine, and solve their own problems?

Don’t let our lifestyle of convenience spoil your ability to make decisions and rescue yourself. Take steps to make problem-solving your lifestyle. Be ready for the day when the answer is not as close as a 30-minute round trip to the store to pick it up.

Don’t wait for someone to tell you the answers. Figure things out, learn from experience, repair, substitute, and create.

Be in the minority.

Do you think modern life is making you soft? Do you practice the skills on which you plan to rely when the SHTF? Let us know your thoughts in the comments below. 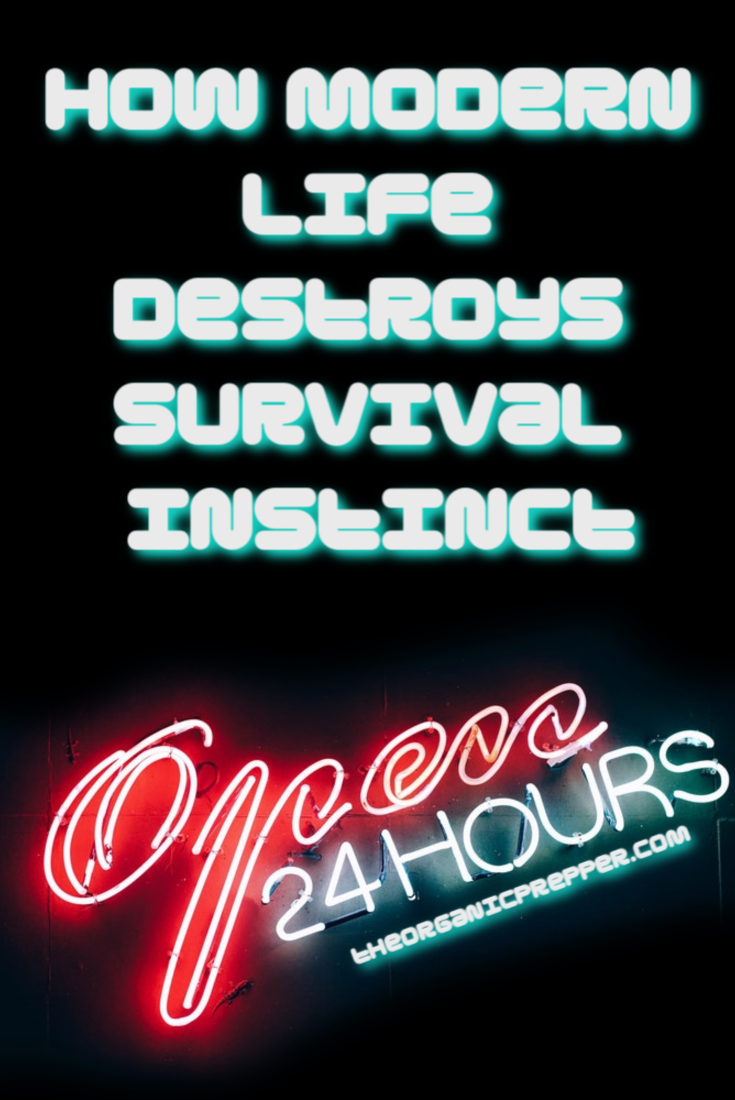