How to Survive ANYTHING in 3 Easy Steps 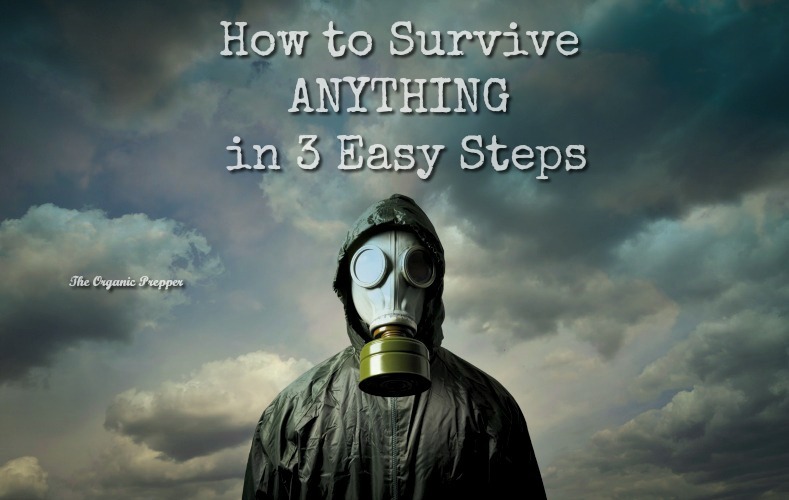 You can have enough food to ride out 15 years of Armageddon. You can have a fully stocked retreat or a bunker. You can have so much ammo stashed that your floorboards are groaning.  You may have followed your favorite preparedness book’s

guidelines to the letter, and thus have all of the physical aspects of survival in place.

But regardless of this, you may not be fully prepared.

Because surprisingly enough, none of these is an indication of “the prepper mindset.” Those items are a great start, but until your head is fully involved in the game, you’re not actually prepared.

To me, the pinnacle of preparedness is a way of thinking about pretty much everything you encounter. It’s a unique way of looking at a situation, assessing the options, and acting that defines the prepper mindset. Think about any stressful situation that has ever happened to you.  Once you accepted the fact that it had happened you were able to set a course of action. Once you had definitive steps to take, you probably felt much calmer. You took control of the things you could, and you executed your plan.  Only by taking that first step – accepting that this mishap had indeed occurred – could you take the next two.

There are 3 steps to handling any crisis with aplomb. While the execution isn’t always easy, making these steps second nature will greatly increase your chances of survival, no matter what kind of disaster you are facing.

No matter what situation comes your way, the first step is to accept that whatever the event is, it really happened.  This is tougher than it sounds, because our minds are programmed to protect us from emotional trauma.  Cognitive dissonance means that when a reality is uncomfortable or doesn’t jive with a person’s beliefs, that person may opt to believe in something false just to assuage his desire for comfort. Psychologist Leon Festinger, who identified the principal of cognitive dissonance, suggested

“that a motivational state of inner tension is triggered by logically inconsistent ways of thinking.”

If you’re wondering exactly how powerful cognitive dissonance can be, check out Amanda Ripley’s book, The Unthinkable: Who Survives When Disaster Strikes – and Why

.  Ripley, a journalist, covered many disasters of immense scale: plane crashes, natural disasters, and 9/11.  She became curious about the difference between those who survived, and those who did not, wondering if it was dumb luck or if there was some other quality that made survival more likely. She interviewed hundreds of survivors and got her answer.  The ability to immediately accept what was occurring was the quality most of the survivors possessed.

The story that stands out in my mind the most was the one about the people in the World Trade Center on September 11. They described the last time they saw some of their coworkers.  There were many people who simply could not accept the fact that a plane had crashed into the building and that they must immediately evacuate. They gathered their belongs, tidied their desks, finished reports. They didn’t feel the same sense of urgency that those who survived did because the situation was so horrible that they just couldn’t accept it. Their inability to accept the scope of the danger caused many of them to perish in a tragic incident that other people, who acted immediately, survived.

When disaster strikes, you can’t spend 5 minutes thinking, “This can’t actually be happening.”  It is happening, and moving past accepting that propels you through the first step into the second one.

Once you’ve accepted that this incident is indeed going down, you must devise a plan. It’s a whole lot easier to come up with a plan if you’ve spent just a little bit of time doing that previously.

This is where more mental preparedness skills come into play. Last week I put together a list for “Prepper Movie Night.” To build your prepper mindset, develop the habit of watching situations unfold and thinking through them.  What would you do in such a situation? What are the potential pitfalls? What is likely to go wrong?

Watching movies and reading books with survival situations is like a dry run for actual events. Obviously, it’s not the same as having an actual experience, but it’s a good way to practice the skills of assessing a situation and making a plan.

You can also work on building your awareness.  My friend Graywolf told me about “Kim’s Game“.  He said,

Groups including everything from the Boy Scouts to sniper schools to government spy agencies and surveillance teams use a simple game to teach situational awareness and develop your memory. This is a fantastic game that you can play with your kids or your team to get them to be much better at noticing and remembering details.

The game is based on a book by Rudyard Kipling

, and it teaches you to immediately observe your surroundings and commit these observations to memory. I have played a version of this with my kids for years, asking them questions like:

The habit of observing and absorbing information before a situation occurs will help in the creation of your plan. You don’t have to spend the extra time taking in the specifics, because you’ve already done so automatically.

When you make your plan, don’t stop at just one.  The best-laid plans are at the mercy of a fluid situation, and disaster often comes in bundles. If your Plan A doesn’t work, you must immediately go back to Step 1 and accept that it didn’t work, then move on to Plan B.

Finally, this is the step that will save your life.  You’ve accepted the situation and made your plan. Now, it’s time to act.

This sounds easier than it is.  Many people freeze in a disaster situation.  The ability to break this paralysis is paramount to your survival.

“Freezing” is called “tonic immobility” in behavioral science and it is a biological impulse.  A study exploring the “freeze response” to stressors, describes the reaction:

Part of Barlow’s (2002) description of an adaptive alarm model suggests that a freeze response may occur in some threatening situations. Specifically, freezing — or tonic immobility — may overwhelm other competing action tendencies. For example, when fleeing or aggressive responses are likely to be ineffective, a freeze response may take place.

Similar to the flight/fight response, a freeze response is believed to have adaptive value. In the context of predatory attack, some animals will freeze or “play dead.” This response, often referred to as tonic immobility (Gallup, 1977), includes motor and vocal inhibition with an abrupt initiation and cessation… Freezing in the context of an attack seems counterintuitive. However, tonic immobility may be the best option when the animal perceives little immediate chance of escaping or winning a fight (Arduino & Gould, 1984; Korte, Koolhaas, Wingfield, & McEwen, 2005). For example, tonic immobility may be useful when additional attacks are provoked by movement or when immobility may increase the chance of escaping, such as when a predator believes its prey to be dead and releases it.

Some of our data suggested that reports of freeze were more highly associated with certain cognitive symptoms of anxiety (e.g., confusion, unreality, detached, concentration, inner shakiness). This leads to some very interesting speculation regarding whether freeze responses are also manifested cognitively (i.e., the cognitive system, together with the behavioral system, being shut down). There has been some speculation that a form of cognitive paralysis occurs due to immense cognitive demands that occur in the context of life-threatening situations or stressors (Leach, 2005).

So, in the context of this particular study, the freeze response could be related to an overload of stimuli because of the demands of creating your plan.  By having thought through various situations and getting into the habit of quickly developing plans, you can override your body’s natural desire to “freeze” and you can take definitive, potentially life-saving, action.

In an emergency, hesitation can kill you. The faster you can move through steps one and two, and then act, the more likely you are to escape many situations.

Please keep in mind that sometimes, your action actually seems like inaction. For example, a person who is aware they would have little chance of victory in a direct combat situation against a stronger, more experienced opponent might take the action of hiding and being very still. Sheltering in place in some situations is a better course of action than proceeding out into more danger.  The key is to think clearly and assess each situation on its own merit.

Job Loss: We all know the possibility of job loss is not that far-fetched.  If the primary bread-winner in your home became suddenly unemployed, here’s how the 3-step Survival Method would apply:

Car Accident: Sometimes the aftermath of an accident is more dangerous than the accident itself.

Evacuation Order: This almost happened to us one year during wildfire season.

Have you ever had to use your prepper mindset to survive?

When I originally wrote this article, I’d never heard of the OODA Loop. It’s an even more detailed decision-making process that can help you make the best choices quickly.

Studying situations in which others have survived is a valuable way to develop your prepper mindset. Have you ever been caught up in the midst of a situation where your preparedness mindset was helpful?  Want to tell us about it? 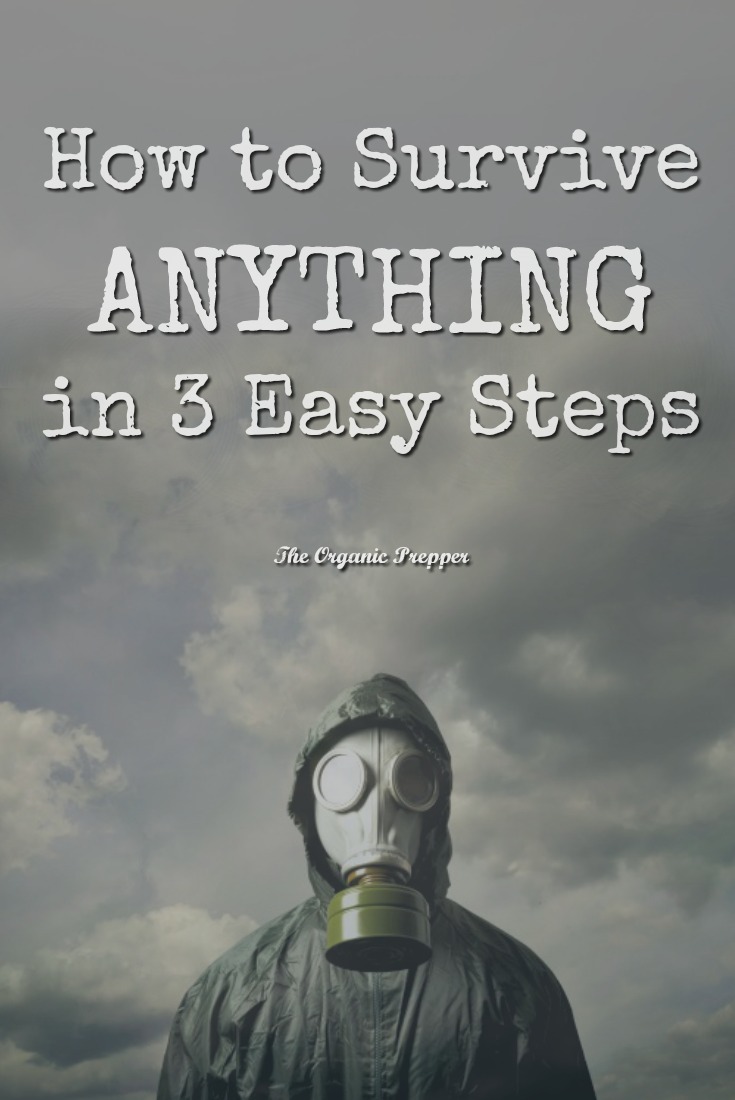