As Famine Looms, Should You Hide Your Stored Food? Here’s What History Tells Us. 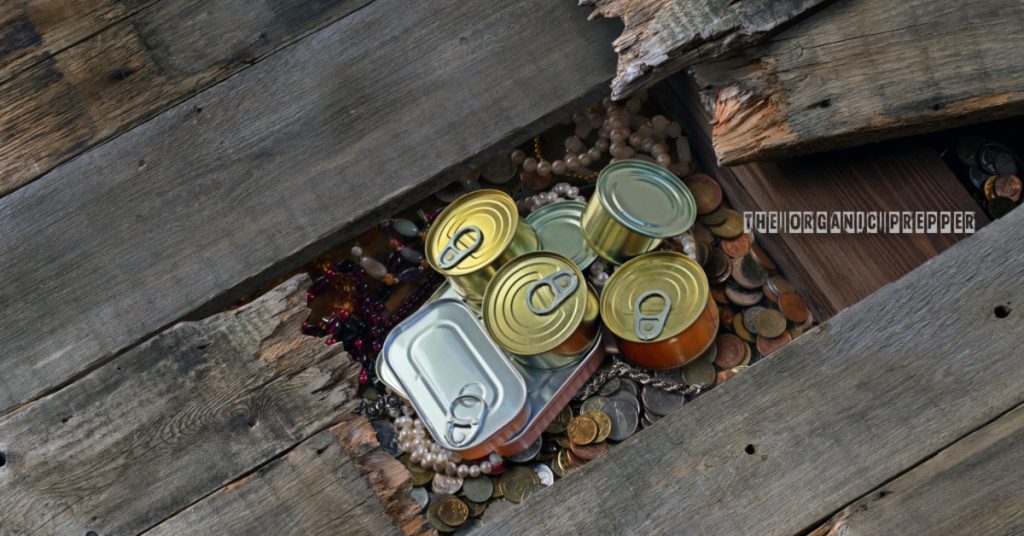 We at the OP have been sounding the alarm on food shortages for a long time now. Whether it’s been the fires at food processing facilities, farm closures, or the issues around meat production, we’ve been talking about it. But now, is it time to focus more on how to store food secretly?

Building a pantry and becoming proficient at producing and processing your own food are important first steps. I’d like to think that different groups of people forming self-sufficient production communities would prevent future problems, but that may not be the case. It looks like there are going to be major problems up ahead.

During the Holodomor in Ukraine from 1932-1933, any withholding of food by farming communities was forbidden. Everything was supposed to go to the cities. Neighbors were encouraged to rat each other out to the authorities.   Anyone suspected of hoarding could expect to have their homes torn apart, walls broken into, and earth dug up around their properties by the police, looking for caches of food.

These capable peasants, these kulaks, who had been born into the self-sufficient lifestyle many people are now trying to recreate, still largely perished.

And this sort of thing is hardly unique to the Soviets.

For an account of the famine in Mao’s China, you can read Wild Swans by Jung Chang. In her chapter on the famine in the late 1950s, she recounts many of the same techniques used by the Soviets. This is hardly surprising; Mao idealized Stalin. They collectivized farms, took everything produced by farmers to ration to the city-dwellers, and left the people in the countryside to scavenge.

Do I think this might happen in the U.S.? Nothing’s impossible. Knowing how utterly incapable many people are in the kitchen, I think it’s more likely violent fights will occur over things like freezer-ready meals once Americans get hungry. I suspect flash mobs like the one that just ransacked a Wawa’s in Philadelphia will become far more common before any kind of coordinated government action.

This is the kind of thing a large, working pantry will largely protect against.

Sure, I still go to the grocery store most weeks, but I don’t absolutely have to. If riots erupt at the grocery store in town (again, I think, one of the more likely scenarios), well, I can just avoid it for however long the craziness lasts. And, in case anyone thinks I’m being ridiculous here, the grocery store in my town within the last few months hired armed guards.

That’s right; there are armed security guards at my local grocery store. Planning for chaos at the grocery store isn’t only for the tinfoil hat wearers anymore; it’s a sober business decision now.

And those of us with home pantries should still be cautious.

All is not well in American farming.

Aside from the catastrophic drought, American farmland is increasingly controlled either by foreign entities or non-farmers with suspect motivations like Bill Gates. As in any other field, centralization makes for easier control, and American farms have been trending toward centralization for a while now.

The government has also become increasingly interested in home gardens. The People’s Garden Initiative has just been expanded.

Tom Vilsack, then Secretary of Agriculture, founded the first “People’s Garden” on February 12, 2009, Lincoln’s 200th birthday. It was called “The People’s Garden” in reference to Lincoln calling the U.S. Department of Agriculture “The People’s Department.”  The project initially began as a resource for urban dwellers to start their own community gardens. It was a way for people who would not otherwise have access to space and resources to grow their own food could get started and, once started, get advice on things like pollination and compost.

Personally, I think anything that helps urban dwellers maintain a connection with nature is great.

But just within the past year, the USDA expanded the program and now encourages everyone to register their gardens.

I find the timing of this very curious.

I love the thought of empowering people to grow their own food…but the federal government doesn’t need to know about what I can and can’t grow, sorry.

Our food production system is slowly being consolidated into fewer hands.

The hands that are still there are being more closely monitored. History doesn’t repeat itself, but it often rhymes, and right now, our political and economic situation rhymes with precursors to very ugly, painful time periods.

Most people reading this probably have plans for producing and acquiring food. Where do you store it? Do you have places on your property that aren’t immediately obvious to anyone glancing through?

I was strangely fortunate in my home purchase. My house is literally an old homesteading cabin with some upgrades slapped on. But not only do I have a true, old-school root cellar with a dirt floor, but the entrance is also extremely inconspicuous. That’s all I’ll say about that.

(How do you build up your emergency food supplies? Read our free QUICKSTART Guide to find out.)

There are some things I’d like to warn people about, in case you are considering building your own root cellar or planning on any kind of underground storage.

Rodents. Can’t say it enough. Rodents. It’s not just me; I’m not a great housekeeper, but I’m not terrible either. My cat keeps them out of my house, but she can’t get to the root cellar. I actually talked to someone responsible for maintaining an old homestead as part of a historical display. We were taking a tour. I noticed the cellar entrance on the property and asked about it.

The employee told me that it was too disgusting to tour. They just could not keep it clean and pest-free enough for the general public. Both of us mused about how impressive humans’ immune systems must have been back in the day.

You have to plan for mice with your root cellar. 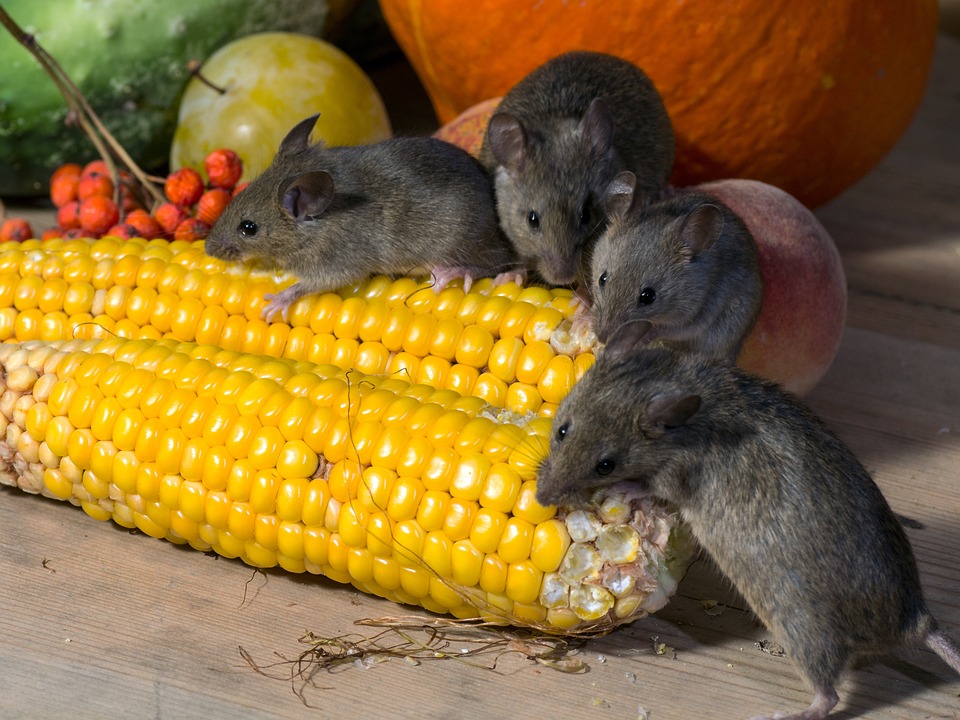 I do use my root cellar for canned goods. I’ve used it for veggies as well, but I pack them in damp sand, cover the tops loosely, and check on them regularly. I also go through copious amounts of mousetraps. I just buy them 72 at a time from Victor. Some people like the electronic ones because you don’t have to handle dead mice afterward, but then you’d need to stock up on batteries too. Also, electronic mousetraps typically don’t work as well in very humid environments, and cellars are pretty humid.

I think the old-school metal snap mousetraps actually work really well. The problem a lot of people have is they add too much bait. If you cover it with peanut butter, then the mouse can just nibble around the edges and avoid the springing mechanism. You just want to put a little bit of peanut butter (or cheese, or whatever) right at that little keyhole so that the mouse has to work for it and springs the trap.

People have been getting creative with food storage for a long time. In Laura Ingalls Wilder’s book The Long Winter, the Wilder brothers built a false wall to conceal the amount of grain they were storing. Pa was able to spot the difference between the indoor and outdoor dimensions of the house, but the rest of the townspeople couldn’t. However, I’d still put money on the presence of mouse turds mixed in with all that seed wheat, and if you’d like to avoid that sort of thing, now’s the time to think about it.

(In case you’re wondering how they keep mice out of commercial grain storage, they typically use aluminum phosphide to kill the rodents. This used to be available to anyone holding a pesticide applicator permit, but states have been making it harder and harder to obtain aluminum phosphide as a private applicator, which is why, for most of us who don’t run a business storing grain, it would be better to simply do our best to keep mice and rats out of the general area.)

Who knows how the events of the next few years will actually play out?

I would love it if our problems got resolved without a violent sacking of the countryside, but we don’t have any guarantees of that. For now, If you’ve been able to build a pantry, maybe the next step is thinking about concealment and how that would play out in the long term.

What do you think? Is hiding your food storage something you’ve considered or focused on?  Obviously, don’t give away too much information publicly, but let’s talk about it in general terms in the comment section below.