An Unholy Government-Corporate Alliance Implemented a Psy-Op on Americans 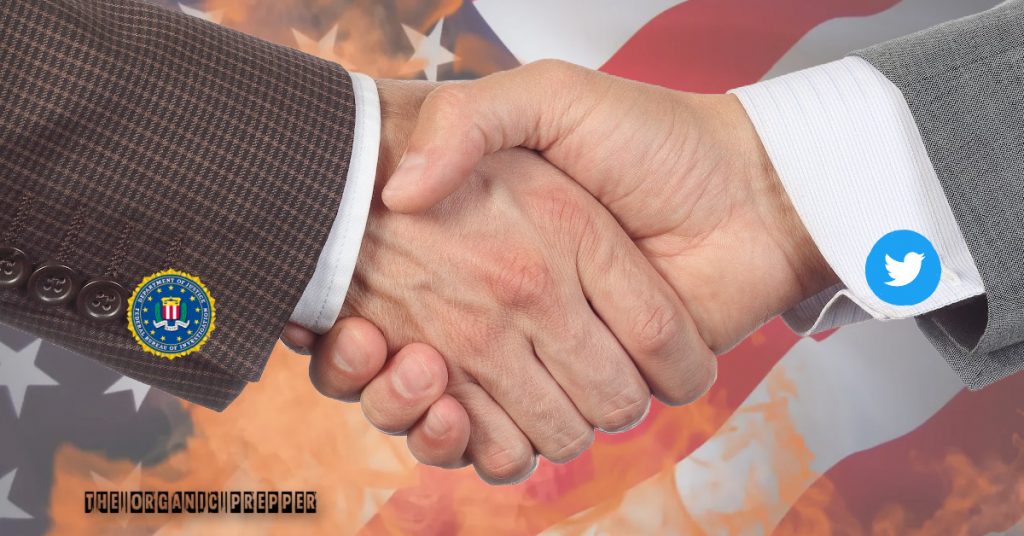 We in alternative media have known about the manipulation of online content for a long time. We’ve talked about it and been called crazy conspiracy theorists for doing so.  Within the past two weeks, however, our complaints were validated when Elon Musk gave a few selected journalists access to huge amounts of data from Twitter, proving definitively how much federal agencies have been involved in the moderation of social media.

The fact is, an unholy goverment-corporate alliance has all but destroyed free speech and deployed a psy-op on the American people.

While Daisy wrote about the Twitter files previously, there are still a few things that I wanted to highlight.

We first learned how visibility was manipulated to fit an agenda.

We found out how Twitter made the decision to ban a sitting president.

Part Three goes back to Matt Taibbi, who posts details about the interactions between Twitter and federal law enforcement agencies in the months before January 6 led to the decision to ban then-sitting President Trump on January 8.

Michael Shellenberger picks up Part 4 and discusses how Twitter banned Trump.  They had been under pressure for years, and in 2018 had publicly stated that deplatforming a sitting leader would “hamper necessary discussion around their words and actions.”  Personally, I couldn’t agree more.  However, in the years between 2018 and 2021 the culture at Twitter regarding free speech had undergone changes, and on January 8, 2021, they made history by deplatforming the President of the United States.

In Part 5,  Bari Weiss reveals internal messaging from Twitter employees about how they knew Trump actually hadn’t violated any policies or incited violence.  But Twitter executive Vijaya Gadde goes through some linguistic gymnastics to convince other employees that Trump was using coded hate speech, and justifies banning him anyway.

Then we learned more about the disturbing involvement of our own government.

Matt Taibbi takes the lead again in Part 6 , discussing the very cozy relationship between Twitter and federal agencies.  He provides evidence of regular meetings between Twitter executives and the FBI.  He also provides evidence of how minutely the FBI flagged accounts as problematic.  Most people, at this point, know about Twitter banning Babylon Bee; however, they also flagged many low-follower accounts for similarly satirical posts.

We live in a country with an out-of-control migrant crisis and skyrocketing crime rates; meanwhile, our tax dollars for federal law enforcement are going to agents flagging stupid jokes online.  It’s indefensible.

Part 7  goes back to Michael Shellenberger, who takes us back to the Hunter Biden laptop story.  Shellenberger provides quotes from both Twitter’s Yoel Roth and Facebook’s Mark Zuckerberg about being repeatedly warned by the FBI about Russian interference in the 2020 election.  All this despite the fact that no actual increase in Russian online activity had been observed, as the FBI themselves admitted.

One of the most shocking things, to me, was Shellenberger’s #22, where FBI Agent Elvis Chan arranges for Twitter executives to have temporary security clearances starting in July 2020.  His reasoning was that he wanted to make data sharing extra-easy in the months leading up to the 2020 elections.

Security clearances are supposed to be a big deal.  If you want a career requiring top security clearances, government representatives interview your family, friends, and even prior roommates to get a feel for what kind of person you are.  They find out about what stupid stuff you did in college, how much international travel you’ve done, your foreign contacts, any dirty habits you might have that people could potentially blackmail you over, and above all your loyalty to the U.S. government.  Security clearance is supposed to be something the government takes supremely seriously, and the FBI issued temporary clearances to the social justice warriors at Twitter?

And maybe they did think twice about it, because by August 2020, Twitter had hired so many former FBI agents that they had their own group within Twitter.  Shellenberger provides a great deal of evidence about the increasingly close contact between the FBI and Twitter.  Not only has the FBI given Twitter over $3 million since 2019, Twitter’s top executives are full of former FBI employees, as the New York Post recently reported.

In Part 8, Lee Fang details the relationship between the U.S. military and Twitter.  For years, Twitter had been committed to avoiding interference by state actors.  In 2018, they closed accounts related to Russian propaganda efforts.  In 2020, they closed almost 1000 accounts associated with the Thai military. The U.S. military has not been so scrutinized; fabricated accounts using deep fakes have been allowed, as long as they serve American interests.

And in a way this isn’t completely unreasonable; Twitter is an American company.  Malign foreign actors such as ISIS do recruit online and it is not unreasonable that we would want to counter that kind of activity.

We’re all victims of a legalized psy-op.

This, I think, is a problem.  I’m not anti-military at all; I think most of the people that sign up do so out of a genuine desire to serve.  But, as Tolkien (a combat veteran himself) pointed out again and again in Lord of the Rings, soldiers always need to bear in mind what they fight for.  What kind of a people will be produced, when they are continually being manipulated without their knowledge?

It’s like small children and Santa Claus.  Sure, it’s fun to pretend when they’re little, but at some point you need to let them grow up and understand that Christmas is something Mom and Dad budget for.

Outside the military community, Americans are mostly blissfully unaware of how much intervention goes on, both at home and abroad.  It’s time for the American public to grow up; I don’t think the “kidult”  phenomenon is a coincidence.  The workings of the intelligence community need to be brought to light, not because the intelligence community is full of intrinsically bad people, but because the coddling and manipulation has turned a high percentage of American citizens into the amorphous blobs from Wall-E.

Government and corporate alliances have destroyed free speech in favor of creating narratives.

Many of us have been watching this for years, wondering how things have gotten so bad.  The Twitter Files revelations give us a great amount of detail into how this government-corporate online alliance actually functions.

You may be thinking to yourself, so what?  I know all these guys are crooks.  That’s how I felt with the whole “Russian disinformation” thing back in 2016, when people claimed Russia helped Trump steal the election.  I ignored it; I thought my opinion of politicians couldn’t sink any lower.

However, as Matt Taibbi points out in Part 6, it’s important to realize how much the Russian disinformation rhetoric in 2016 set the stage for the massive online manipulation we see now.  We in the U.S. like to think that we’re all about freedom of speech, and the Bill of Rights, and so on.

Until there’s some kind of defense emergency.  That’s how the U.S. government justified industrial overreach back in the 50s, with the first Defense Production Act, a government program that just doesn’t want to die.  That’s how we justified setting up the mass surveillance apparatus via the Patriot Act after 9/11.  And since 2016, powerful players have been trying to get the general public to suspect any piece of information not emanating from official channels as being Russian disinformation.

The reason the Twitter data dump has been so important is that, it provides hard evidence that those of us who have long suspected a great deal of government interference in the online community were correct in our assumptions.

In July, Daisy wrote about the OP getting downgraded by Newsguard. To sum up: she refused to lie, she refused to declare that this is a left- or right-leaning website, and so we got downgraded.  This affects the way search engines display the website; it makes it harder for this site to earn money, and it makes it harder for regular people wanting to research a particular topic to find a wide variety of sources.

It’s easy to ignore what goes on with sites like the OP because we’re small, independent, and no one here has deep pockets.  But what goes on here does go on everywhere else, whether or not people realize it.  In Bari Weiss’s Part 2, #11, she quotes a Twitter engineer saying, “We control visibility quite a bit.  And we control the amplification of your content quite a bit.  And normal people do not know how much we do.”

Now, the evidence has been presented for everyone.

Well, now the information is widely available, for the normies who do want to know how much they do.  We need to take advantage of this transparency while we can, because who knows how long it will last.  Situational awareness is vital to prepping; we need to be very intentional about where our information comes from.

There will be more to come on this, I’m sure, and we’ll continue to monitor the situation.  Our only agenda on this website is to help people help themselves by staying accurately informed, so they can make the right decisions for themselves and their families.

What are your thoughts on this government involvement?

Are you concerned about the power the federal government has had over the visibility of alternative opinions on social media? Do you feel this is blatant propaganda? Did any of the revelations in the Twitter Files surprise you?