The Defense Production Act Invoked Due to the Formula Shortage 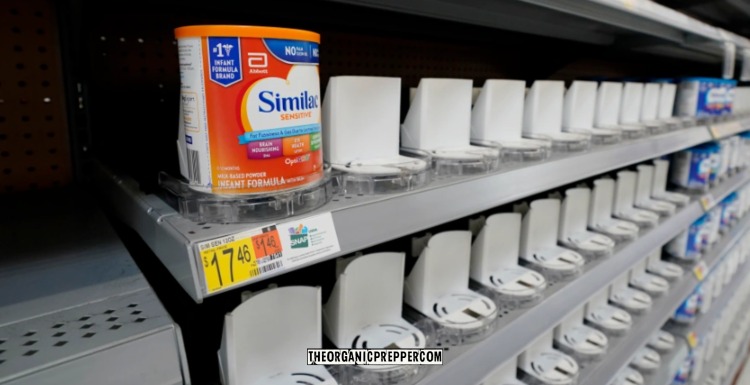 The latest example of disruption in the American supply chain is the formula shortage. Ensuring our next generation of citizens has a robust, resilient food supply has not, apparently, been a big priority for our government or industry leaders, and parents across the U.S. are panicking.

If you are one of the parents scrambling for formula, Organic Prepper has had some articles (HERE and HERE) lately that you might find helpful. I really, really wish you the best.

A formula shortage should never, ever have occurred to begin with.

The shortage has been caused by a combination of overly-burdensome regulations and industry consolidation, where only three companies produce the overwhelming majority of infant formula. The U.S. government has created a problem through bureaucratic incompetence and now granted itself emergency powers to deal with a problem that should never have existed in the first place. These emergency powers may very well impact all of us, whether or not we have a formula-dependent infant in the house.

(Want to learn more about building up your food storage? Check out our free QUICKSTART Guide to our 3-layer food storage plan.)

On May 18, Biden invoked the Defense Production Act to speed up the production of infant formula. What, exactly, does infant formula have in common with a Korean War-era government act?

President Harry Truman enacted the original D.P.A. in 1950 in response to the invasion of South Korea. The War Powers Acts enacted in 1941 and 1942, when the Americans were engaged in World War II, inspired much of the language behind the D.P.A. in its original form.

The D.P.A. granted the president authorities, including (but not limited to) the demand that manufacturers give priority to defense production, to requisition materials and property, to expand government and private defense production capacity, ration consumer goods, fix wage and price ceilings, force settlement of some labor disputes, control consumer credit and regulate real estate construction credit and loans, provide certain antitrust protections to industry, and establish a voluntary reserve of private sector executives who would be available for emergency federal employment.

However, the U.S. government has taken these powers into its own hands before.

It would not be unreasonable for them to do so again. And the D.P.A. itself has been reactivated more than 50 times since its original enactment. The document doesn’t want to die. Or rather, our government representatives don’t want it to.

And why would they?

The D.P.A. itself contains very sweeping powers. Even the powers that have supposedly expired (like the power to requisition property) haven’t really. Ask anyone who has lost property in the name of eminent domain. This goes on far, far more than people realize.

Your preps are considered fair game.

Titles I, III, and VII are still active, and Section 102, regarding the hoarding of designated scarce materials, is something preppers, in particular, should be aware of.

Section 102 of the Defense Production Act states that:

In order to prevent hoarding, no person shall accumulate (1) in excess of the reasonable demands of business, personal, or home consumption, or (2) for the purpose of resale at prices in excess of prevailing market prices, materials that have been designated by the president as scarce materials or materials the supply of which would be threatened by such accumulation. The president shall order published in the Federal Register, and in such other manner as he may deem appropriate, every designation of materials, the accumulation of which is unlawful, and any withdrawal of such designation.

In making such designations, the president may prescribe such conditions with respect to the accumulation of materials in excess of the reasonable demands of business, personal, or home consumption as he deems necessary to carry out the objectives of this Act [sections 4501 to 4568 of 50 U.S.C.] This section shall not be construed to limit the authority contained in sections 101 and 704 of this Act [sections 4511 and 4554 of 50 U.S.C.].

In sum, this means that the president retains the power to designate certain articles as “scarce” and then outlaw their accumulation.

So, if baby formula gets designated scarce, and you’ve been snagging any cans you see of the one hypoallergenic brand your baby can tolerate, in theory, you could be prosecuted.

Of course, this is not happening yet. But the legal framework is in place.

So, what’s a prepper to do about the Defense Production Act?

For starters, don’t draw attention to yourself when you shop. Having an emergency stockpile of food is reasonable. Pulling the last bag of beans away from some old lady who can barely reach the shelves at the grocery store is not. I know this happens. Don’t be one of those people. The best way to stockpile food is slowly by grabbing one or two extra items each trip. Don’t show up and plan to empty the shelves. I used to work at a grocery store. Trust me, the people that do this attract attention.

My grocery stores started having big gaps in 2020. Since then, I will grab extras of key items if they go on sale or if it’s one of those “Buy 5, get $1 off each!” type deals. But I won’t clean them out. I keep enough of a rotating stock of various things at my house that I don’t need to. I started that process a few years ago, and it is never too late to start building yourself a little pantry. Just do it as anonymously as possible.

There are some specific things about formula, however.

Formula’s a little different because it’s not something many people can easily swap out for different brands. It seems like a large number of babies really need specific types. Even breastfeeding moms often have to tweak their diets to accommodate babies’ systems. I had to stop drinking milk for about six months when my daughter was an infant because she couldn’t tolerate it in my breastmilk. I would have a hard time criticizing someone raising an infant with dietary issues, trying to stock up on formula.

If I had a healthy six-month-old, I would probably see how much of their caloric intake I could shift into things like quality whole-milk yogurt, avocados, and liver. Both of my sons tolerated whole-milk yogurt very well at about six months of age. If I had a newborn that needed hypoallergenic formula, frankly, I’d probably be trying to get as much as I could and praying a lot. Those parents are facing a scary situation.

Formula has not been designated a “scarce resource” yet, but it might become one soon.

Other food items may be designated scarce, as well. We need to be aware and pay attention. This is not silly tinfoil hat stuff. Back in the 1940s, when items such as coffee and sugar were being rationed, government officials would occasionally go into people’s houses and conduct searches for hoarded items. This happened to some elderly relatives I had living in Chicago. They never got in trouble, but it did happen. Government officials have conducted searches for excess amounts of food. They might start it up again.

(Looking for more information on emergency evacuations? Check out our free QUICKSTART Guide.)

It’s not time to panic. But it is time (long past) to pay attention to some of these laws enacted by our government. From lockdowns to jab passports to equating differing scientific opinions with domestic terrorism, our government has accumulated an incredible amount of power during the past two years. Enacting the Defense Production Act is yet another power grab.

It may also be another way to enforce conformity.

During both the era of Soviet collectivization and the Cultural Revolution, food was confiscated and given out preferentially to the cities to encourage people to abandon the countryside and become good little factory workers, living in apartments and utterly dependent on the state for their rations.

Is our government headed in the same direction? We need to pay attention.

Tell us your thoughts in the comments.