Fuel Prices Are About to SKYROCKET. Here Are the REAL Reasons Why. 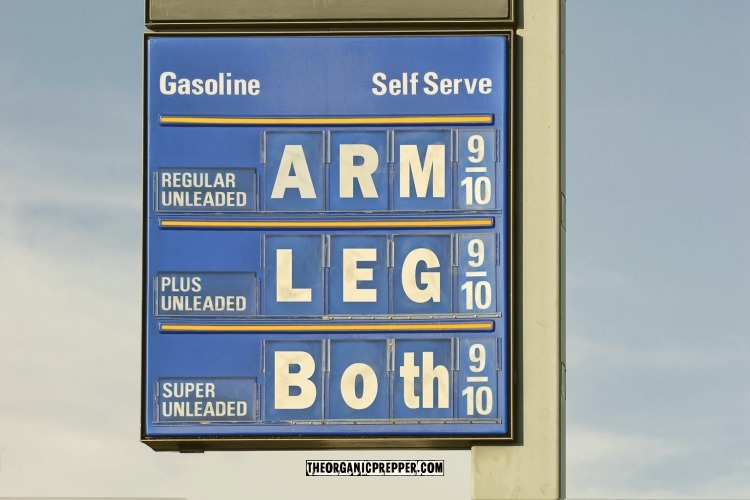 After a brief break in high fuel prices, those prices are now rising with a vengeance. Fuel prices are up more than 25 cents a gallon nationwide in the last month alone and are now at an average of $2.68 a gallon for regular. It’s only going to get worse.

Fuel prices are spiking…or will soon.

Fuel prices are expected to spike in the coming weeks and even more this summer.

Several mainstream articles warn of the coming rise in fuel prices. All of these articles provide various reasons why the prices are rising. For example, some articles report the increase in prices is “just the market.” Others say it’s COVID. None of these reports say it’s the oil companies, the Great Reset, or Wall Street.

In other words: Go back to sleep, America, and pay through the nose when you wake up. And don’t you dare complain about it.

The rise in fuel prices is nothing new. Being told to dismiss it and go on as usual is also nothing new. This article tells you why gas prices skyrocketed in 2018 as well as a look at rising prices back in 1973.

Why are prices rising this time?

YAHOO offers several different reasons for the rise in prices.

COVID: Long before the storms, the oil and gas industry was reeling from plummeting fuel sales caused by COVID. By late 2020 there were more than a dozen refinery closures that reduced U.S. production by more than 1 billion barrels per day.

COVID VACCINES: “As more Americans are vaccinated, and life begins to return to something closer to normal, people are likely to drive and fly more. And that trend will contribute to rising fuel costs.”

SUMMER: American drivers could find themselves spending close to $3 a gallon for gasoline, on average, by Memorial Day, according to both AAA and GasBuddy.

Those forecasts factor in the switch to pricier summertime blends of gasoline, expected to begin rolling out in March. Higher-grade gasoline is used in summer months to reduce emissions that cause smog; those blends can cost up to 15 cents more per gallon, according to the service station trade group NACS.

Eleven refineries in Texas were shut down at least partially due to the extreme winter temperatures, taking as much as 20% of the country’s total refining capacity offline, says the price-tracking website GasBuddy.

STIMULUS CHECKS: Congress is working on giving Americans another $1.9 trillion in COVID relief, including a third round of stimulus checks. The aid is expected to help lift gas prices as consumer spending gets a shot in the arm.

Yes, all of those factors play a part in the overall market and thus on oil prices. So does the Biden Administration’s cancellation of Keystone XL and the halt of approval of new drilling permits on federal land and some on private land. In America, there simply will be less oil produced, which will affect oil prices.

It is also important to remember that OPEC has slashed oil production, reducing the amount of oil on the market and driving up prices.

Although gas prices will no doubt occasionally go down from time to time, the trend unquestionably moves upward. When there is a downward trend in demand (i.e., the economy is in the tank, and no one can afford gas), prices still miraculously go up due to “lack of demand.” When there is an increase in demand, prices still go up because of a “lack of capacity,” “scarcity,” or some other market-centered or manufactured excuse. Regardless of the situation, the prices inevitably move up. This is the hallmark of a cartel.

Sara Banaszak of the American Petroleum Institute confirmed this fact when she stated to the Washington Post, “I wouldn’t say you would expect inventories to dictate the direction of prices.”

What are other forces behind the rise in fuel prices?

Market forces such as supply and demand do play a role, as do scarcity and production levels. Greed is also a significant factor, with oil companies making massive profits as customers pay much higher prices. However, since oil is denominated in U.S. dollars, devaluation also plays a role. A drastic decline in the dollar’s purchasing power due to inflation, overprinting, and stimulus money (not credit stimulus) due to COVID shutdowns, for instance.

One of the most critical factors rarely discussed is the role speculation plays in oil prices. A report released in 2011 by Goldman Sachs freely bragged that speculators like themselves were the reason for a $27 a barrel hike in crude oil price. In fact, according to Goldman Sachs, the speculation industry is well known to provide investors with returns of up to 25% of their investment in just four months.

Don’t get caught with no gas in your tank

As with most things from MSM, there is more to the story of rising oil prices than what MSM would have us believe. There were even more people driving two years ago when prices were lower, and millions of Americans hadn’t been forced into poverty.

Make no mistake, prices are rising, and they are going to continue to do so. It would be wise to start planning strategically and financially for the inevitable.

And also keep in mind that increases in the price of fuel increase the price of transport. So anything that gets transported could soon become even more expensive due to the increased cost of getting it to you. Just what our ailing supply chain needs, right? So if you were planning to stock up, now would be the time to do so.

How do you feel about the increase in fuel prices and the speculation as to why?

Let’s talk about this in the comments below. How do you feel about having to pay more for gas yet again? What are your plans when the SHTF and people are scrambling for fuel?