Things Keep Getting EVEN WORSE in Texas: Frigid Temps, Blackouts, and an “Overwhelmed” Water System 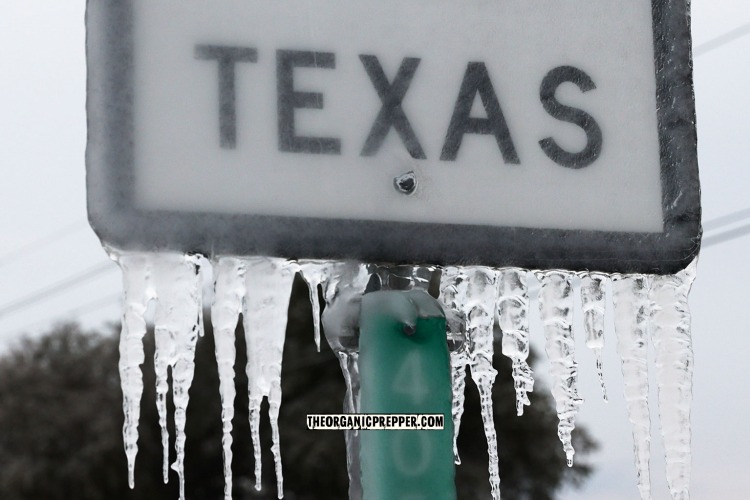 It’s not the end of the world. Not yet.

But, take a look at what is happening in Texas. Some would say that is a preview of what’s to come for the United States if we don’t do something major to reverse it. Austerity and scarcity, much of it created by poor maintenance of the infrastructure and more under the guise of saving us from “climate change”, is coming to America.

Fresh on the heels of intentional, planned blackouts in Nebraska and Texas, due to frigid temperatures and a power grid that couldn’t handle demand, Texas is now facing yet another crisis – “overwhelmed” water systems.

It’s important to keep in mind that the current weather conditions are very unusual for Texas. Many homes there aren’t built to withstand temperatures that freeze water pipes or with secondary heating systems that aren’t connected to the grid. The municipal infrastructures were also unprepared for weather of this magnitude.

Texas water systems are damaged and leaking, leaving residents under a boil advisory

Much of the damage done to the Texas water systems have come from leaks caused by frozen pipes. And those leaks are pushing the entire water system to the brink. Approximately 13 million Texans, according to the Executive Director for the Texas Commission on Environmental Quality, Toby Baker, are under a boil water advisory. More than 700 water systems are affected.

According to Austin Water Director Greg Meszaros, in Austin, the water supply lost 325 million gallons of water due to burst pipes.

“We know that there are tens of thousands of leaks,” Meszaros said. “As the fire department indicated, they have responded to thousands upon thousands of burst pipes.”

“That is an incredible amount of water. Nothing I’ve ever seen before,” said Meszaros regarding the 325 million gallons of lost water.

Although Texas expects warmer temperatures in the next week, the state faces more incredibly low temperatures on Friday and Saturday nights. Twenty-five million people are already under a hard freeze warning through Friday morning for parts of Texas, Oklahoma, Arkansas, Louisiana, and Mississippi.

For more information on water preparedness, check out this article as well as this one about cleaning without running water.

Take a look at the dire conditions of some Texas residents as reported by CNN:

In Carrollton, north of Dallas, John Mays, Jon Milton Blackburn, and their three children had no heat or water in their home starting early Monday. To fuel the fireplace, the family resorted to ripping up baseboards to stay warm.

It was either that, or we were going to go after the dining room table next,” Mays told CNN’s Don Lemon on Thursday.

After a water pipe burst, the family sought shelter at their church and expressed gratitude for local leadership providing warming stations.

If you are in an area enduring this weather check out this article about preparing for a blizzard. It contains lots of links to help address a wide variety of issues you may be facing. If you need to buy supplies but the items you want are sold out, here are some substitutes that you may be able to locate.

In Texas, some hospitals have been operating without water, including Houston Methodist Baytown Hospitals.

“They have been creative, from trucking water in for consumption to collecting rainwater to use for flushing toilets,” Smith said. Both facilities, Smith said, were “still effectively caring for our patients.”

The state asks Waco residents to conserve water, and commercial users such as manufacturers are being asked to do the same. Car washes and laundromats are being encouraged to stay closed, in yet another blow to the private economy.

“Our water supply is critically low. We are currently pumping all we can, but the main problems we are facing right now are leaks and high usage,” Meek said In a video message Thursday. “We are pumping twice our normal daily usage.”

If things get worse, Meek warned that some areas might not have water at all.

“And if system conditions worsen even more than that, the fire department could not have water for firefighting,” he said. “Our city staff has developed and continues to develop alternative methods for fire protection.”

One fire department near San Antonio was already the point of no return. Bexar-Bulverde Volunteer Fire Department Chief Jerry Bialick said that the water supply was the main issue as his team fought a large apartment fire in San Antonio. Many of the hydrants themselves were frozen, and there was no water.

Governor Greg Abbot announced Thursday that the state sought a major disaster declaration from the federal government, and he spoke to President Joe Biden as well.

Abbott says he intends to ask the legislature “to mandate the winterization of Texas’ power system. And for the legislature to ensure the necessary funding for winterization.” He also spoke about ERCOT (Electric Reliability Council of Texas), which manages the state’s power grid, and took responsibility for its failure.

But taking responsibility in a speech and fixing the issue at hand are two different things. (Assuming that Abbott and the legislature want to fix the problem, to begin with.) Lower living standards, austerity, lack of infrastructure, and the “green energy” fiasco have all contributed to Texas’s crisis.

The details can be argued all day.

But Abbott’s statements hold little substance for a freezing family burning their floors and furniture to stay warm.

The one thing we can all be sure of is, whatever the crisis might be, depending on the government to come and save you will always end in disaster.

What are your tips for Texans?

The weather they are facing is extremely unusual for this part of the country, so it’s certainly understandable that many people found themselves unprepared for such an event. Homes there aren’t built to withstand days with frigid temperatures and no grid-connected heat. Do those of you from colder climates have any tips that might help our Texan friends get through this difficult time with no power, no water, and bitterly cold temperatures? Please share your advice and good wishes in the comments.