SELCO: Everything Is Fluid When the SHTF – Including the Rules of Survival 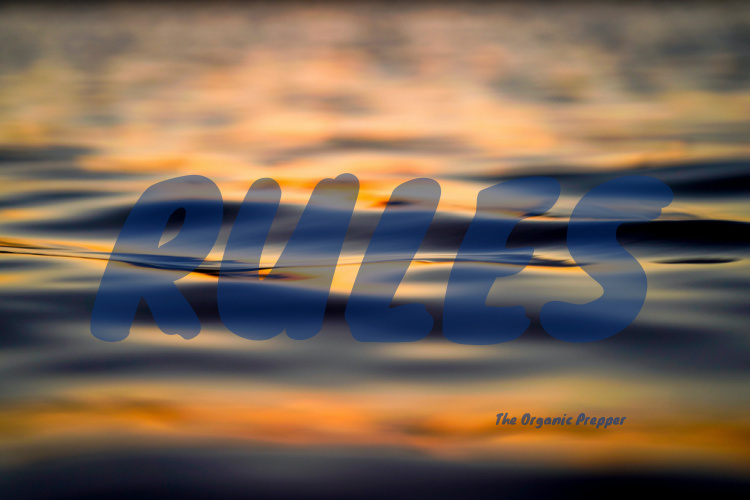 In hard and weird times, everything is fluid.

I bet you have heard many times that expression, but what does it actually mean?

“Rules” must also be fluid.

It is especially important in light of the “teachings” that you can find in mainstream survival where the majority of “masters of survival” give you rules on how to survive, but fail to recognize that rules are there for bending, for changing, even for trashing. It’s all connected with the timing of events, particular or current situation. (Here are some pieces of advice I find particularly bad in the survival world.)

So, again, if someone is giving you rules (including me), never forget that you need to take it as a starting, point, or let’s say blueprint, or foundation only, that you should refer to when times get tough. BUT you must always be keeping in mind that the situation CHANGES, so the rules might change too.

I know the prepper world today is consistent with 99 percent of “lists what to do in order to survive” and I also know people like to have clear pointers and clear instructions on what to do and how to prepare, which is OK.

The problem is that the majority of folks want someone else to do the job of figuring it out and give them the solution, while they are sitting in a chair in front of their computers.

So you’ll get that, but in essence, it will be usually wrong or false.

You can get pointers, advice, and maybe the mental side of it or some particular skills, but you are still gonna have to move your ass from the chair and do the rest of the job.

Do not find yourself in the middle of a collapse with wrong instructions on what to do because you were too lazy to research it, or because you worked on someone else ‘s foundation and experience based on your own settings.

Here are some of the variables you will face.

Fluidity may sound like a philosophical thing, but it is real, and it is based on many variables like :

And so on and so on.

So do you really believe it is only important for you to have enough guns or enough cans of food to survive without paying attention to how the situation changes around you?

If you take all the above and mix it up you can see how many ways and directions the situation may and will change for you in 3-4 weeks if something bad happens.

In a world-level situation, the changes are even worse. Everywhere, it is very fluid. What you can do is try to figure how the situation may change in your own case, in your own small “survival circle”.

What can you do?

Could this fluidity situation mean you might get low on some prescription drug even before a real SHTF? Or that ammo will become hard to find? Or that your neighborhood will become more targeted because law enforcement is stretched to its edge? Does racial tension mean it is a good moment to move from your current place where you live? What can you expect in those terms if law enforcement go “out on holiday”? Will you become a target?

Timing is very important, not only when the SHTF but also in the months before SHTF, while you still have time to change things in an easy way -without shooting someone maybe.

On the lower-level, a real-life good example of the fluidity of the situation and correct timing of your actions would be videos of folks suddenly showing up (dressed nicely, driving a nice car) in the middle of a masked and hooded rioting mob. They failed to understand how the situation was fluid, and they timed it wrong, so they become targets.

Just because you failed to understand that situation is FLUID.

It is a basic example of it, and it is even an example from a world that is still working normally.

When the SHTF it’s even more urgent.

When the S. hits the fan for real, all that fluidity goes on a higher level. It goes much faster, and the stakes are much higher.

While today you might get beaten or your car might get scratched or trashed because you find yourself in the middle of a riot, when the SHTF you would probably end up robbed and dead.

Well simply because stakes are higher (resources) and the repercussions (possibility of arrest and punishment) are lower or even nonexistent.

So, again it comes to the fluidity and timing. It comes to those good old calculations on how badly people want something and how badly they are scared of something in process of getting the resources.

Now, this means that YOU need to recognize how and especially WHEN the situation has gotten so bad that people WILL kill you for your resources because they are not scared that punishment is coming for them.

Here you may say, “But I can level those stakes with having ME as a possibility of punishment for those who want to take stuff from me when SHTF.”

Of course, you will, and you should be ready for it actually. But much before that, you should implement these steps:

And only then, maybe in third place. comes your will to defend.

Your actions must reflect the fluidity of your situation.

All of the above are only examples of the topic of the fluidity of the situation, and how your actions should reflect it.

When the SHTF, things happen faster, on a higher scale, and in worse ways than today. You should always keep that in mind when you are planning your own strategy of survival.

It comes into play in every aspect of your life when the SHTF (and even before): trading, fighting, resource gathering…

Simply know that the situation CHANGES all the time. You must adapt to it.